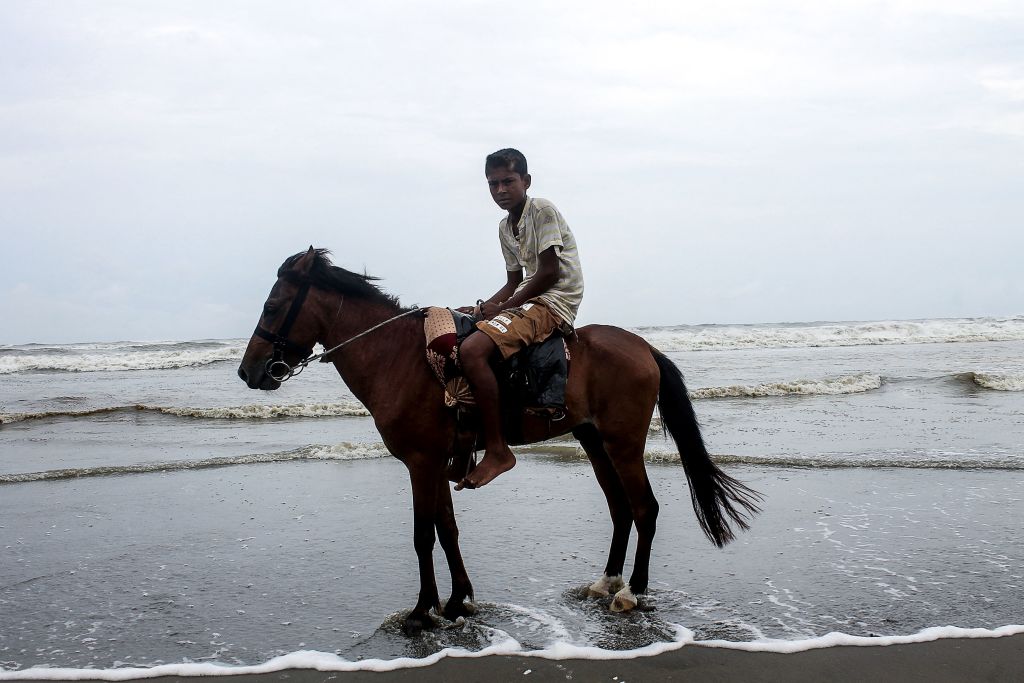 A youth rides a horse while he waits for customers on a beach in Cox’s Bazar on June 16, 2021, as activists warned that such horses used for tourist rides were dying with their owners unable to feed them due to lack of income during the country’s coronavirus lockdown. (Photo by TANBIR MIRAJ/AFP via Getty Images)

FIVE more horses died of starvation in Bangladesh’s popular resort town of Cox Bazar in June, their owners said, indicating the crisis the country’s tourism sector is going through amid the coronavirus pandemic.

Twenty-one horses which carried tourists along Cox’s Bazar beach in southeastern Bangladesh died in one month, their owners said, after a lockdown imposed from April 14 saw visitors to the scenic spot dry up.

The owners – who make ends meet through horse-riding services for tourists on the beach – said they had no income to buy fodder for the horses and had to take out micro-loans just to feed their own families.

“Tourist arrivals in the beaches have ground to a halt. My horses are idle,” Farida Begum, spokeswoman of the Cox’s Bazar Horse Owners Association and a horse owner herself, said on Wednesday (16).

“Five more horses have died since the start of the month… I’ve borrowed money from a micro-lender to buy food for the horses. I had to mortgage my sister-in-law’s ornaments to pay a loan instalment.”

Begum said another five of the remaining 64 horses at Cox’s were “ill due to starvation”.

“If we soon cannot start feeding them properly, they will die as well,” she said.

Another horse owner, Rezaul Karim, said he was struggling with “neck-deep debt”.

“The horses are turning violent and bad-tempered due to hunger. Often, they bite each other while roughhousing. This is a matter of concern as they are usually very tame animals,” he said.

Activist Ibrahim Khalil said government officials did not take the deaths of the animals seriously as he warned the situation could worsen if the government did not step in to help the owners.

But Suraiya Akhter, one of the town’s administrators, denied that the horses had died from starvation and said the owners had not asked for fodder.

“We provided food for 16 days and later we heard a private company would look after the food of the horses,” Akhter said.

The nation of 168 million people, which remains in lockdown, has reported nearly 840,000 virus infections and more than 13,250 deaths so far.