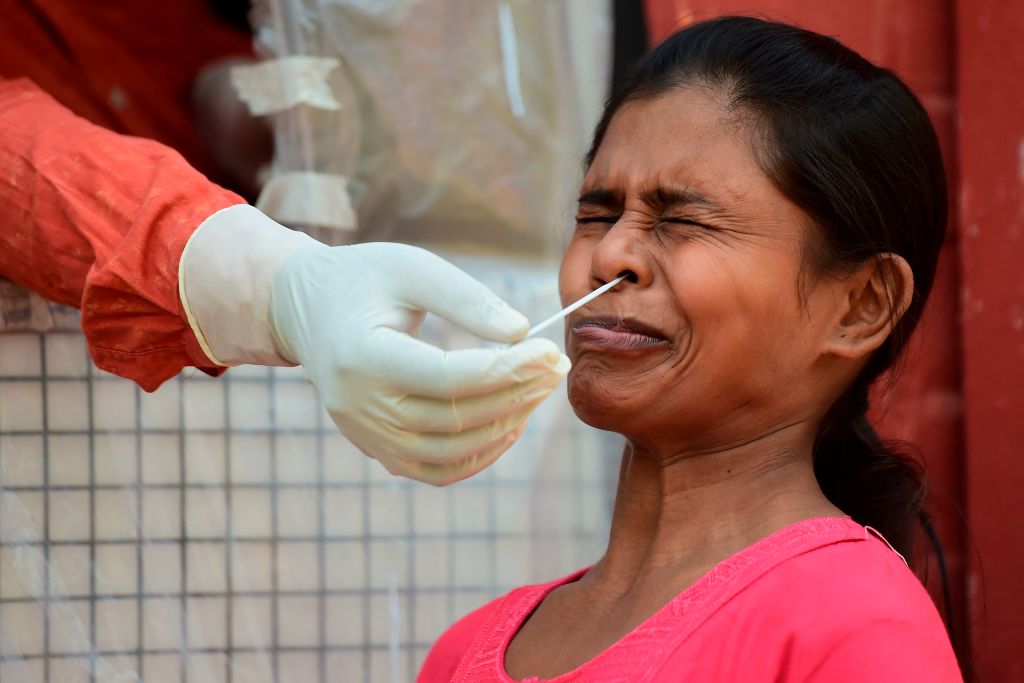 A health worker collects a swab sample from a woman to test for the Covid-19 coronavirus at sample collection centre in Allahabad on October 29, 2020. (Photo by SANJAY KANOJIA/AFP via Getty Images)

INDIA’s Covid-19 cases passed eight million on Thursday(29) just ahead of the busy festival season in the country.

India reported its first coronavirus infection on January 30, 2020, and now it is world’s second-worst-hit country after the US.

Textiles minister Smriti Irani has become the latest of several cabinet members to test positive for the virus.

There have also been more than 120,000 deaths across the country of 1.3 billion people, according to the latest government figures.

Only the US has seen more infections, with 9.1 million confirmed cases and nearly 230,000 deaths.

India has one of the world’s lowest death rates and the government has highlighted the slowing number of new infections in recent weeks.

But authorities are preparing for a new surge after Diwali, the country’s most important religious festival on November 14.

“All states need to be careful during the coming festive season. This caution must be exercised for the next three months at least,” Health Minister Harsh Vardhan said in a recent statement.

A stringent lockdown imposed in March has gradually been eased as the government seeks to reboot the economy after the loss of millions of jobs nationwide. But experts say this has helped spread the disease.

New Delhi recorded 5,000 new cases on Wednesday(28), its highest daily figure since the outbreak of the pandemic. Officials have warned that the capital could see more than 10,000 cases a day in the next wave.

Experts have said crowds gathering for Diwali and other festivals, colder temperatures and the annual winter pollution crisis could worsen the impact of coronavirus cases in Delhi.

Authorities are also worried about the southern state of Kerala and West Bengal in the east which have seen worrying spikes in cases.

Suresh Kumar Rathi, an epidemiologist from health charity Public Health Foundation of India, said that if India took “proper precautions” now it could beat a new wave of infections but indiscipline would lead to a “disastrous” unravelling of recent gains.

Prime Minister Narendra Modi has also warned the public in recent speeches that they were being “careless” in giving up social distancing and other precautions.

“The virus is still out there. It thrives on our complacency,” Modi said in a Thursday interview with the Economic Times.

While businesses and theatres have slowly started to reopen, schools and colleges remain shut in most cities and international flights are severely limited.

India currently only has air links with a small number of countries including the US, France, Germany and Britain.

India’s domestic air market was the world’s fastest growing before the pandemic but is currently operating at less than 60 per cent of last year’s capacity.