Modi sworn in ahead of unveiling revamped government 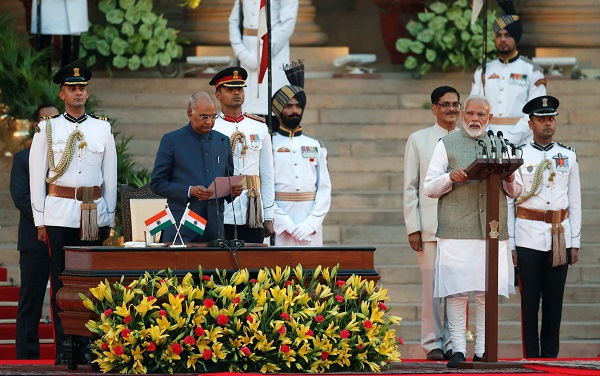 INDIA’S prime minister Narendra Modi was sworn in Thursday (30) in front of cheering supporters ahead of unveiling a drastically revamped government for his historic second term.

Modi was the first of more than 50 cabinet ministers and deputy ministers to take the oath of office at the presidential palace in front of 8,000 people including South Asian leaders, Bollywood stars and leading political figures.

Modi, whose Bharatiya Janata Party (BJP) made history by increasing their majority in a second straight landslide election win, was to announce new finance and foreign ministers as well as find a top post for his trusted enforcer, BJP president Amit Shah.

Supporters in the crowd chanted “Modi, Modi” as he walked up to take his oath of office in Hindi.

Modi was to announce his new cabinet in the hours after the ceremony in the gardens of the presidential palace.

A new finance minister was guaranteed after the influential outgoing minister, Arun Jaitley, 66, announced Wednesday (29) that he would not serve again because of poor health.

Outgoing foreign minister Sushma Swaraj was not among the group to take the oath meaning she would also be replaced.

Opposition leader Rahul Gandhi, whose Congress party suffered a second straight humiliating defeat, was among the crowd with his mother Sonia, the former Congress leader.

Media reports said Gandhi, the son, grandson, and great-grandson of Nehru-Gandhi dynasty prime ministers, has told party leaders he wants to stand down.