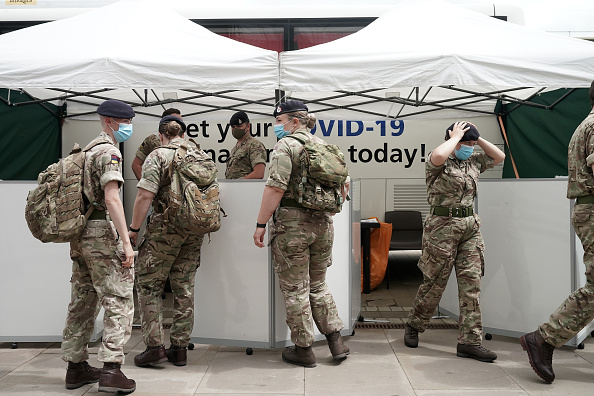 GREATER MANCHESTER and parts of Lancashire will receive extra help to tackle a rise in the delta variant, health secretary Matt Hancock has said, adding that a “strengthened package of support” will be provided to boost Covid vaccination and testing in the area.

Hancock said the package is based on “what’s working in Bolton” which saw its infection rates drop after being offered enhanced support.

“We know that this approach can work, we’ve seen it work in south London and in Bolton in stopping a rise in the number of cases,” he said, calling on residents in the area to “come forward and get the jab as soon as they’re eligible because that is our way out of this pandemic together”.

The package will include military support and supervised in-school testing in the hardest-hit areas. People here are advised to minimise travel in and out of the area and avoid meeting indoors after the areas have been identified as places where the delta variant is spreading the fastest.

Residents are also being encouraged to get tested twice a week and continue to work from home, if possible, as part of the government guidance while schools may also reintroduce face coverings in communal areas if advised to do so by directors of public health.

Mayor of Greater Manchester, Andy Burnham, said people should be cautious and vigilant but should “carry on living their lives”. He has also called on the government to speed up vaccine supplies saying they should be given to the area earlier than planned.

The latest figures show that cases have more than doubled week-on-week in Manchester, Stockport and Trafford, and almost doubled in Tameside and Salford. Eight of the top 20 areas with the highest rates are now in Greater Manchester.

Bolton, which has seen enhanced measures for several weeks now, is the only borough where cases are falling but it still has the highest rate in the region and the second highest in England.

Meanwhile, the country is headed towards ‘Freedom Day’ though speculation is high that the lockdown easing planned to come into effect on June 21 may be pushed back by two weeks to a month. A final decision is expected on Monday (14).