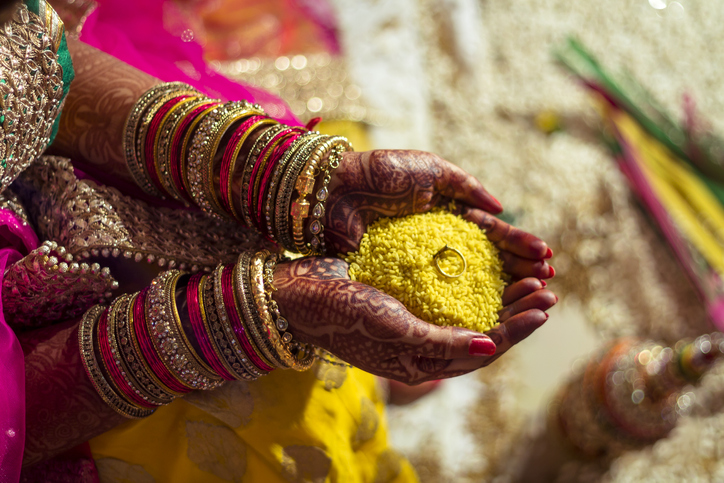 Shot in a Indian wedding

A HINDU female priest living in the US, who offers nuptials and other religious services to LGBTQ people, has described how she is one of a kind and has officiated over a dozen same-sex couple weddings.

Sushma Dwivedi juggles her role as a priest with her other job, as the vice president for communications and brand marketing at Daily Harvest, a subscription-based organic food company.

She told The New York Times she offers “progressive, inclusive, LGBTQ friendly” religious services such as like baby namings, house warmings and business blessings to people who are “straight, gay, having an interracial marriage or who just want a female pundit”.

So far Dwivedi has officiated 33 weddings, nearly half of which have been for same-sex couples.

“It’s close to impossible to find a woman pundit here in the States,” she said. “As far as I know there are less than 10, and none of them cater to the gay and transgender community.”

Dwivedi got herself ordained online by the Universal Life Church in 2013 soon after her marriage when she discovered that her husband’s sibling is trans, and it “became glaringly obvious that if they wanted to get married, there wouldn’t be a pundit who would do it. It’s not culturally accepted yet”, the 40-year-old said in an interview.

“That was heartbreaking. How could I be part of something that would deny love to someone? Two months after my wedding, I got ordained online by the Universal Life Church.”

Hailing from Uttar Pradesh in north India, Dwivedi said she learned the basics from her grandparents and figured out how to customise a Hindu wedding when she herself got married.

In 2016, Dwivedi founded the Purple Pundit Project to help and support the south Asian gay community.

Speaking about her Hindu wedding ceremony, Dwivedi said when compared to a traditional Hindu ceremony that takes two to three hours, hers is just 35 minutes long, during which she makes a couple offer prayers to Lord Ganesh. They then take several laps around a sacred fire; each signifies a commitment they are making.

On her favorite part of the wedding ceremony, Dwivedi said it was when a couple tell her, “This was the wedding we always dreamed of but never thought possible to have.”

The mother of two sons, aged five and three, lives in Harlem with her husband, Vivek Jindal, 37, the chief investment officer of a wealth management platform.