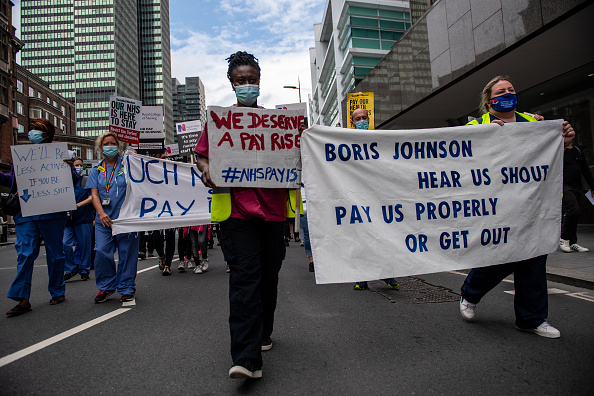 NHS staff take part in a march through central London demanding a pay rise on the 73rd birthday of its founding on July 3, 2021 in London, England. (Photo by Chris J Ratcliffe/Getty Images)

The pay rise, announced on Wednesday (21) evening, is three times higher than the government’s initial one per cent offer, though nurses are likely to reject the award and may take industrial action in protest, the reports said.

The rise was announced by health secretary Sajid Javid, just hours after health minister Helen Whately provoked fury by telling MPs that the final decision on the annual hike had been delayed. Javid claimed that the government had accepted in full the recommendations of the NHS independent pay review bodies.

The rise will cover NHS staff including nurses, paramedics, consultants, dentists and salaried GPs in recognition of “their contribution to battling the coronavirus pandemic”, Javid said in the announcement.

The Department of Health and Social Care said the rise will be worth an additional £1,000 a year to the average nurse in England, while many porters and cleaners will receive around £540.

The British Medical Association (BMA), which represents doctors, said the pay rise was disappointing and that junior doctors and some GPs could miss out on it altogether.

Dr Chaand Nagpaul, of the BMA, said many doctors had not taken annual leave in the past year and now “face a gruelling year ahead with millions of patients on waiting lists, and the country in the midst of another Covid-19 wave”.

Royal College of Nursing (RCN), which had been demanding a 12.5 per cent pay rise, said the pay rise will soon fall behind the expected increase in prices over the coming months, leaving nurses worse-off overall.

RCN interim general secretary and chief executive Pat Cullen warned that nurses in England might go on strike for the first time over the three per cent offer. The RCN’s members in Scotland have already rejected a four per cent offer from the Scottish government.

“The profession will not take this lying down,” Cullen said. “We will be consulting our members on what action they would like to take next.”

GMB, the union for ambulances and other NHS workers, accused the government of “sneaking out” the announcement.

“Hospitals and ambulance services are operating under extreme pressures due to rising demand and staffing shortages,” said national officer Rachel Harrison. “They are being advised to enter the workplace against self-isolation advice and now given this frankly appalling pay offer.”

“This was the opportunity for the government to turn their clapping into genuine recognition. Their response is paltry.”

The fact that the government pay rise offer excludes the NHS’ 61,000 junior doctors – all medics below the level of consultant- is also expected to cause unrest among the medics.

Labour’s shadow health minister Rosena Allin-Khan accused the pay rise as “an insult of the highest order” to health staff.

The pay rise offer comes after the Covid pandemic left hospitals overwhelmed and forced staff to adapt to full personal protective equipment and the cancellation of leave. Waiting lists have risen to a record five million patients, recent reports said.