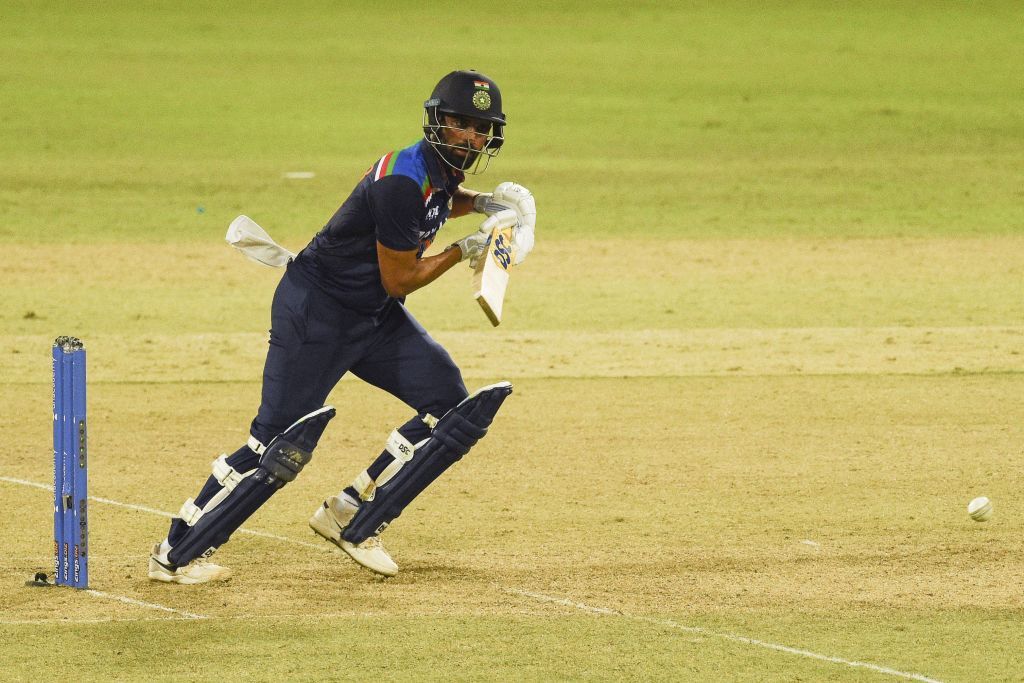 India’s Deepak Chahar plays a shot during the second one-day international cricket match between Sri Lanka and India at the R Premadasa Stadium in Colombo on July 20, 2021. (Photo by ISHARA S. KODIKARA/AFP via Getty Images)

INDIA pacer Deepak Chahar, who starred with the bat in the second ODI against Sri Lanka in Colombo, said he has learnt the art of chasing from Mahendra Singh Dhoni.

Chahar scripted India’s come-from-behind win on Tuesday (20) with an unbeaten 69 at number eight.

“He (Dhoni) has had a very big impact on me. Not just CSK, while growing up, we have all seen how he (takes the match close). Every time we speak, he tells me that it is in your hands to take the game till the end and if you can do that, then you get some overs and that makes the match thrilling.

“So, that was the whole idea – to take the match till the last over,” Chahar said at a virtual press conference on the eve of the third ODI.

Chahar has played under Dhoni at Chennai Super Kings. And he pulled a heist in the second ODI as he led India to a stunning three-wicket win chasing a stiff target of 276 at the R Premadasa Stadium.

According to Chahar, he was currently not looking at the T20 World Cup but stressed that he was happy that he could prove himself with the bat when he got an opportunity

“The (T20) World Cup is still far ahead. My target always is that whenever I get an opportunity with the bat or ball, is to prove myself. Selection is not in my hands nor in any player’s hands, to perform is in our hands.

“I was fortunate enough that I got an opportunity that I could prove in batting. Because for a long time, I was in search of an opportunity, from last two years my batting hasn’t come, or when I batted, I played one or two balls.

“This was a good opportunity for me to prove myself in batting and I am happy that I could convert it,” said the 28-year-old right-arm pacer, who got a congratulatory message from skipper Virat Kohli, who is leading India’s Test side in England.

He also said that coach Rahul Dravid has confidence in him due to the knocks that he has played for India A.

“With Rahul sir, this is my first tour as an India player, but I have done many India A tours with him. And there three or four times, batting came in a similar situation, where the batters got out, and I played good knocks there, so Rahul sir has that confidence in me.

“And that helps and when the coach backs you and has confidence, so when you go to bat, at the back of the mind it is there, that you have support and that makes a huge difference,” elaborated the Rajasthan speedster.

He maintained that he had worked on his batting and that it did not matter to him whether people considered him as an all-rounder or not.

“I have always been working on my batting. My father is my coach and when we speak, the maximum time we speak is about batting in our conversation. And I don’t care whether people consider me an all-rounder or not,” he said.

The pacer also said he had been working on his bowling variations.

“I have been bowling the knuckle-ball for a long time and variation is very important and we work on it daily. When we play with the white-ball, we focus more on variations – be it yorker or slower balls,” he said.