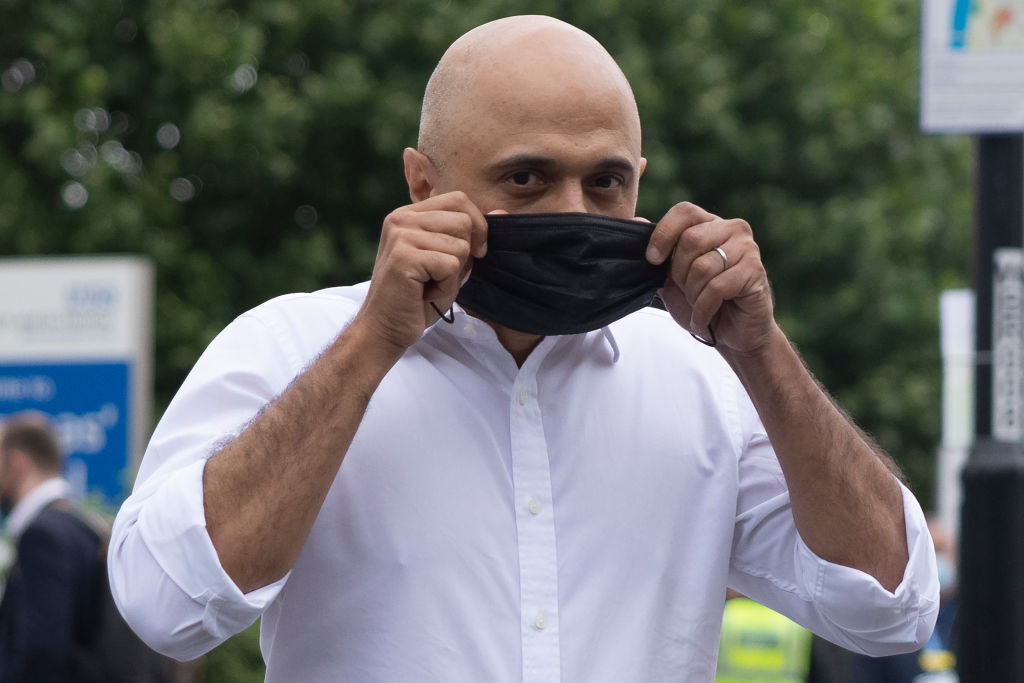 UK Health secretary Sajid Javid puts on a face mask as he leaves St Thomas’ Hospital after a visit on June 28, 2021 in London, England. (Photo by Dan Kitwood/Getty Images)

POLITICAL analysts have detected a dangerous jihadi strain in the Conservative party first detected in Westminster.

Those infected with this deadly mutation say: “We want all Covid restrictions lifted, no matter what the cost. Raising alarms about the 25,000 people a day testing positive for the Delta strain from India is just scaremongering. We demand the right to fly to Spain and have fish and chips with plenty of cheap booze – as guaranteed in the Magna Carta. Forcing us to wear masks is a curtailment of our civil liberties. Lots of old people die from flu in the winter so what’s the difference?”

British Asians have been told by scientists: “I am afraid we have to learn to live with the J mutation in the Conservative party.”

The health secretary, Sajid Javid, who appears to be playing a long game, seems a little too anxious to ingratiate himself with the jihadi wing of the Tory party. He wants to make a mark by drawing attention to his biggest plus point – he is not Matt Hancock.

Unlike the former health secretary, Javid – who prefers to be called “Our Saj” – wants the swift removal of all restrictions in an effort to please right-wing commentators.

Javid set out his priorities in a Sunday newspaper: “The first is how we restore our freedoms and learn to live with Covid-19. We are on track for July 19 and we have to be honest with people about the fact that we cannot eliminate Covid. We also need to be clear that cases are going to rise significantly… But no date we choose will ever come without risk, so we have to take a broad and balanced view.”

Meanwhile, the government’s message on masks is very confusing. Last year it began by saying there was no data to show it was a good idea, before making it compulsory in shops and on public transport. And now it is declaring the choice is up to the individual’s good sense. We all noticed those infected with the J mutation were not wearing masks even when it was compulsory.

The housing secretary Robert Jenrick reflected the government’s latest line on masks last weekend: “We will be moving into a phase where these will be matters of personal choice. So some members of society will want to do so for perfectly legitimate reasons, but it will be a different period where we as private citizens make these judgements rather than the government telling you what to do.”

Jenrick added: “We are now going to move into a period where there won’t be legal restrictions –the state won’t be telling you what to do – but you will want to exercise a degree of personal responsibility and judgement.”

He stressed: “We are not going to put the Covid-19 virus behind us forever. We are going to have to learn to live with it.”

To be sure, the economy needs to be revived but as Professor Sir Venkatraman Ramakrishnan, the former president of the Royal Society, previously told me, wearing a mask should become like putting on a seat belt in a car. He does not think there is a conflict between life and livelihood.

When it comes to masks and other precautions, British Asians would do better to follow Dr Chaand Nagpaul, the chairman of the British Medical Association (BMA), who said the easing of restrictions was not a binary “all or nothing” decision and that “sensible, cautious measures” were still required.

“As case numbers continue to rise at an alarming rate due to the rapid transmission of the Delta variant and an increase in people mixing with one another, it makes no sense to remove restrictions in their entirety in just over two weeks’ time,” he explained.

The BMA is urging the government to improve public messaging on how the virus spreads and the importance of good ventilation –including the setting of legal standards. It recommends “targeted measures” requiring people to continue wearing face coverings in enclosed public spaces, such as shops and on public transport.

Nagpaul warned ministers not to throw away the progress made in the vaccination programme. He said more time was needed to roll out jabs, stressing the country was “still some way from protecting enough of the population”.

Twice as many coronavirus patients were on ventilators now compared with this time last month, he said, presenting a particular worry for doctors. High levels of community transmission could also provide fertile ground for new, potentially vaccine-resistant variants to develop, he added.

Nagpaul, who has always struck me as being a calm, rational man, said: “The promise was to make decisions based on data and not dates, and while we were pleased to see the government react to data in delaying the easing on June 21 last month, ministers must not now simply disregard the most recent, damning numbers by rushing into meeting their new July 19 deadline.”

Our Saj should be aware that if there is a fourth lockdown in the winter, the Tory Jihadis, who are applauding him now, will just as quickly stick the knife into him.

How Modi won in Batley

NARENDRA MODI won the recent Batley and Spen byelection, even though the Indian prime minister wasn’t technically a candidate.

The Labour leader, Sir Keir Starmer, resisted calls from some of his own MPs to withdraw the leaflet and not engage in “dog-whistle racism”.

Leadbeater also defended the leaflet: “I don’t think it is a mistake. I think that leaflet is about human rights and it’s about having an MP who is going to speak out on the human rights issues in Kashmir.

“And, sadly, we’ve got a prime minister who isn’t doing that, he isn’t challenging the Indian government around these issues. So you need someone who can, and that’s exactly what I would do.”

The real winner is Modi, because the leaflet has ensured even more Indians will vote next time for Boris Johnson, who steers clear of importing India-Pakistan differences over Kashmir into British domestic politics.

Reflecting the common sense view, Tory peer Dr Rami Ranger told me: “I was appalled by the way Labour used Narendra Modi’s picture in their election campaign in Batley & Spen. I fail to understand what connection the Indian prime minister has with British politics. It was politics designed to divide British citizens of Indian and Pakistani origin.

“But dividing voters on a racial and religious basis is very dangerous for race relations and social cohesion in Britain – a short-term gain for a political party but a long-term loss for the nation.

“I would like the Election Commissioner to look into the conduct of the Labour party.”

Leadbeater is playing to her Pakistani constituents, who should not be gullible enough to believe that Labour will make the slightest difference in India-Pakistani relations.

My own view is a very simple one – Indians and Pakistanis in Britain should be very good friends, agree to disagree on Kashmir in a cordial spirit and work together in order to improve the lives of British Asians in this country.

DILYN is no longer top dog in Downing Street. The chancellor Rishi Sunak posted a photograph of himself with a new puppy, Nova, a Labrador retriever, which his daughters, Krishna and Anoushka, had wanted. This is a development even more significant than Shannon Singh’s first-round exit from Love Island.

She apparently refused to kiss the boys. At this rate she won’t make a special adviser.