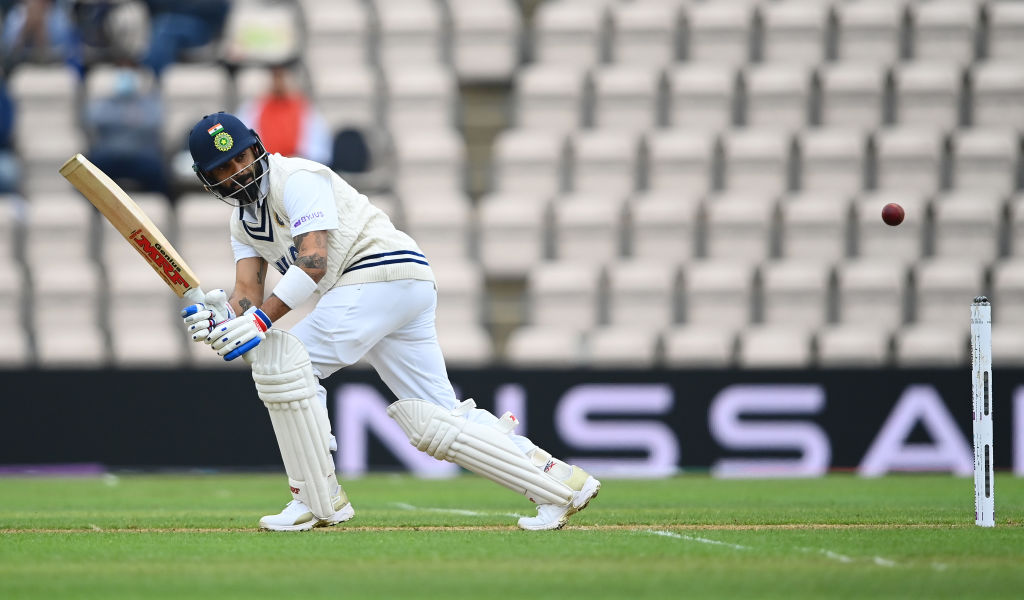 Virat Kohli of India hits runs during Day 2 of the ICC World Test Championship Final between India and New Zealand at The Hampshire Bowl on June 19, 2021 in Southampton, England. (Photo by Alex Davidson/Getty Images)

Kohli was 44 not out, with the star batsman having hit just one boundary in 124 balls faced.

After Friday’s first day was washed out without a ball bowled, India were 146-3 when the third of the day’s stoppages for bad light led to an early close even though the floodlights were on full beam.

Kohli had raised 58 runs with Ajinkya Rahane as only 9.1 overs played in the final session.

Rahane, batting on 29, looked cagey initially but gamely hung on to feature in India’s second 50-plus partnership.

New Zealand skipper Kane Williamson elected to field after winning the toss. Under an overcast sky, India scored 69 runs but lost both their set openers in an evenly balanced morning session.

Rohit Sharma and Shubman Gill raised 62 runs for the opening partnership before Kyle Jamieson separated them with a delivery that swung late.

Rohit, having made a fluent 34, left his bat hanging and Tim Southee dived to his right to pouch the outside edge at third slip.

Neil Wagner was introduced late in the session and the left-arm quick struck with his third delivery, dismissing Gill caught behind for 28.

Cheteshwar Pujara took 36 balls to get off the mark and, like Gill earlier in the match, was smacked on the helmet grill by a rising delivery which sent his neck guard flying.

Pujara made eight before Boult swung one back in to trap him lbw.

Kohli and Rahane did not allow their concentration to lapse despite interruptions because of bad light, which also forced an early tea break.

Both teams stuck to their strengths with India picking both their spinners — Ravichandran Ashwin and Ravindra Jadeja — and New Zealand opting for an all-seam attack.

Only 64.4 overs have been played in the first two days of the weather-hit contest which has a reserve day to make up for the lost time.

The one-off match marks the culmination of a two-year cycle of the inaugural WTC,

This match, launched in 2019 to create a pinnacle event for test cricket, is the culmination of two years of series between the leading Test nations. The prize money is worth $1.6 million to the winners and $800,000 to the runners-up.

The India team wore black armbands on Saturday as a mark of respect for Milkha Singh following the national track athletics legend’s death from Covid-19 at the age of 91.