He bowed before the Guru Granth Sahib, the holy book of the Sikhs, and sat cross-legged on the floor while donning an orange scarf over his suit. 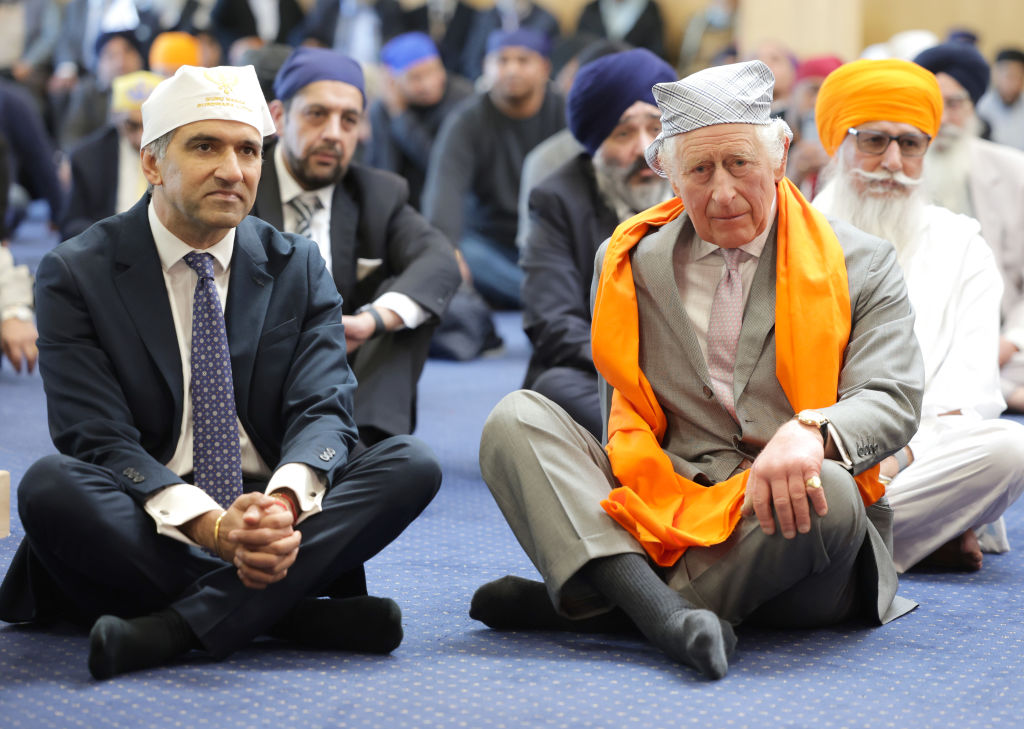 King Charles III sits on the floor in the Prayer Hall with Professor Gurch Randhawa, a member of the Sikh Congregation, during a visit to the newly built Guru Nanak Gurdwara on December 06, 2022 in Luton, England. (Photo by Chris Jackson/Getty Images)
Follow Us

King Charles covered his head with a traditional Ramaal headscarf as a gesture of humility and respect when he visited the newly-built Gurdwara in Luton on Tuesday (6).

He also made the traditional namaste gesture as he spoke to volunteers, and a traditional shawl for meditation was placed around his shoulders in the prayer hall, reported the MailOnline.

Professor Gurch Randhawa, deputy lieutenant, and director of the Institute for Health Research at the University of Bedfordshire welcomed the King. He is also a member of the Sikh Congregation at the Gurdwara.

Before being asked to unveil a plaque to commemorate the Gurdwara’s formal opening, he bowed before the Guru Granth Sahib, the holy book of the Sikhs, and sat cross-legged on the floor while donning an orange scarf over his suit.

King Charles also had the opportunity to speak with volunteers at the Luton Sikh Soup Kitchen Stand about the effects that food insecurity is having on the neighbourhood.

He also spoke with pupils studying Punjabi and traditional music, as well as the volunteers who run the Sikh School.

Local children had the opportunity to speak with the King as he met with volunteers who run the school.

Kuldeep Singh Basra, a trustee of the Gurdwara, termed the King’s visit as an achievement for the Sikh community in Luton.

Earlier, Charles met the Lord Lieutenant of Bedfordshire, Susan Lousada, and the mayor of Luton, Councillor Sameera Saleem at the town hall before meeting local groups and members of the public.

Meanwhile, a man was arrested on suspicion of common assault after an egg was believed to have been thrown in the direction of King Charles during a walkabout.

The alleged assault took place while Charles, 74, who came to the throne in September after the death of his mother Queen Elizabeth, visited Luton.

A police spokesperson confirmed a man in his 20s had been had been arrested in Luton’s St George’s Square and was in custody for questioning.