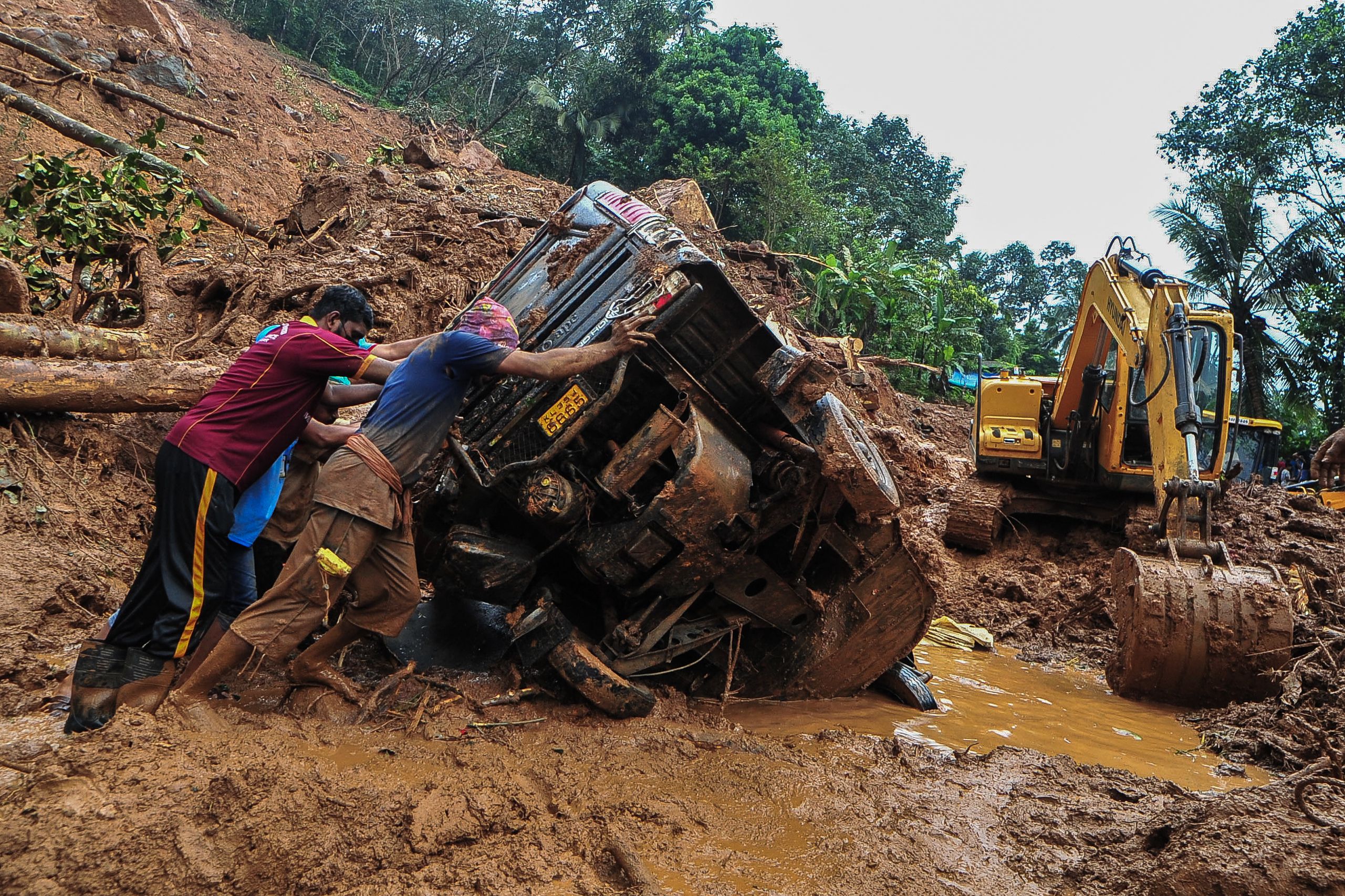 Rescue workers push a overturned vehicle stuck in the mud and debris at a site of a landslide claimed to be caused by heavy rains in Kokkayar in India’s Kerala state on October 17, 2021. (Photo by -/AFP via Getty Images)

THE India Meteorological Department (IMD) on Tuesday (19) sounded an orange alert for Thiruvananthapuram, Pathanamthitta, Kottayam, and other districts for Wednesday (20) in rain-battered Kerala.

Other districts that have been issued with an orange alert include Ernakulam, Idukki, Thrissur, Palakkad, Malappuram, Kozhikode, Wayanad and Kannur districts. A yellow alert has been sounded in Kasargod, Alapuzha and Kollam districts.

The weather forecasting agency also predicted heavy rains in the state this week.

Meanwhile, dam authorities in Kerala are taking cognizance of the situation arising out of the torrential rainfall. Shutters of several dams have been opened to prevent them from overflowing.

Flooding and landslides caused by heavy rains have killed at least 27 people across the state. The state has been witnessing incessant rainfall over the past few days.

An Indian couple sailed across submerged streets in a massive cooking pot to reach their wedding venue on Monday (18).

The couple borrowed the pot from a local temple and enlisted two men to push the makeshift boat, images that have gone viral on social media showed.

“It has turned into a wedding which we never imagined,” the bride told local media channel.

Images showed cars and buses submerged by the floodwaters. Rescuers searched for survivors on Monday as the army, navy and air force assisted with relief and rescue operations.

The state government said it has evacuated thousands of people and set up over 100 relief camps.

Residents were cut off in parts of the state as the rains, which started to intensify from late Friday (15), swelled rivers and flooded roads.

Some 11 bodies were found in the Idukki district and another 14 in Kottayam district, officials said, after the areas were hit by landslides and flash floods.

“It was my livelihood. Everything is gone,” a distraught man told Kerala news channel Manorama TV in Koottickal town in Kottayam, which was hit by a landslide.

“The hill broke off near us. There has been a lot of damage and loss. The house has gone. Children have gone,” a woman from Koottickal added.

Prime minister Narendra Modi tweeted his condolences and said authorities were working to help those who were affected or hit by the deluge.

In northern India, some states including the Himalayan regions of Uttarakhand and Himachal Pradesh are forecast to experience “heavy to very heavy rainfall” in the next two to three days, the weather bureau said last Sunday (17).

The northern weather system would be caused by a low-pressure area over Afghanistan and its surroundings interacting with strong winds from the Bay of Bengal, it added.