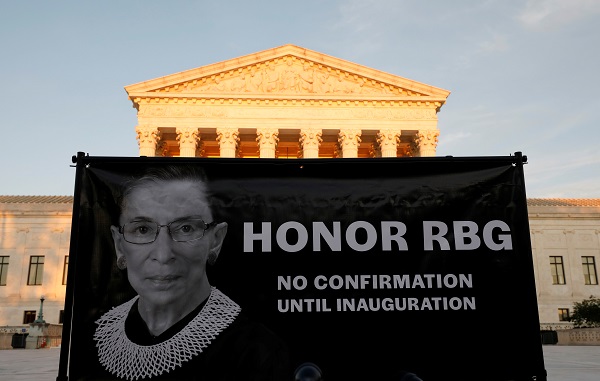 A banner with an image of the late US Supreme Court Justice Ruth Bader Ginsburg and a message referring to the selection of her successor is displayed outside the US Supreme Court in Washington, September 19, 2020 (REUTERS/Yuri Gripas).

HOW many judges have their names on mugs and T-shirts or are known by the nickname at­tributed to a rap star, the Notorious RBG?

Ruth Bader Ginsburg was and always will be an inspiration to lawyers and judges worldwide; she is as no other. From her earliest years she stood up for gender equality, despite suffering discrimination at many stages.

Many of her cases gathered considerable atten­tion, particularly her dissenting opinion in the case of Bush v Gore, which effectively decided the 2000 US presidential election between the parties. Ob­jecting to the court’s majority opinion favouring Bush, Ginsberg dissented.

She also authored some 200 opinions and broke new ground for gender equality in the US, despite having been warned early on not to pursue a career hinged on fighting discrimination against women.

She succeeded in using a decision hinging on the 14th Amendment’s Equal Protection Clause, which provides that people shall be equally protected by US laws. She argued the first case in which the Su­preme Court upheld the application of the clause to strike down an Idaho statute which discriminated against the mother of a minor as against a father.

Cases following that also related to discrimina­tion against men. In the case of Fronterio v Rich­ardson in 1973, she argued: “Why did the frames of the 14th Amendment regard racial (discrimination) as odious? Because a person’s skin color bears no necessary relationship to ability. Similarly, a person’s sex bears no necessary relationship to ability.”

She ensured that women were treated equally in terms of undertaking jury duty, and her judge­ments in relation to equal pay also were of great importance, as were those in regard to a woman’s right to choose when it came to abortion. She was a trailblazer at every stage of her career, she broke barriers for others to follow, yet at the same time being an inspiring and caring mentor to those with whom she worked and her law clerks.

Appointments to the US Supreme Court are po­litical and for life. She was steadfast in her opinions as the political situation changed and she stood as a beacon of liberalism, always remaining dedicated to the issues that she was concerned with, while being restrained and measured.

Her loss will have huge implications for the US and the implications to civil rights are great. When US president Donald Trump ran for office, she de­scribed him as a ‘faker’ although she later apolo­gised for expressing herself in that way. He paid a short tribute to her last week.

As for the women judges of today and tomorrow, the world has changed, and we have laws in place in the UK to ensure that women are treated equally. But it is up to us as judges to ensure that those laws are upheld and interpreted in a way that reduces or eliminates discrimination of any kind. That takes courage. There is still much more to do, and the loss of Justice Ginsberg to the US and the retire­ment of Baroness Hale in the UK has resulted in a gaping hole for feminist lawyers. It is not easy to see who could fill their shoes.

All we can do as individual judges, in our own humble ways, is to stand up for what we believe in, as she did, apply the relevant statutes in a way that ensures fair treatment, and to risk unpopularity or worse by expressing dissent and disagreement when necessary, whatever is expected of us by the executive or those who support a particular policy or party line. Quoting Sarah Grimke, a 19th-century women’s rights advocate, Justice Ginsberg said in a case in 1973 that she argued before the Supreme Court as an advocate: “I ask no favour for my sex, all I ask is that they take their feet off our necks.”

She repeated that quotation in a documentary made about her before her death.

The tribute paid to her by the International As­sociation of Women Judges (IAWJ) is worth repeat­ing. “IAWJ judges the world over mourn the death of our longstanding member, constant friend and inspiring mentor Justice Ruth Bader Ginsburg. We honor her achievements and her unceasing efforts to achieve recognition in law of individual human beings without preconceptions or stereotypes and to make equality for all a reality. She was a true pio­neer woman judge and champion for women’s rights and gender equality. We treasure her legacy and her powerful example of judicial leadership. May she rest in well-earned peace, secure that she will always live within us.”