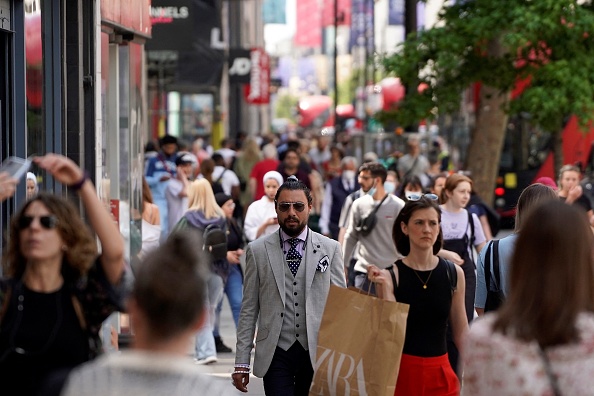 Pedestrians, some wearing face coverings due to Covid-19, walk past shops on Oxford Street in central London on June 7, 2021. (Photo by Niklas HALLE’N / AFP) (Photo by NIKLAS HALLE’N/AFP via Getty Images)

BRITAIN may see “mix-and-match” unlocking on June 21, with some measures like work from home and mask guidance likely to remain in place, as numbers of daily infections continue to rise in the country.

“A mix-and-match approach is probably on the cards, given the limited number of levers left,” a government source told The Times after prime minister Boris Johnson raised concern over the rising number of cases and hospitalisations.

“What everybody can see very clearly is that cases are going up and, in some places, hospitalisations are going up,” Johnson said on Wednesday (9).

“What we need to assess is the extent to which the vaccine rollout, which has been phenomenal, has built up enough protection in the population in order for us to go ahead to the next stage.”

Previously, the prime minister had repeatedly said he had seen nothing in the data to justify a delay. The official update from the government is expected on Monday (14).

Key ministers and officials will reportedly discuss a range of options on Sunday (13), when Johnson on the sidelines will be hosting the G7, including a two-to-four-week delay and the possibility of a watered-down reopening that keeps some rules in place.

The tweaked rules of reopening are expected to include lifting the current 30-person limit on weddings and receptions and allowing far greater crowds to attend ceremonies, bringing it in line with the government’s policy on funerals.

Bar mitzvahs and christenings are also set to be boosted under the proposals. While socially distanced tables may not be required, guests will still be urged to be cautious about contact with other households, as per a media report.

Top SAGE adviser professor Neil Ferguson warned that it will take up to another three weeks for scientists to get enough data to accurately work out how dangerous the delta variant (first reported in India) is and how bad the third wave will be.

The warning of the third wave comes on Wednesday (9), when the country reported 7,540 new cases in the biggest week-on-week spike since February, with the delta variant suspected for spiralling the numbers.