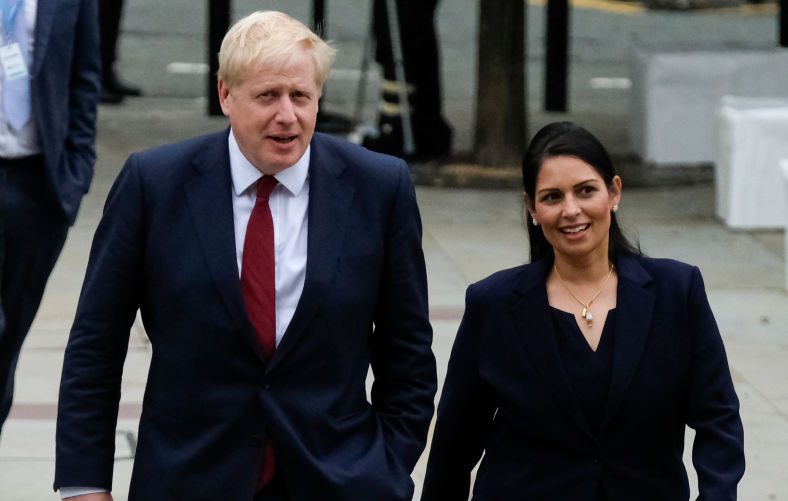 PRIME MINISTER Boris Johnson is alleged to have lashed out at home secretary Priti Patel over the soaring numbers of boats crossing the Channel, a media report claimed on Friday (11).

Patel has also been facing the fury of some MPs over the use of Napier Barracks during the pandemic, with many of them calling for her resignation.

As more than 1,700 migrants reached Britain in the past fortnight, taking this year’s total up to 5,000, the prime minister is said to be becoming “increasingly frustrated at the images of boats arriving day after day”, according to The Times.

“What the f*** is Home Office doing? When is she [Patel] going to sort this out?” a source described Johnson as saying, adding that the remarks were not representative of his views on Patel and the two “work closely together on this issue”.

Defending Patel, a Home Office source said that she is the only home secretary since 2010 who is “tackling this issue head-on”.

There are also calls for the home secretary’s resignation after documents suggested she misled parliament over her decision to house asylum seekers at Kent’s controversial Napier Barracks.

In the House of Commons on Thursday (10), the Scottish National Party’s Joanna Cherry said Patel’s comments about the former army barracks back in February were “simply not factually correct”.

Cherry added, “So why isn’t the Home Secretary tendering her resignation as Amber Rudd had the grace and decency to do?”

Public Health England (PHE) had previously advised against housing asylum seekers in dormitories before the Home Office proceeded with the site in September 2020. At a hearing in February this year, Patel told MPs that the Home Office had followed the PHE advice throughout.

Despite the PHE guidelines and concerns raised in the House of Commons, the Home Office continued to use Napier Barracks’ dormitories which also saw a significant outbreak of Covid-19 contracting 200 people, almost half the residents.

The Home Office said additional accommodation at the barracks was required at extremely short notice during the height of the pandemic and “we make no apology for providing people a secure place to stay”.

“At all times during the pandemic, we believed we took reasonable steps to give effect to the advice from the health authorities. Significant improvements have been made to the site, including improved accommodation and more outdoor and recreational activities,” said a Home Office statement.