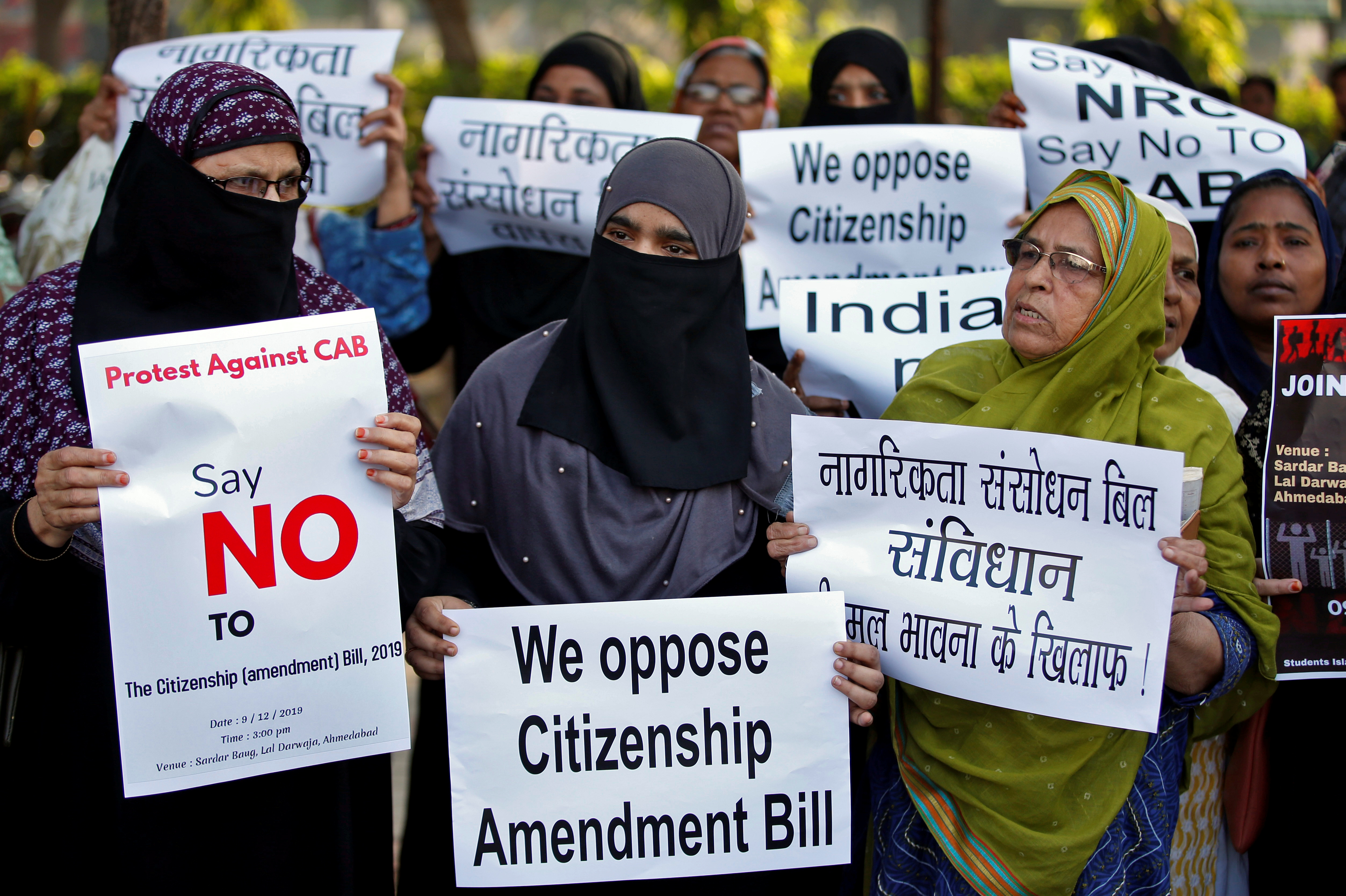 Demonstrators display placards during a protest against the Citizenship Amendment Bill, a bill that seeks to give citizenship to religious minorities persecuted in neighbouring Muslim countries, in Ahmedabad, India, December 9, 2019. REUTERS/Amit Dave
Follow Us

India’s lower house passed controversial legislation early Tuesday (9) that will grant citizenship to religious minorities from neighbouring countries, but not Muslims, amid raucous scenes in parliament and protests in the country’s northeast.

It comfortably passed the lower house with 311 votes in favour and 80 against just after midnight.

“This bill is in line with India’s centuries old ethos of assimilation and belief in humanitarian values,” prime minister Narendra Modi tweeted, adding that he was “delighted” about its passage.

But to Muslim organisations, rights groups and others, the bill is part of Modi’s push to marginalise India’s 200-million-strong Islamic minority — a claim he and his government deny.

“This is not a bill that is discriminatory,” home minister Amit Shah said. “This is a bill to give rights, not to take them away from anybody.”

Modi’s government had tried to shepherd the legislation through parliament during its first term in power, but it failed in the upper house, where Modi’s Bharatiya Janata Party (BJP) and its allies lack a majority.

After sweeping to victory in the April-May national elections, the BJP is now more confident it can push the bill through both chambers.

During a lengthy debate marked by angry exchanges, opposition Congress lawmaker Shashi Tharoor said the bill “infringes upon the principle of equality before law” guaranteed to all persons, including non-citizens.

The legislation seeks to amend the Citizenship Act of 1955, which prohibits illegal migrants from applying for Indian citizenship.

Under Modi, several cities perceived to have Islamic-sounding names have been renamed, while some school textbooks have been altered to downplay Muslims’ contributions to India.

In August, his administration rescinded the partial autonomy of Jammu and Kashmir, India’s only Muslim-majority state, and split it into two.

On Monday, 100 scientists and scholars at institutions in India and abroad published a joint letter expressing their “dismay” at the legislation, saying the constitution called for members of all faiths to be treated equally.

But, they wrote, Modi’s “proposed bill would mark a radical break with this history and would be inconsistent with the basic structure of the constitution”.

The letter said such a careful exclusion of Muslims would “greatly strain” India’s pluralism.

The government has defended the bill, saying it was only aimed at flushing out infiltrators, and that Muslims did not face persecution in the three neighbouring countries.

“What are we doing now? We are giving the minority their rights.”

Shah has recently also proposed a “national register of citizens” that would see “each and every infiltrator identified and expelled” from India by 2024.

The citizenship bill has led to protests in India’s northeastern states, where residents are unhappy about an influx of Hindus from neighbouring Bangladesh.

On Monday, prominent political groups opposing the bill called for a complete shutdown across all the states in the northeast on Tuesday.