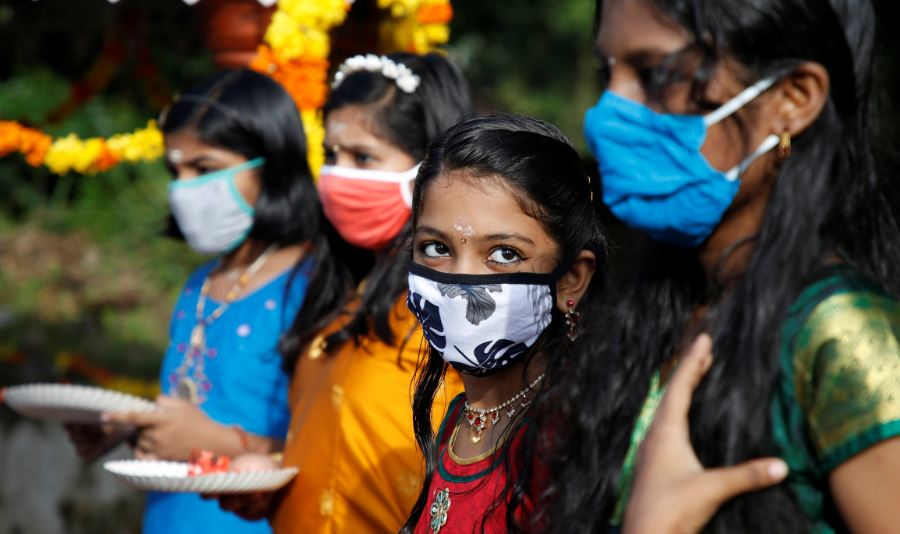 Girls wearing protective face masks wait to pray inside temple premises on the occasion of the annual harvest festival of Onam, amidst the spread of the coronavirus disease (COVID-19), on the outskirts of Kochi, India, August 31, 2020. REUTERS/Sivaram
Follow Us

INDIA reported 78,512 novel coronavirus infections on Monday (31), more than any other country but fewer than the previous day when it posted the world’s biggest, single-day tally, as authorities looked to open more sectors of the economy.

The world’s second-most populous country has been posting the highest single-day caseload in the world since Aug. 7. At 3.62 million cases, India is fast catching up to the US and Brazil in terms of total cases but it has a lower death rate.

India’s coronavirus deaths went up by 971 in the past 24 hours, taking the tally to 64,469, the health ministry said.

The huge numbers have got authorities worried, especially with people in rural areas largely abandoning rules aimed at stopping the spread, officials say.

Kumar Sanjay Krishna, the chief secretary of Assam, one of the worst-hit states, attributed the increasing cases to more testing, the opening of the economy and complacency.

“People are not following precautionary steps and are violating the Covid protocols,” he said on Twitter.

“From Monday onwards there shall be visible strict action taken against those who violate the norms of social distancing or found not wearing a face mask.”

But at the same time, fears are growing for the world’s fifth-largest economy, with a contraction in gross domestic product for the June quarter expected to be announced later on Monday.

Hoping to avert more serious economic damage, the government is relaxing restrictions and has announced that urban metro trains can resume services from Sept. 7.

Also, up to 100 people will be allowed to congregate for events including religious and political functions later in September.

The government is also allowing states to let some school staff report to duty and has resisted pressure to delay exams slated to start Tuesday, with more than 2 million students aiming for admission to medical and engineering schools.

Interior minister Amit Shah, who had been admitted to hospital twice after contracting the virus, was discharged on Monday. Many senior politicians have been infected.