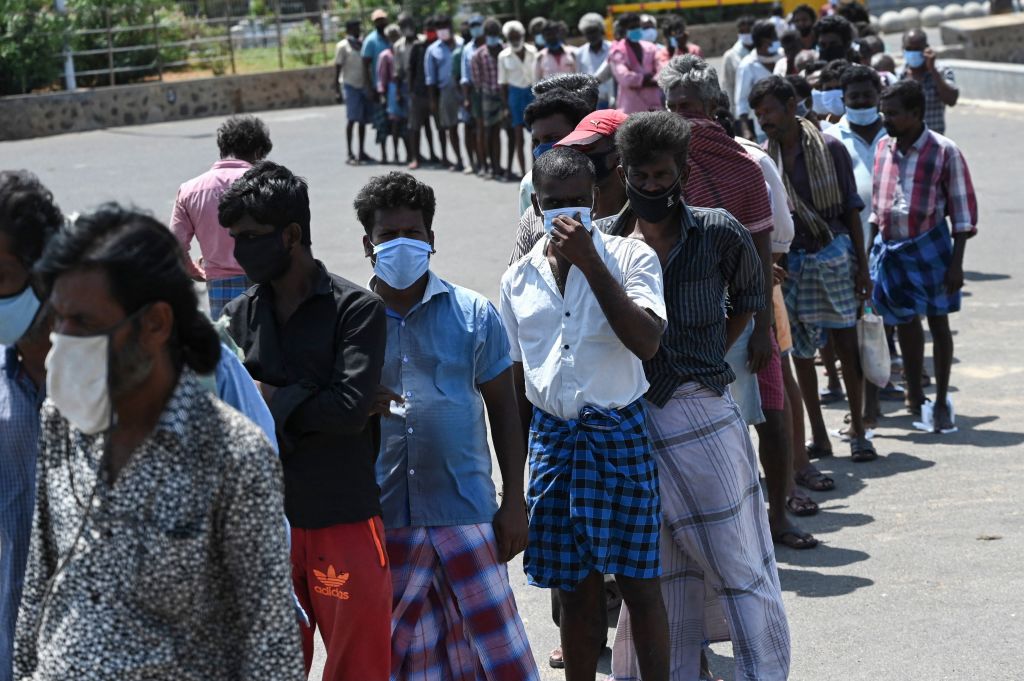 People in need wait in line for food distributed by volunteers of a non-governmental organisation during a lockdown imposed in Tamil Nadu state to contain the Spread of Covid-19 coronavirus in Chennai on June 4, 2021. (Photo by ARUN SANKAR/AFP via Getty Images)

SOME of India’s states are easing lockdown restrictions as coronavirus infections subside, with the world’s second most-populous nation on Saturday (5) logging its lowest daily case count in nearly two months.

The national capital territory of Delhi, the seat of India’s federal government, was among those relaxing restrictions and will allow shops to open on alternate days. Shops with even numbers will open on one day while those with odd numbers will open the next day. Private offices will also now be allowed to operate at 50 per cent of normal staffing levels.

“The coronavirus situation in Delhi is slowly getting better,” chief minister Arvind Kejriwal said in an online news conference as he announced that the state will build oxygen storage capacity of 420 tonnes.

Hospitals in Delhi had struggled to provide oxygen cylinders and beds to patients as infections surged but that wave began subsiding from the middle of last month.

Kejriwal said the state would in future be prepared to deal with 37,000 new cases a day. Its peak thus far was 28,395 new infections on April 20.

In northern Uttar Pradesh, the country’s most populous state, only night curfew restrictions remain for 55 of its 75 districts.

“Districts which have positive cases under 600 have been given permission to open but with restrictions, while cities with over 600 positive cases will be under lockdown till the next order,” a local government spokesperson said.

In the industrialised western state of Maharashtra, the local government will from June 7 allow malls, movie theatres, restaurants and offices to open regularly in districts where the positivity rate has fallen below five per cent.

In prime minister Narendra Modi’s home state of Gujarat, also in the west, all government and private offices will be allowed to operate fully staffed from June 7, instead of the current restriction of 50 per cent.

The Gujarat government has also eased restrictions on commercial activities, allowing shops in 36 cities to remain open for longer.

In eastern Odisha state, lockdowns have been eased in three districts thanks to a decline in coronavirus cases while the southern state of Tamil Nadu now allows grocery retailers to open for most of the day and has permitted offices to operate with 30 per cent capacity.