Indian farmers step up protests after eight killed in clashes 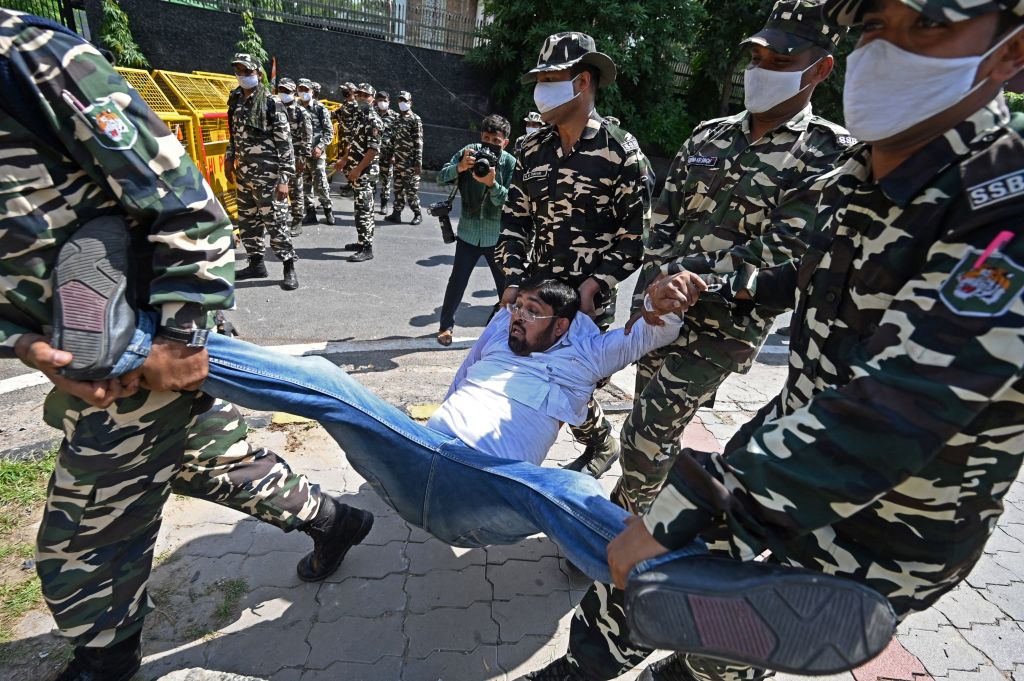 An activist of India’s Youth Congress shouts slogans after being detained by police during a demonstration in New Delhi on October 4, 2021 (Photo by MONEY SHARMA/AFP via Getty Images)

FARMERS in India have vowed to intensify their months-long protest against laws aimed at liberalising agriculture as tension flared a day after eight people were killed in clashes between growers and ruling party supporters.

Four of the eight were killed when a car linked to a senior ruling party official crashed into protesters in Uttar Pradesh state, protest leaders said.

The farmers had gathered for a demonstration in Uttar Pradesh state’s Lakhimpur Kheri district, about 130 km (81 miles) north of the state’s capital Lucknow, where the junior home affairs minister Ajay Mishra and the state’s deputy chief minister Keshav Prasad Maurya had been due to visit.

Police said they were investigating the crash and had registered a case against 13 people including Mishra’s son.

An alliance of protest groups called in a petition to India’s president Ram Nath Kovind on Monday (4) for a court-supervised investigation of the violence.

“We’ll intensify our agitation in Uttar Pradesh and other parts of the country to highlight the plight of innocent farmers,” said Dharmendra Malik, a senior leader of the Bharatiya Kisan Union.

“The government might try to discredit the 10-month-long movement, but we will remain peaceful in our struggle,” Malik said.

“Before jumping to any conclusions, please wait for the ongoing investigation and the action thereafter,” he tweeted late Sunday in Hindi.

According to sources, the 49-year-old leader, who is expected to play a major role in the Congress’s campaign in next year’s state election in UP, will be presented before the district magistrate. Her office, however, said that no information on the same was provided by the district administration.

Angry protesters set fire to several cars and at least five more people, four of them supporters of the ruling Bharatiya Janata Party (BJP), were killed.

On Monday, the protesters kept the bodies of the four dead farmers in glass cases for display around the protest site.

Police banned gatherings, cut off mobile internet services, sent extra forces and detained several opposition figures on their way to the scene including Priyanka Gandhi from the Congress party.

Dozens of opposition supporters staged a protest in the city and set fire to at least one police vehicle, television pictures showed.

Agriculture has long been a political minefield and employs some two-thirds of India’s 1.3 billion population.

The legislation the farmers object to, introduced in September last year, deregulates the sector, allowing farmers to sell produce to buyers beyond government-regulated wholesale markets, where growers are assured of a minimum price.

Small farmers say the changes make them vulnerable to competition from big business, and that they could eventually lose price supports for staples such as wheat and rice.

The government says reform of the sector, which accounts for about 15 per cent of the $2.7 trillion economy, mean new opportunities and better prices for farmers.

Farmers said the car that crashed into the protesters was owned by a son of junior home minister Mishra.

Mishra said his son was not present at the incident, but added that a car driven by “our driver” lost control and hit the farmers after they threw stones at the car and attacked it with sticks and sword.

The son, Ashish Mishra, also denied being present. Police in Uttar Pradesh, which is ruled by prime minister Narendra Modi’s party, said the son was one of the 13 people against whom a case had been registered.