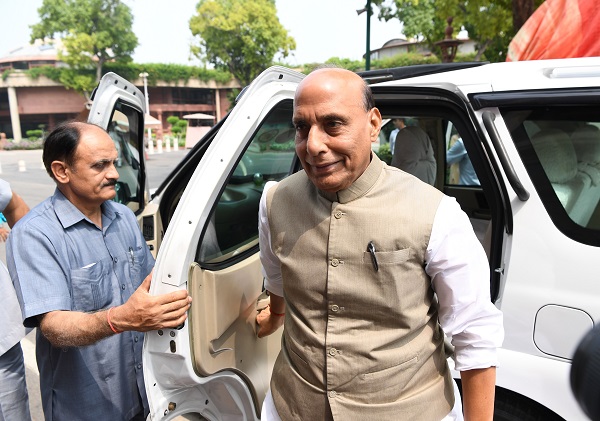 INDIA’S national security challenges are increasing and becoming “complex” in view of the changing geopolitical situation across the globe, the country’s defence minister Rajnath Singh on Thursday (19) said and pitched for a strong, capable and completely “self-reliant” domestic defence industry.

Singh said this amid growing concerns in India and elsewhere over the Taliban recapturing power in Afghanistan just a few days ago following the collapse of the US-backed government.

“Today, the security scenario in the whole world is changing very fast. Because of this, the challenges to our national security are increasing and becoming complex. There are constant changes in the global geopolitical situation,” the Bharatiya Janata Party (BJP) leader said, without making specific references.

Singh said this after launching the ‘Defence India Startup Challenge 5.0’, an initiative under the Innovations for Defence Excellence (iDEX), which is an umbrella organisation to promote development of technology for the defence sector.

He said considering the fast-changing security challenges, India must focus on having a strong, capable, and ‘self-reliant’ defence industry to meet the needs of the armed forces.

“It is necessary that we not only create strong, modern and well-equipped forces, but also develop our defense industry, which is equally strong, capable, and most importantly, completely ‘self-reliant’,” he said.

The defence minister also called upon the private sector to contribute in strengthening the defence-manufacturing sector.

“While assuring all possible cooperation from the government, I call upon the private sector to come forward and contribute in building a strong and self-reliant defence sector,” he said.

“There is neither a shortage of talents in our country, nor is there a lack of demand for talents. But in the absence of a common platform, the two could not match. ‘iDEX’ platform has been successful to a large extent in bridging this gap,” he said.

In the last couple of years, the Indian government has unveiled a series of reform measures and initiatives to make the country a defence-manufacturing hub.
In August last year, Singh said that India will stop importing 101 weapons and military platforms like transport aircraft, light-combat helicopters, conventional submarines, cruise missiles and sonar systems by 2024.

In May 2020, the Narendra Modi government announced raising the FDI (foreign direct investment) limit from 49 per cent to 74 per cent under the automatic route in the defence sector.

The government has been focusing on reducing dependence on imported military platforms and has decided to support domestic-defence manufacturing.

The Indian defence ministry has set a goal of a turnover of $25 billion (Rs 1.75 lakh crore) in defence manufacturing by 2025 that included an export target of $5 billion (Rs 35,000 crore) worth of military hardware.