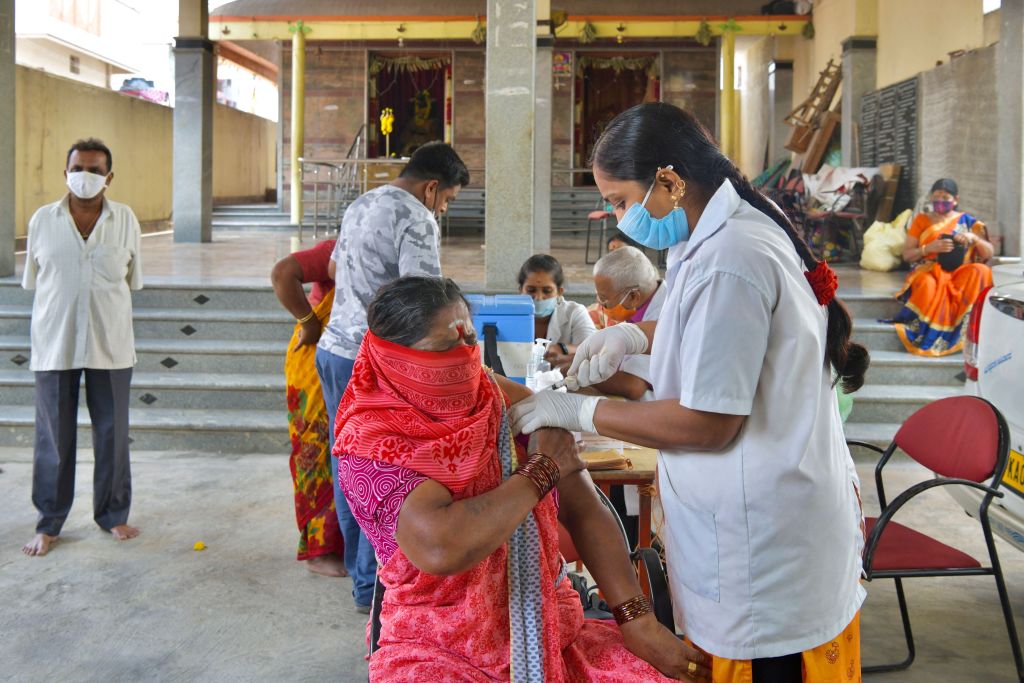 A woman gets inoculated with a dose of the Covishield shot, at a vaccination camp held inside a temple in Bengaluru. (Photo by MANJUNATH KIRAN/AFP via Getty Images)
Follow Us

INDIA reported another record number of new Covid-19 infections on Friday (9) and daily deaths hit their highest in more than five months, as it battles a second wave of infections and states complain of a persistent vaccine shortage.

Evoking memories of the last national lockdown when tens of thousands of people walked on foot back to their homes, hundreds of migrants in badly affected Mumbai packed into trains as bars, malls and restaurants have again been forced to down shutters.

The fledgling exodus could also spread the virus to India’s smaller towns and villages. The second surge has already been faster than the first, which peaked in September last year with 97,000 cases a day.

The world’s second most-populous country reported 131,968 new infections and 780 deaths on Friday – the biggest daily increase in fatalities since mid-October. Most of the cases again came from Maharashtra, where Mumbai is located.

India’s overall caseload has swelled to 13.06 million – the third-highest after the US and Brazil – and total deaths to 167,642. India’s total number of infections inched closer to Brazil’s 13.28 million.

The government blames the resurgence mainly on crowding and a reluctance to wear masks as businesses had nearly fully reopened since February, only to be partially shut down again as case have galloped.

Election rallies, where politicians including Modi and home minister Amit Shah have greeted hundreds of thousands of supporters, most of them not wearing masks, continued this week despite the record surge in cases.

“We all know that it’s because of the casual approach that has been adopted unfortunately by the society and some sort of laxity everywhere in following the discipline of the Covid- appropriate behaviour,” health minister Harsh Vardhan told a news conference, explaining the unexpected spike.

He denied on Thursday (8) there was any shortage of shots for the groups eligible for vaccination, with more than 43 million doses in stock or in the pipeline. India has been inoculating about 4 million people a day, tough only to those aged over 45 and health and front-line workers.

But several states, which are not ruled by prime minister Narendra Modi’s party, have disputed the minister’s claim and said they were rationing vaccines as the federal government was not refilling stocks in time.

Rahul Gandhi, the face of the main opposition Congress party, blamed the Modi government for exporting tens of millions of vaccine doses instead of focusing on immunisations at home.