India raises growth forecast to 9.2 per cent despite Covid risks 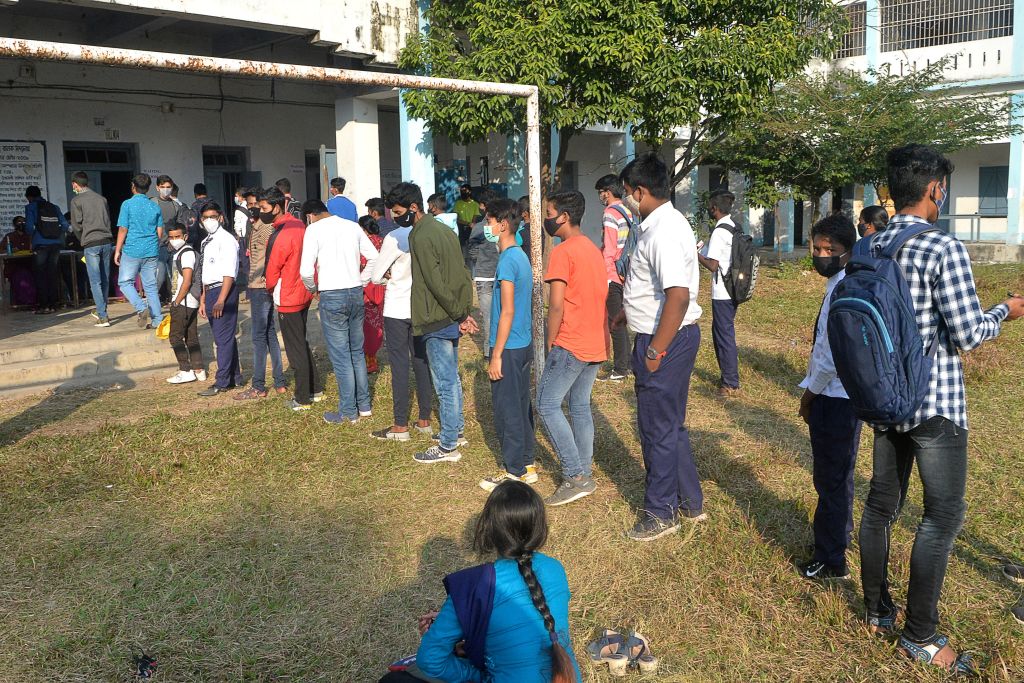 Students stand in a queue as they register to receive a dose of the Covaxin Covid-19 coronavirus vaccine at the Siliguri Boys High School in Siliguri, India, on January 4, 2022. Economists say a new pandemic surge could threaten India’s economic recovery. (Photo by DIPTENDU DUTTA/AFP via Getty Images)

INDIA on Friday (7) raised its growth estimates for this financial year to 9.2 per cent despite a surge in coronavirus infections threatening the country’s recovery.

The National Statistics Office (NSO) forecast Asia’s third-largest economy will bounce back strongly from a 7.3 per cent contraction last year when it saw a ferocious wave of coronavirus infections and deaths.

But economists say a new pandemic surge could threaten its economic recovery.

Madan Sabnavis, the chief economist at CARE Ratings, said the figures “say very clearly that they have not yet included the Covid impact”.

Prime minister Narendra Modi’s administration has so far refrained from announcing a drastic nationwide lockdown, as it seeks to limit the economic toll of the current wave.

“The impact on GDP growth will depend on the extent to which restrictions need to be extended across states in the coming weeks,” said Aditi Nayar, chief economist at ratings agency ICRA.

The NSO figures are below the most recent forecast by the International Monetary Fund, which projected 9.5 per cent GDP growth for India in the current financial year ending March 2022.

The country’s central bank has also estimated India’s GDP growth at 9.5 per cent this year, “assuming no resurgence in Covid-19 infections in India”.

But despite an apparent bounce-back in India’s headline growth numbers following the second wave, other economic indicators have remained under pressure.

The country’s unemployment rate touched a four-month high of 7.9 per cent in December, data from the Centre for Monitoring Indian Economy (CMIE) showed, revealing signs of strain even before the outbreak of the third wave.

India this week began vaccinating children aged between 15 and 18 years for the first time, administering over 12 million doses since January 3.

In total, the country of 1.3 billion has administered nearly 1.5 billion jabs, with 61 per cent of adults receiving two doses, according to the health ministry.

India will roll out third “booster” doses to senior citizens aged 60 years and over and those with co-morbidities beginning on Monday.