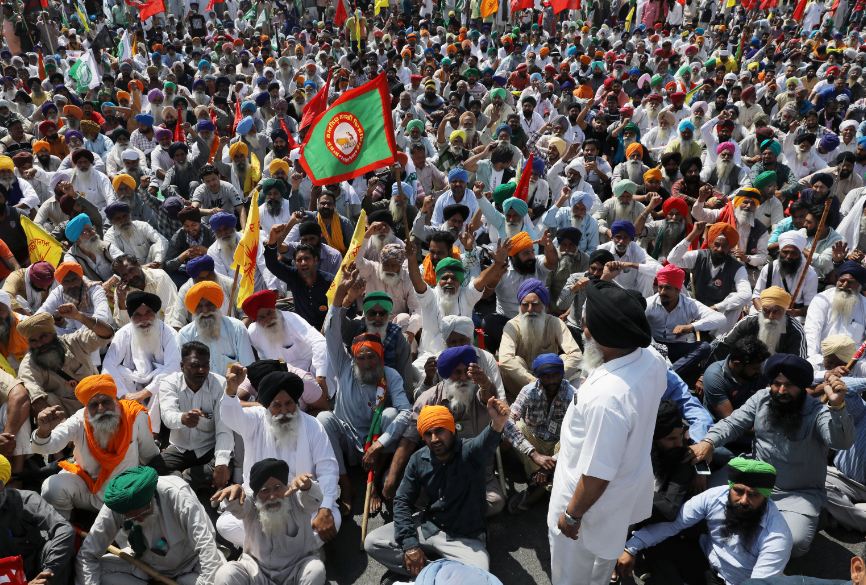 Farmers block an expressway to mark the 100th day of the protest against the farm laws, near Kundli border, in Haryana, India, March 6, 2021. (REUTERS/Anushree Fadnavis)
Follow Us

INDIA’S parliament voted on Monday (29) to scrap agricultural reform laws that sparked a year of huge protests by farmers, after a surprise U-turn by prime minister Narendra Modi.

Thousands of farmers have been camped out on the outskirts of the capital New Delhi since last year – one of the biggest challenges to Modi’s government since he came to power in 2014.

The rallies became a lightning rod for discontent in a country where two-thirds of the 1.3 billion population rely on agriculture for their livelihood.

In its first meeting for the winter session, both houses of India’s parliament rushed through a bill to scrap the laws, after Modi’s shock decision to reverse course earlier this month.

But farmers’ unions have vowed to keep up the fight against the government until they secure further concessions from the government.

They are seeking minimum prices for crops and compensation for the families of hundreds of farmers they said died during the protests, among other demands.

“I don’t think this government has any sympathy for farmers,” Vishavjot Mann, who joined a weekend rally for agricultural workers in Mumbai, told AFP.

Modi’s reversal came ahead of important elections for his Bharatiya Janata Party (BJP) in states such as Punjab and Uttar Pradesh, both home to huge numbers of farmers.

But protesting farmers said the new laws would lead to a corporate takeover of the industry.