‘India is a part of me’: Google and Alphabet CEO Sundar Pichai

He received India’s third-highest civilian award in the presence of his close family members in San Francisco on Friday. 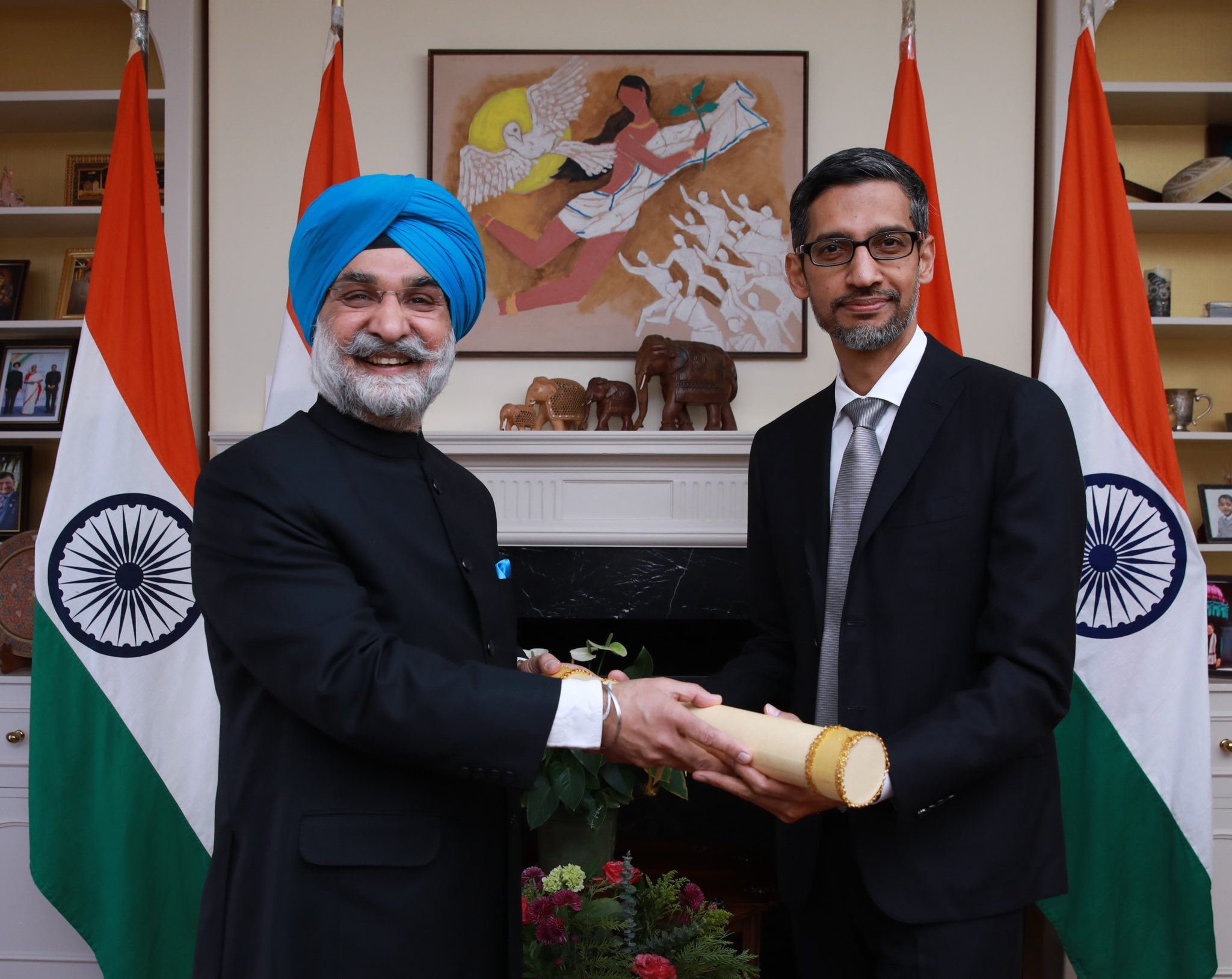 “India is a part of me and I carry it with me wherever I go,” Google and Alphabet CEO Sundar Pichai said, as he received the prestigious Padma Bhushan award from the Indian envoy to the US.

Indian-American Pichai was awarded the Padma Bhushan for 2022 in the Trade and Industry category. The Madurai-born Pichai was named one of the 17 awardees earlier this year.

He received India’s third-highest civilian award in the presence of his close family members in San Francisco on Friday.

“I am deeply grateful to the Indian government and the people of India for this immense honour. It is incredibly meaningful to be honoured in this way by the country that shaped me,” 50-year-old Pichai said while accepting the award from India’s Ambassador to the US, Taranjit Singh Sandhu.

“India is a part of me. I carry it with me wherever I go. (Unlike this beautiful award which I will keep somewhere safe),” he said.

“I was fortunate to grow up in a family that cherished learning and knowledge, with parents who sacrificed a lot to make sure I had opportunities to explore my interests,” Pichai said.

He said that Pichai represented the limitless possibilities of technology for transformation.

“He has been making commendable efforts towards making digital tools, and skills accessible to across various segments of the society in different parts of the globe,” he said.

Recalling Prime Minister Narendra Modi’s vision of technology that combines 3Ss – speed, simplicity and service, Sandhu hoped that Google would make full use of the digital revolution happening in India.

Pichai said that it had been amazing to return to India many times over the years to see the rapid pace of technological change.

The innovations created in India are benefitting people around the world – from digital payments to voice technology, he said.

“I look forward to continuing the great partnership between Google and India, as we work together to bring the benefits of technology to more people,” he said.

Businesses are seizing the opportunities for digital transformation, and more people have access to the internet than ever before, including in rural villages, Pichai said.

“Prime Minister Modi’s Digital India vision has certainly been an accelerator for that progress and I’m proud that Google continues to invest in India, partnering with governments, businesses, and communities over two transformative decades,” he said.

“Every new technology that arrived at our doorstep made our lives better. And that experience put me on a path to Google, and the chance to help build technology that improves the lives of people all over the world,” he said.

Later, Sandhu visited the Google office and interacted with a large gathering. He was joined by Pichai and the senior leadership of the company. Sandhu also sat down for a townhall with Google employees many of who had Indian roots.

“Excellent interaction with ‘googlers’ sharing perspectives on India’s approach to tech & innovation and building on synergies with the US. Thank you, Sundar Pichai, Global Head Govt Affairs @Karan_K_Bhatia & team for hosting,” he said in another tweet.

In their brief remarks, Sandhu and Pichai outlined opportunities for a stronger partnership between India and Google.

Pichai said he sees so much opportunity ahead. On India taking over the G20 presidency, Pichai said: “It’s an amazing opportunity to build consensus on strengthening the global economy by advancing an internet that is open, connected, secure, and works for everyone. That’s a goal we share, and are committed to advancing with you.” India formally assumed the G20 Presidency on Thursday.

“I am grateful for the opportunity to do this work together and bring the benefits of technology to more people,” Pichai said.

Google this year added 24 new languages to its translation service using a new advancement in machine learning. Eight of them are languages native to India.

“It means so much to see how people can access information and knowledge in their preferred language, and see the world open up to them in new ways. That’s why I continue to be so optimistic about technology, and why I believe India can and must continue to lead,” he added.