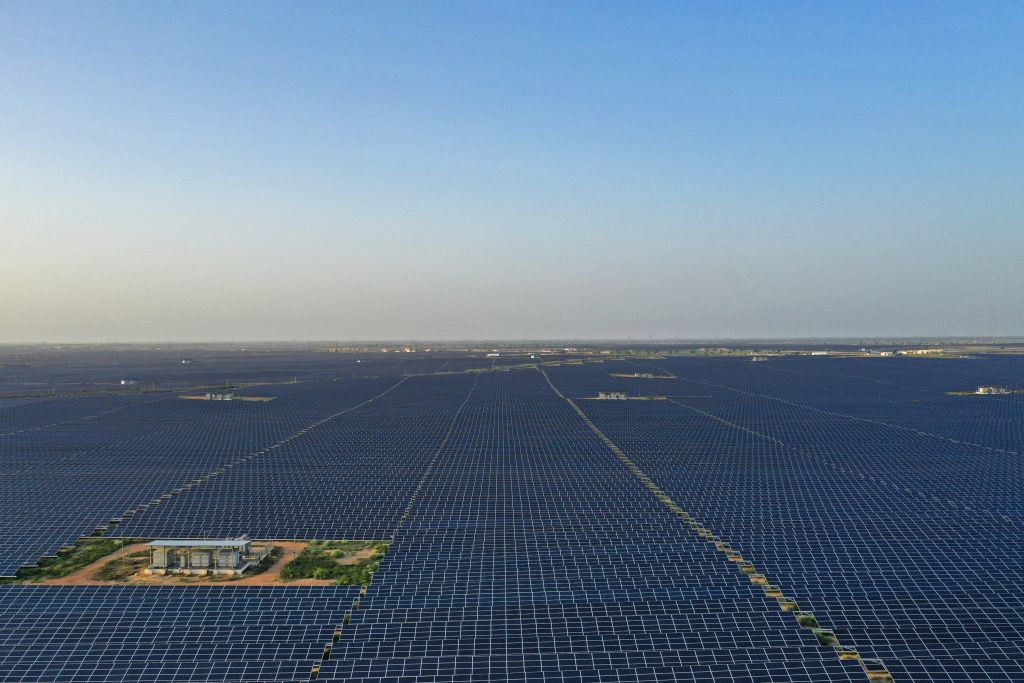 This photo taken on October 6, 2021 shows solar panels at the site of solar energy projects developer Saurya Urja Company of Rajasthan Limited, at the Bhadla Solar Park in Bhadla, in the northern Indian state of Rajasthan. India aims to reach an installed renewable energy generation capacity of 175 GW in 2022. (Photo by SAJJAD HUSSAIN/AFP via Getty Images)
Follow Us

AFTER witnessing cloudy skies this year, India’s renewable energy sector is expected to boom in 2022.

An investment of more than $15 billion (£11.1 bn) is expected next year as the government focuses on electric vehicles, green hydrogen, manufacturing of solar equipment as well as achieving the ambitious 175 GW renewable capacity target.

India, which has an installed renewable energy generation capacity of a little more than 150 GW, aims to reach 175 GW in 2022. Out of the total mix, 100 GW would be from solar, 60 GW from wind, 10 GW from bio-power and 5 GW from small hydropower projects.

The second wave of Covid-19, which started in April, had impacted the implementation of various renewable energy projects as states imposed restrictions to curb the spread of infections.

At COP 21, as part of its Nationally Determined Contributions (NDCs), India committed to achieving 40 per cent of its installed electricity capacity from non-fossil energy sources by 2030. India achieved this target in November 2021 itself.

Together, the non-fossil-based installed energy capacity is 157.32 GW, which is 40.1 per cent of the total installed electricity capacity of 392.01 GW.

India aims to have 500 GW of installed renewable energy (RE) capacity by 2030.

Talking about boosting investments in the RE space, Singh said, “We have also opened the gates for installation of RE and selling it through open access. Now, anybody can set up RE capacity and sell it wherever they want.”

These include the upstage vertical components like cells, wafers, ingots and polysilicon. The initiative is expected to reduce import dependence in the solar PV sector.