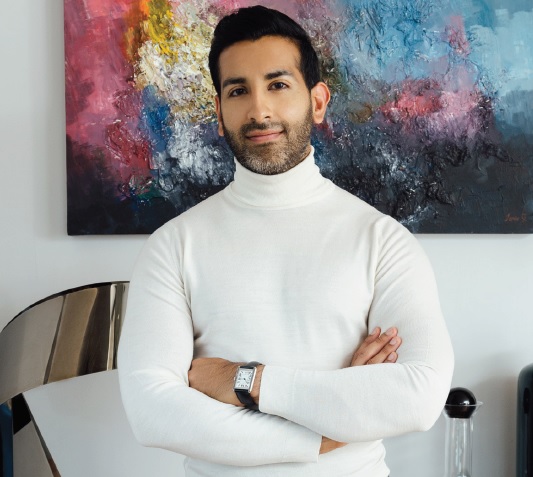 JAMIE GILL is a name that should be on every fashion lover’s lips.

Following a career that spanned architecture, fi­nance and fashion, the 32-year-old was recently ap­pointed to the British Fashion Council (BFC) as a non-executive director.

His star looks set to rise as it was only two years ago that Gill was named CEO of luxury fashion brand Roksanda. Since he took charge at the label – whose outfits have been worn by the Duchess of Cambridge and A-list Hollywood stars – Gill worked to restruc­ture the business and also launched a global collab­oration with athletic apparel brand Lululemon.

His remarkable rise in the industry comes after he endured years of racist bullying while growing up.

Born to British-Indian parents in the Midlands, Gill was the only Asian boy in his school. He said he suffered racist bullying from his peers throughout his years in education, but growing up in a white, working-class area in Derbyshire, he faced racism from adults too.

“It could almost be stomachable when the abuse was from another child, but it wasn’t when it was from an adult,” he told Eastern Eye.

“Now, it sounds like an arrestable offence, but some people in my area at that time felt comfortable enough to do that to an 11 year-old.”

In addition, Gill was struggling with his sexuality. Homosexuality was seen as a taboo growing up, he said, so he had no idea where to turn. Describing himself as an “awkward teenager”, Gill initially be­lieved his attraction to men was “an illness”.

“I was 22 when I came out, so until then I always had this horrible feeling of carrying it with me and not being able to be myself,” he said.

“When I was myself, I was a bit more expressive with fashion, my hair or my interests, (but) I was im­mediately victimised for being different. It does take its toll on you. It is hard to conceal something that is so natural to you, but your envi­ronment rejects it until you get to a place that embraces it.”

As he struggled grow­ing up, Gill took com­fort in fashion. Brows­ing through magazines, newspa­pers and watch­ing advertising campaigns on TV exposed Gill to a glamorous and successful world which he wanted to be a part of.

The fasci­nation came from the idea of an environ­ment which was so vastly differ­ent to his own, he said. It became a form of escapism for him. He espe­cially looked up to fashion designer Tom Ford, who became the creative director of Gu­cci when he was just 30.

“I just started falling in love and believing in the brand imagery which showed a better quality of life than the cards I had been dealt,” he said.

“This idealism that brands create and entice you into make you feel you can be part of this fabulous, wealthy, good-looking world.”

With a creative career in mind, Gill aspired to be an architect. After attaining his bachelor’s degree in architecture at Nottingham University, Gill moved to London and worked at a number of design practices. However, it was in the middle of the financial reces­sion and times were tough for the industry.

After much thought, he decided to leave architec­ture and switched to finance when he was 22. He joined Deloitte – one of the Big Four accounting organisations – and worked as an advisor there for five years.

It was during this time that Gill admitted facing one of the biggest career challenges in his life. He was studying for his chartered accountancy exams and there was the added pressure to build net­works with high-profile clients.

At Deloitte, if an employee failed an exam twice, their employment would be terminated, he said.

“I failed the first accounting exam as soon as I joined Deloitte, so I had to make sure that I passed to retain the job,” Gill recalled. “I did eventually and continued at work, but it was just a huge level of pressure at such at an early age.”

Gill also became aware that he did not want to stay in the financial world forever. Despite making a name for himself at Deloitte, the fashion world was never far from his mind.

“I realised after joining Deloitte that a luxury brand was where I wanted to be.”

His desire for the fashion world endured and Gill decided to leave the corporate world. He set up a luxury apparel start-up with a friend and re­located to Mumbai to focus on the Indian bridal market. He returned to London in 2015 after being unable to raise capital funding, which he needed to keep the start-up running.

It did not deter Gill by any means. He joined a family office fund looking at growing a portfolio of British luxury brands, which at the time included Roksanda, where he joined the board. Founded by Serbian fashion designer Roksanda Ilincic in 2005, the luxury brand has gone from strength to strength since its launch and has been worn by the Duchess of Cambridge, Michelle Obama and ac­tress Keira Knightley, among others.

In 2018, aged 30, Gill was asked to take over as CEO of the fashion company. He described the appointment as the highlight of his career.

“It’s a brand that I had been fascinated by for a long time,” he revealed.

“Even back in 2014, Roksanda was such an in­spiration for spearheading London Fashion Week. To actually find myself in the position I was in, joining the venture capital fund who invested in her and then [to be] on the board and then ulti­mately taking over…I didn’t actually see it coming. It was an amazing moment.”

Earlier this month, another career highlight came in the form of his appointment at the BFC, which he admitted “means the world to him”.

“I am so proud of all the great work the BFC does and I am excited to now play a role in helping shape the council’s cause in the industry,” he said.

Gill is keen to emphasise the point that fashion is a career avenue for all walks of life. Although he acknowledged that any community can be big fash­ion consumers, he does not believe south Asians see it as a viable career option. “Even when I studied ar­chitecture, my family thought I was going against the grain,” he stated.

He believes the Asian community is innately busi­ness savvy, which could be beneficial for making a move into the fashion industry.

“I’ve grown up in a family which has always been into business, be it a takeaway or an off-licence,” he said. “Just being close to where you pick up that un­derstanding around profitability, and what good business is really beneficial for this industry.”

He hopes he can continue to raise his profile in the fashion world – partly so he can be on the radar for the Asian community as an example of the heights they could reach in the industry. “If I can be on the radar for some of those [individuals who] might be interested to invest or require my expertise or some­thing, that wouldn’t be a bad thing,” he said.

Reflecting on his childhood, Gill said he was “proud that he was not there any more”.

If he could speak to his teenage self now, he said he would stress the need to keep going, make the most of any opportunities and believe “you’re going to get everything that you want if you work for it”.

“I’m still on my journey,” he said. “No way have I made it, but this is a good learning ground now for what the future holds, too. I’m just pleased that I have always kept that determination.”