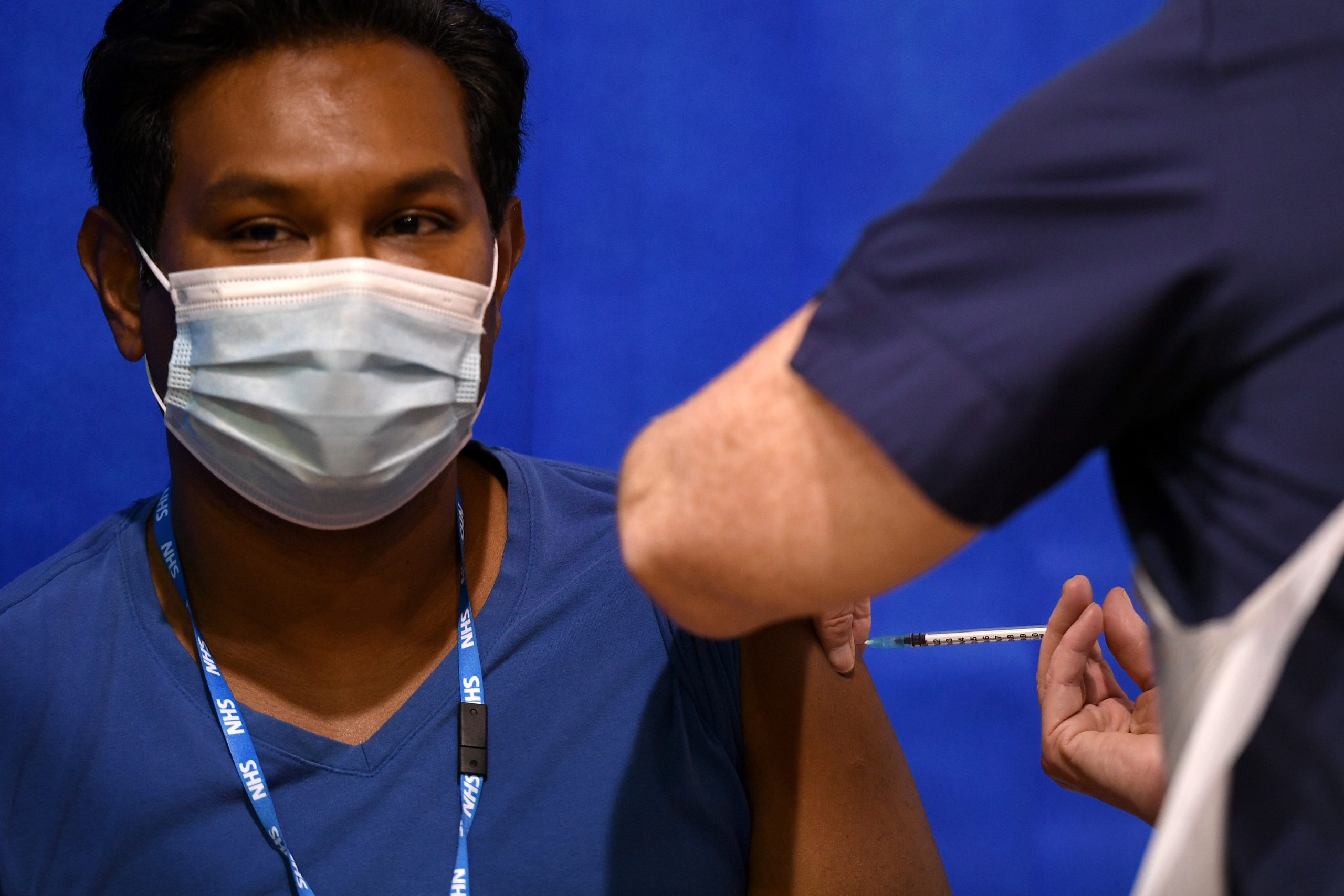 A nurse administers the Covid-19 vaccine to a person in Cardiff, Wales.
Follow Us

Despite stark failures in curbing Covid-19’s spread, Britain has scored a notable success with its mass vaccination drive, giving 15 million people a first dose by Sunday.

Here are some of the factors behind the speedy rollout.

In May 2020 the UK government signed a deal with the University of Oxford and the pharmaceutical giant AstraZeneca to buy 100 million doses of their still unproven vaccine, three months before the European Union followed suit.

In early December Britain became the first country in the world to approve the Pfizer-BioNTech vaccine.

The first jab was given to 90-year-old Margaret Keenan just six days later, as it led the world in launching a mass vaccination programme using a fully trialled inoculation.

Weeks later, it was the first country to authorise the Oxford-AstraZeneca vaccine, while other countries demurred over its less clear-cut trial results.

The EU regulator recommended the bloc approve the vaccine in late January. Some of EU members have since decided not to offer it to over-65s.

Some have suggested Brexit — Britain’s formal departure from the European Union in January 2020 — had allowed it to make its own decisions without having to wait for Brussels.

The Oxford-AstraZeneca vaccine has been hailed as a game-changer, because it is easier to transport and store without the need for ultra-low temperatures like the Pfizer-BioNTech jab.

After imposing another national lockdown in England in early January, prime minister Boris Johnson vowed all priority groups would have been offered jabs by mid-February.

Although initially appearing over-optimistic, the country hit the target over the weekend, meaning one in every four adults in the UK had now received an initial dose.

While this is controversial, UK officials insist it gives good initial protection and last week saw their policy backed by the World Health Organization.

The NHS opened thousands of temporary vaccine centres, including in cathedrals, temples and sports venues such as football stadiums and Lord’s cricket ground in London.

While GPs are involved, volunteers have also been trained to administer the jab.

The St John Ambulance Service that specialises in first aid education is training more than 30,000 volunteers.

Hundreds of serving military, some trained medics, are helping set up and run vaccine centres, and handle complicated logistics.

Queen Elizabeth, 94, and her 99-year-old husband Prince Philip got their first doses in early January.

Her eldest son and heir Prince Charles, 72, and his second wife, Camilla, 73, got theirs in February.

Celebrities have urged people to get vaccinated, including 73-year-old pop star Elton John and the actor Michael Caine, 87, who took part in an ad for the NHS.

Black and Asian MPs and GPs also joined a public campaign to encourage more ethnic minorities, who are typically more reluctant to get vaccines, to receive a jab.

Online anti-vaxxing campaigns have been blamed for poor take-up of vaccines among black, Asian and minority ethnic (BAME) communities, which are disproportionately affected by the virus.

False claims include that the vaccines contain pork.

The Royal College of GPs said this month that its data analysis found Asian people were only 47 percent as likely as white people to get vaccinated.

The pace of vaccine rollout in the UK has also fluctuated due to the vaccine supplies available.

Both Pfizer and AstraZeneca in January told the EU they would delay promised supplies due to problems with production.

The appearance of new variants may mean they have to adapt their vaccines.