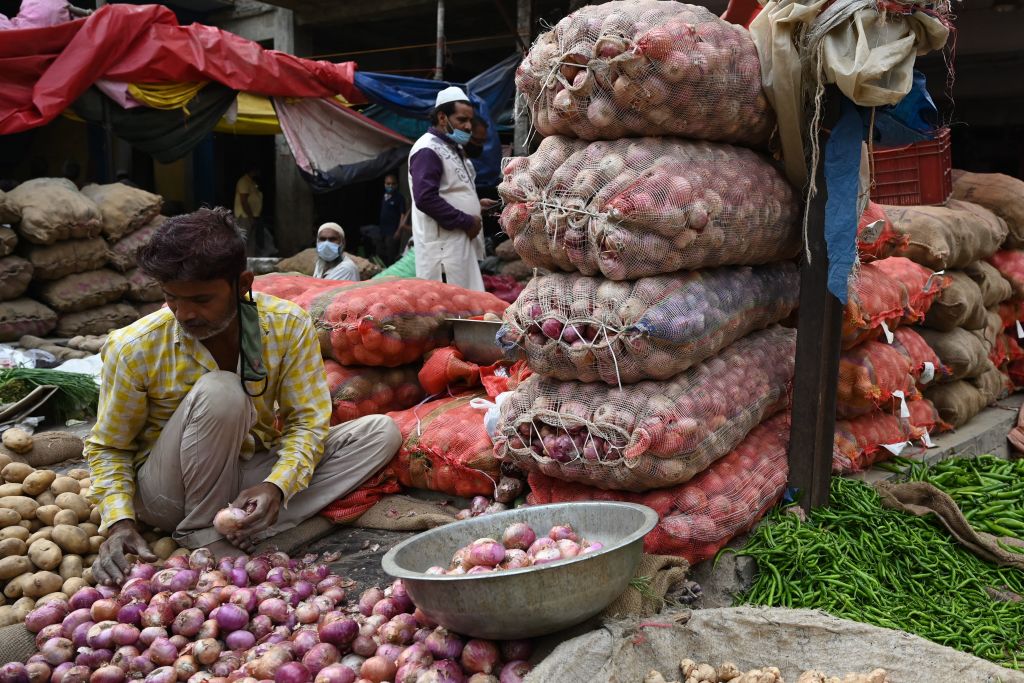 FILE PHOTO: A vendor sorts onions while waiting for customers at a wholesale vegetable market in New Delhi on May 17, 2021 (Photo by ARUN SANKAR/AFP via Getty Images)

AFTER the cost of fuel and edible oils hit record highs, Indian consumers are likely to be further squeezed by a rally in onion prices after heavy rainfall in the country’s key growing regions damaged the summer-sown crop and delayed winter crop planting.

Onions are also a politically-sensitive commodity, with price spikes contributing to the fall of more than one state government in the past.

“The price of every essential commodity has gone up. Edible oil, sugar prices rose earlier and now onions and tomato prices have more than doubled in a fortnight, how one can manage a monthly budget when incomes are not rising?” said Mumbai-resident Shubhangi Patil.

“Too much rainfall in September led to disease attack and stunted growth of onion bulbs,” says Samadhan Bagul, a farmer from Dhule district, nearly 325 km north of Mumbai, who expects to harvest just one tonne of onions from an acre of land instead of his usual five tonnes.

Key onion producing states such as Maharashtra, Madhya Pradesh, Gujarat and Karnataka received as much as 268 per cent more rainfall than normal in September, according to the weather department.

The crop damage limited supplies, more than doubling wholesale prices at India’s largest onion trading hub, Lasalgaon in Maharashtra, to Rs 33,400 ($444.82) per tonne in just a month. Retail prices in metro areas such as Mumbai have jumped above Rs 50 a kilogram.

Onion prices are likely to remain firm during the current festive season before starting to moderate from mid-January when supplies rise from the new season crop, said a Mumbai-based dealer, who declined to be named.

The higher Indian prices have prompted importing countries to shift to other suppliers such as Turkey and Egypt, said Ajit Shah, president of the Mumbai-based Onion Exporters’ Association.

India banned onion exports in 2019 and 2020 for a few months to calm local prices, creating a shortage in neighbouring countries such as Bangladesh and Sri Lanka.

The government has also been trying to bring down food prices this year and has taken measures such as cutting duty to lower the cost of edible oils.

“India could ban exports like in the past if the government feels onion prices have risen too much and too fast,” said a Mumbai-based onion exporter.