He is a bit of God: Nick Kyrgios praises Novak Djokovic after losing Wimbledon final 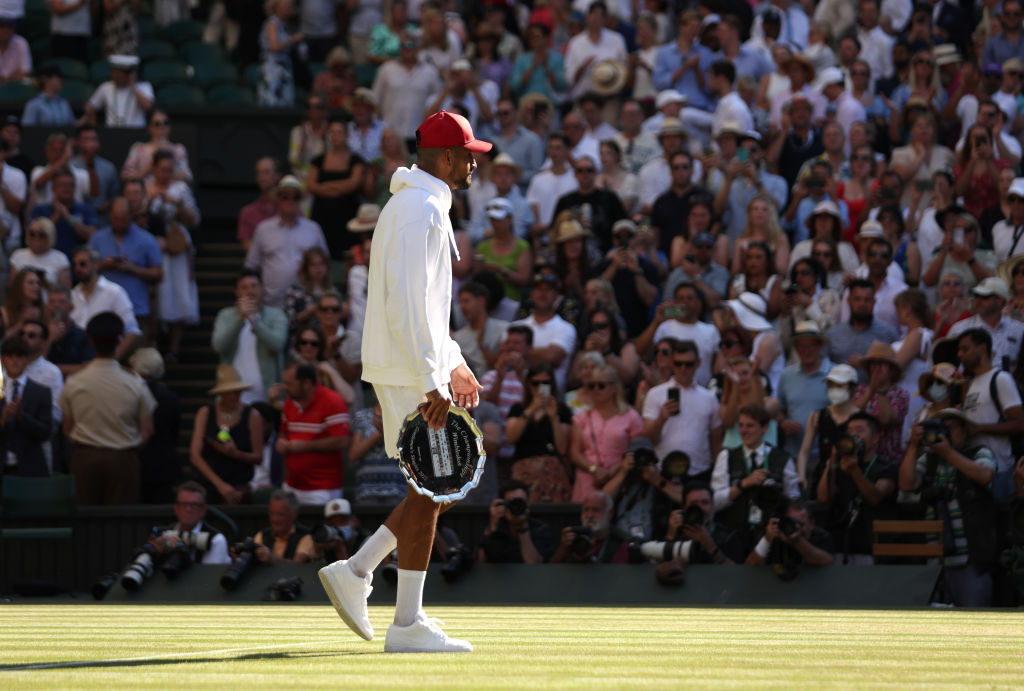 Runner up Nick Kyrgios of Australia looks on with his runner up trophy following his defeat to Novak Djokovic of Serbia during their Men’s Singles Final match on day fourteen of The Championships Wimbledon 2022 at All England Lawn Tennis and Croquet Club on July 10, 2022 in London, England. (Photo by Clive Brunskill/Getty Images)
Follow Us

After suffering a defeat against Novak Djokovic in the Wimbledon final on Sunday, Nick Kyrgios hailed the 21-time Grand Slam champion and termed him ‘God.’

“He’s a bit of God, I’m not gonna lie. I thought I played well. It’s been an amazing couple of weeks for me. Really happy with this result, probably the best of my career and hopefully maybe one day I’ll be here again, but I don’t know about that,” Kyrgios said in a post-match press conference.

World No. 40 feels that Djokovic’s experience showed in the key moments, with the Serbian capturing his 21st Grand Slam title.
“I felt like he just has so much experience to draw to. He’s won the tournament four times in a row. When you win an event that much, when you’ve been in those situations, it’s unbelievable,” Kyrgios said.

“You can tell yourself you’ve been here before. The confidence and the belief in yourself, that only comes with achievement or something that he’s achieved like that many times. I can only imagine how confident he feels every day, especially at Wimbledon, walking around,” he added.

After taking the first set, Kyrgios was unable to push on and clinch his first Grand Slam title. However, the Australian was happy with his performance.

“I thought I handled myself well today. I came out there and I did what I had to do tactically to give myself a chance. I served amazing I thought today, and he was just able to put so many balls in play. I just came up short, and I’m happy with that,” Kyrgios said.

The Australian won the first set against Novak Djokovic Sunday before the Serbian turned the tables to seal his seventh crown at the Championships on Centre Court.

“My level is right there. I feel like you look at what Novak has done to some other opponents, it’s not a good feeling. But I’m right there,” Kyrgios said.

“I’m not behind the eight ball at all. I played a Slam final against one of the greatest of all time, and I was right there. [I will take] confidence. It was a hell of an occasion… I came out in the first set and I looked like I was the one who had played in a lot of finals. I thought I dealt with the pressure pretty well,” he added.