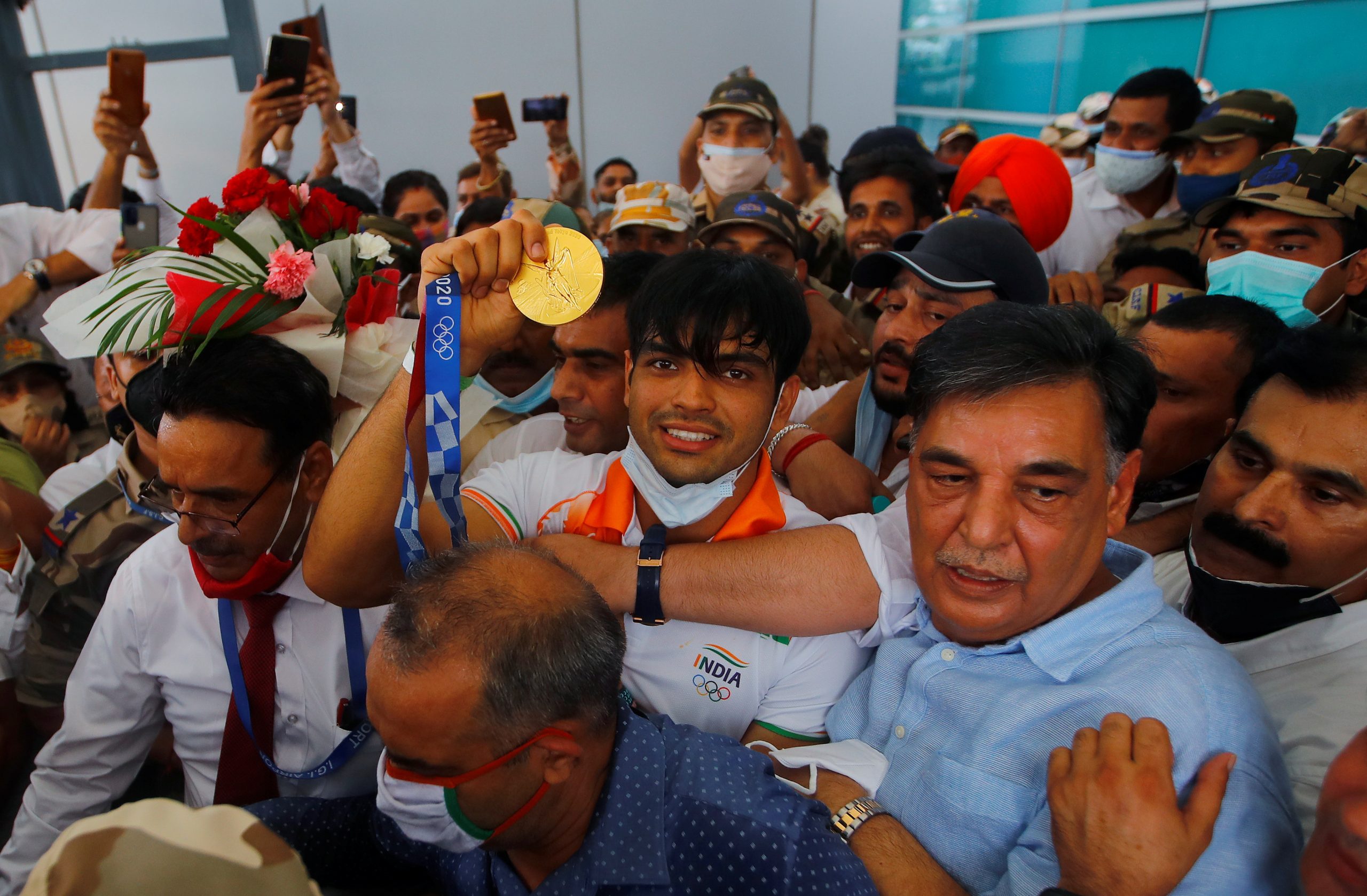 India’s triumphant Olympic contingent, including history-making javelin throw gold-medallist Neeraj Chopra, returned to the country on Monday (9) and was greeted by frenzy and chaos at the airport where supporters jostled to catch a glimpse of their sporting heroes.

The athletes were welcomed by a Sports Authority of India (SAI) delegation headed by its director general Sandeep Pradhan, who was accompanied by Athletics Federation of India head Adille Sumariwala.

There was loud cheering by euphoric fans, family members, and some local political leaders as returning athletes made their way through a massive crowd both inside and outside the airport.

Waving the tri-colour, people danced to the beat of drums and live band, sang and screamed their lungs out to show their appreciation for the medal winners.

The huge gathering meant that social distancing norms went for a toss as several, quite a lot of them without masks, rushed in to catch a glimpse of the stars.

Some were even seen doing push-ups and planks just outside the airport in their enthusiasm. Inside, Chopra and other medal winners struggled to get past a selfie-seeking crowd.

“We are here to support our heroes. We are proud of them,” said a young girl, who claimed to be a budding athlete herself.

The most dramatic exit was made by bronze-medallist wrestler Bajrang Punia, who was seen greeting and waving towards his supporters from the sunroof of an SUV, which had several fans clinging to it defying all traffic rules as it made its way out of the airport.

“We will try to do better next time, I had a knee problem,” Punia, who had entered the Games as a gold favourite, said.

The athletes were garlanded and presented with bouquets on arrival and were applauded by the airport staff as they made their way out to utter chaos.

They were then whisked away for a felicitation function by sports minister Anurag Thakur later this evening.

“It is the first time we are seeing a reception like this, it is very heartening,” said race walker KT Irfan, who competed in the 20km race walk event.

India surpassed their previous best haul of six medals achieved in the 2012 London Games with one gold, two silver and four bronze medals in Tokyo.

While Chopra added the golden sheen to the campaign, the silver medals came from weightlifter Mirabai Chanu and wrestler Ravi Kumar Dahiya.

The spotlight, however, is bound to target Chopra, whose gold was India’s first in 13 years overall and the first ever in the track and field events.

The 23-year-old is also an Asian and Commonwealth Games champion and bossed the field with a throw of 87.58m in the finals to comfortably claim the gold in Tokyo.

Of the medal winners, Chanu and Sindhu had returned to the country a few days earlier after the completion of their events as COVID-19 protocols required athletes to leave Tokyo within 48 hours of the medal ceremony.

India had sent a 228-strong contingent for the Games, including more than 120 athletes.

This was the country’s biggest ever presence at the quadrennial showpiece which took place after a delay of one year due to the pandemic.

Despite the many challenges they faced while training for the Games amid lockdowns and lack of competitive action, the Indians managed to surpass all expectations with their efforts, which also included some impressive but medal-less performances.

“It is a proud moment for the country and the state of Haryana. Neeraj and Ravi are both from Haryana,” said state Congress leader Deepender Singh Hooda, who was also at the airport to welcome the athletes.