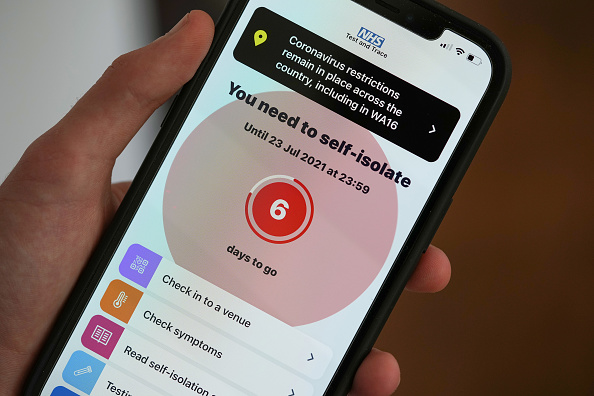 FEWER people will now get “pinged” after coming in close contact with a positive case as changes have been made in the NHS app, Department of Health and Social Care announced today (2). The announcement comes amid the widespread “pingdemic” as hundreds of thousands of Britons were told to self-isolate leading to reports of disruption in essential services.

Following an update today, fewer contacts will be notified by the app, the department said urging public to continue using the app amid concerns, fuelling by polling evidence, that people have been uninstalling the app en masse to prevent it from telling them to self-isolate.

In an announcement on Monday afternoon ministers said the app would now only “ping” a person’s close contacts from the two days prior to a positive test, instead of the current five days.

The change will mean fewer contacts that took place when the positive case was unlikely to be at the peak of their infectiousness are advised to self-isolate, reducing the overall number of notifications sent by the app, the department said, adding that the update does not impact the sensitivity of the app, or change the risk threshold, and will result in the same number of high-risk contacts being advised to self-isolate.

Health and social care secretary, Sajid Javid said: “We want to reduce the disruption that self-isolation can cause for people and businesses, while ensuring we’re protecting those most at risk from this virus.

“This update to the app will help ensure that we are striking the right balance,” Javid said, adding that it is “important that people isolate when asked to do so in order to stop the spread of the virus and protect their communities”.

New analysis from leading scientists shows that in the first three weeks of July, as cases were exponentially rising, the app averted up to 2,000 cases per day and estimated to have prevented 1,600 hospitalisations.

“The NHS Covid-19 App is a really practical example of how technology can be used to fight the biggest challenges we face in protecting and improving our health,” Dr Jenny Harries, CEO of UK Health Security Agency, said, while encouraging everyone to continue using the app.

From 16 August, fully vaccinated contacts in England will be exempt from isolation and instead will be advised to take a PCR test. Those who are not fully vaccinated will still be required to isolate, and it will remain a legal obligation to isolate if you test positive for Covid-19.