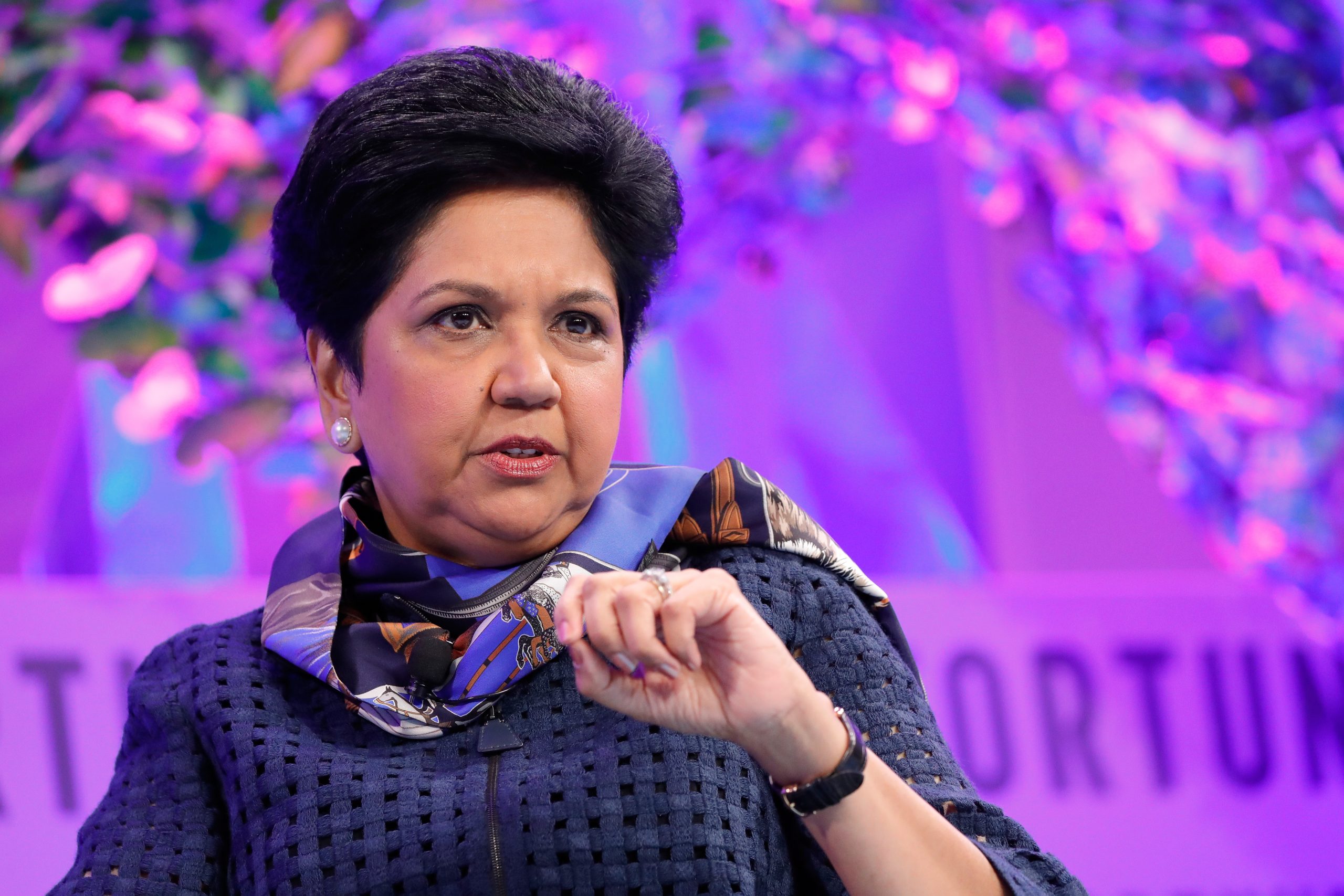 Chief executives must challenge bad behaviour which stops women and minorities from progressing, according to the former CEO and chair of global company PepsiCo, Indra Nooyi.

Speaking at the GG2 Leadership Series (12) the first Asian woman to lead a Fortune 500 company warned that firms would lose the war on talent if they did not act immediately to stamp out racism and sexism.

“If the tone at the top accepts bad behaviour, if your HR department does not intervene, when they see bad behaviour, then the company’s in trouble,” Nooyi told the audience.

“The CEO and the head of HR are also looking at it, and [it’s] not just delegated to a diversity officer.

“If the mainstream leaders look at it and want to do something about it, it works, and company cultures will change.”

Nooyi was in the UK to promote her autobiography, My Life In Full. The event was organised by Eastern Eye’s parent company, Asian Media Group (AMG).

The book charts her life, from being born in Chennai a few years after Indian independence, to her climb to the top of the multi-billion-dollar American drinks and snacks empire.

During her tenure as CEO and chair, Nooyi put diversity, in all its forms, at the heart of everything she did, but paid tribute to her predecessor, Steven Reinemund for starting the journey.

“What he did was the best thing because he said, you can’t create a diverse organisation make people feel included unless you force numbers into the company.

“So, he set up a scorecard which said, parity hiring, parity promotion, parity retention.

“If you’re going to hire 10 people, five people are going to have to be diverse, go find them. He tied our bonuses to that scorecard.

“Not that we liked it, I’ll be honest with you, because it was very, very hard to hire people. But he said, they’re out there, you just don’t look for them hard enough.

“Once we got a critical mass of people, and we’re diverse, we could build inclusion programmes on top of that diversity, and he watched everybody like a hawk.

“Steve did a brilliant job with that. I’ve got to give him credit because he set the stage for me.”

For Nooyi, it was about going further and building a ‘talent pipeline’.

“Every job that was open, we made sure the slate was diverse, and we publicly published goals on what percentage of senior management and the company was going to be, the people of colour or diverse people.

“We reported on progress in our reports every year, so the whole world knew exactly how we were doing.

“We were not always successful, sometimes we might lose a person to some other company which raids you, which is inevitable.

“But we were honest about that, too, and then we go back and fill the pipeline.

“We built a talent pipeline, quite a good one.”

And to build that pipeline, diversity was the number one priority.

“In today’s world, where there’s a war for talent, you need all the best and brightest working in the company,” said Nooyi.

“You can’t afford to be too picky about one kind of race or gender to work in the company, you’ve got to go for the talent as opposed to trying to recruit somebody just like you.

“All of us know that just having somebody just like you may make the decision process quicker, but not better.

“So, you’ve got to recognise that diversity around the table actually improves the decision making.”

When Nooyi became CEO, she was only one of 11 women leaders in the Fortune 500.

She acknowledges that is because of her immensely supportive husband, Raj, and her multi-generational family.

The cultural south Asian tradition of extended family helping and being supportive usually applies to the men.

But in Nooyi’s case everyone knew that she could not and should not be hampered because she was a woman.

“Decide for yourself whether you really want to make this journey,” she said when asked what advice she would give to aspiring female leaders.

“Because the organisation’s a pyramid that narrows enormously as it gets to the top.

“So, the journey is not easy, and if you want to make that journey, while also having a family, better build a big support structure, and have incredible courage and resilience to go through the journey.

“Otherwise, it’s just not worth it.”

But that is not to say Nooyi was a hands-off mother. Far from it, she put in place a structure which made sure that her children knew their boundaries.

“Remember, those are the days where we didn’t have cell phones and texting and FaceTime, none of that stuff,” she recalled.

“The kids had rules on how long they could play Nintendo.

“They would call the office, I’d be in Japan or someplace, and the receptionist or the secretaries knew it was my daughter, because only they would call and say I want to talk to my mommy without explaining who they were.

“So, they’ve been trained. ‘Have you finished your homework?’ They’ll go through a checklist that they’ve all been given, and because they’re all women who’ve had children, they know what the drill is.

“Then they leave me a voicemail saying, ‘Tara called, we went through these questions, we gave her permission to play Nintendo for half an hour.’

“So, when I called her, there’s got to be a seamless transition.

“I think that it is impossible to juggle homework, children, all that stuff unless you have a support structure.”

“Three strikes and you’re out”

One negative aspect of leadership, especially for women and minorities, are micro-aggressions from men and white people.

Nooyi faced unsupportive colleagues, some of whom humiliated her.

One day, she went to her CEO and said she would quit PepsiCo after the latest presentation because she felt he had not supported her enough.

To this day Nooyi does not know what her boss did after she threated to leave, but within hours those same colleagues were supportive of her and her ideas.

So, how does she deal with people who are not supportive or did not deliver what she wanted?

“First of all, you never let somebody go because they didn’t do what you wanted them to do,” she told the audience.

“You give them feedback and say, ‘Look, I expected this deliverable, this quality, in this date, and you didn’t do it.

“’Let me tell you what was lacking in the product you delivered to me, and I wouldn’t like to see that happen again.’

“Then you watch them, you give them a little bit of help to get to the next project and see if they can deliver.

“If they don’t ask for help, they don’t deliver what they’re supposed to, then you tell them they have a couple of choices.

“They can go down a level and work their way back up, or they can go out. Their choice, but if they don’t pick one of the two, then you tell them ‘Look, I think you’re better off in some other place.’”

In the book, the former global business leader described how one white boss had rented a house in the United States but offered it to her when she could not find suitable accommodation for her family.

But the landlord said it was no longer available, a clear case of racism.

Yet in her memoirs, Nooyi skirts around the racism she faced, and during the hour-long conversation she was equally clear that focusing on it was unproductive.

“I had the support of this incredible boss,” she explained, because he too refused rent the property after what happened.

“At that point, you’ve got to decide which battle you’re going to fight at that point. I felt it was their loss.

“If they’re not going to give it to somebody who’s going to pay their rent on time and extraordinary rent on time, it’s your loss.

“You have to be careful to define the country on the 95 per cent of the people that are wonderful, not the five per cent that are not. So, I focus on the 95, and my journey has been made possible by the 95.”

Nooyi paid tribute to the male bosses who mentored her.

But challenged on whether they merely mentored her or truly championed her, she responded, “I think the biggest difference is that mentors not just give you advice, they actually actively pull you up.

“They look for opportunities for you, in promotional opportunities, place you there, and make sure you’re successful in that new job, and they create the environment for you to be successful.

“We have to earn it. It doesn’t come by itself.

“But once you get a support, hold on to them for dear life, because they’re very few and far between.”