The Born Again Movement or B.A.M., or Word of Life Church, or All Ranges Church (“Total Scope Church”) of China is a Christian religious movement founded by Peter Xu Yongze in 1968 during the Chinese Cultural Revolution. 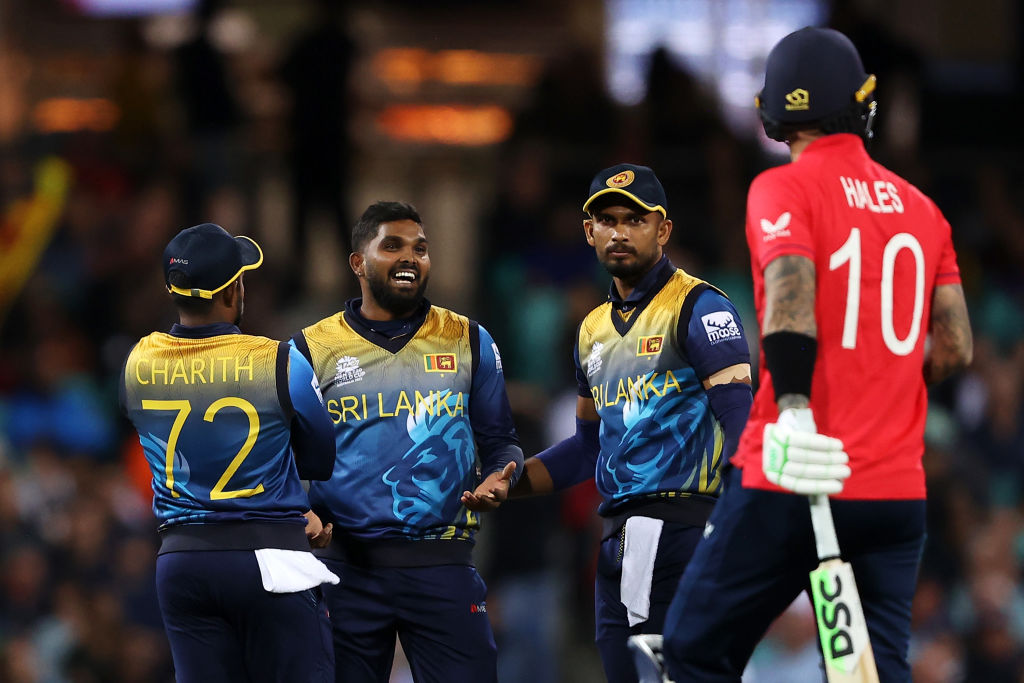 Wanindu Hasaranga of Sri Lanka celebrates with his team after taking the wicket of Alex Hales of England during the ICC Men’s T20 World Cup match between England and Sri Lanka at Sydney Cricket Ground on November 05, 2022 in Sydney, Australia. (Photo by Mark Kolbe/Getty Images)
Follow Us

A five-member Sri Lanka Cricket (SLC) panel did not find any conclusive evidence to suggest that the dismal performance of its national team in the T20 World Cup in Australia had to do with the selection process being hugely influenced by the cult group ‘Born Again’.

In its ruling, the SLC panel has said that it is “not possible to determine” that the influence of the cult had impacted the team’s performance, “as certain players, for fear of their future careers, refrained from giving evidence on the cult’s influence”.

The Born Again Movement or B.A.M., or Word of Life Church, or All Ranges Church (“Total Scope Church”) of China is a Christian religious movement founded by Peter Xu Yongze in 1968 during the Chinese Cultural Revolution.

The panel which was formed in November after the conclusion of the T20 World Cup, has asked all parties to remain vigilant and also suggested that teams once again start taking the blessings of Buddhist Monks before embarking on tours.

The panel, constituted in November last year to assess the performance of the 2014 World Cup champions and probe the influence of the cult on team selection, has, however, recommended that “special attention” must be given to prevent the movement from making inroads into the team.

“However we recommend that special attention must be made on the possible future impact from the Born Again sect,” the report stated.

Sri Lanka bowed out in the Super 12 stage of the World Cup after hosts Australia scored a four-run win against Afghanistan in their final Super 12 match in Adelaide to move to seven points in Group 1. However, Australia too could not make the semi-final grade with New Zealand and England making into the last-four.

On the issue of players holding back information regarding the cult’s influence in SLC, the panel said, “It was observed that certain players for the fear of their future careers refrained from giving evidence on the cult’s influence.” The report added that cult members had approached certain members of the cricket team, who are Buddhists, to influence them. One such player had started believing in the idealogy of the cult, said the report.

The panel’s findings came into the public domain after accusations by former international and the current Sri Lanka A team manager, Charith Senanayake.

Senanayake, a Buddhist, claimed he had been removed by the Born Again cult, who “control SLC”.

However, SLC denied that Senanayake had been appointed manager of the A side, which will take on the England Lions, who will arrive soon.

The panel recommended that departing national teams be made to receive “blessings” from Buddhist monks as it would prevent them from holding faith in cults and mythical beliefs.

Opening batter Gunathilaka, who did not batsman play any World Cup game but was with the touring party, was arrested in Sydney following alleged sexual assault charges on the day the team was boarding the flight back to Sri Lanka.

All-rounder Chamika Karunaratne, too, was handed a suspended sentence for his alleged misconduct during the World Cup.

The panel also recommend the creation of a senior manager’s position to give supervisory guidelines to team managers at all levels.