Death toll rises to 10 as protesters clash with Pakistan police 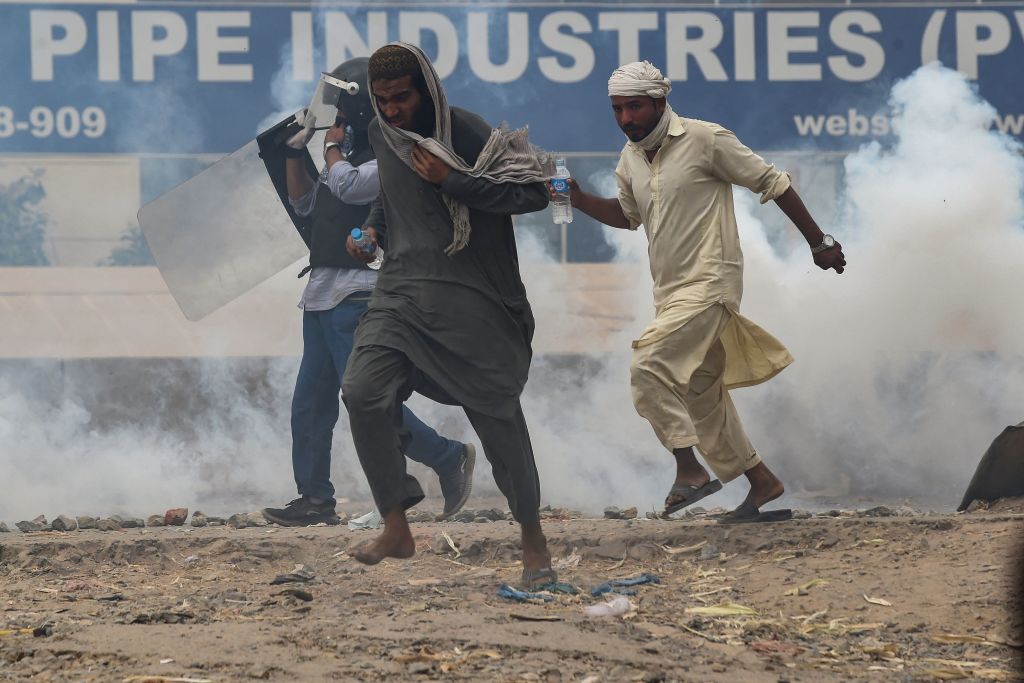 Activists of Tehreek-e-Labbaik Pakistan take cover as police use tear gas to disperse the crowd as they march towards capital Islamabad from Lahore on October 23, 2021, demanding the release of their leader Hafiz Saad Hussain Rizvi (Photo by ARIF ALI/AFP via Getty Images)

Death toll rises to 10 as protesters clash with Pakistan police

SIX people died on Saturday (23), taking the death toll to 10 in clashes between the police and radical Islamists in Lahore, as the banned Tehreek-i-Labbaik Pakistan (TLP) began a procession to Islamabad seeking the release of their party chief Saad Hussain Rizvi and expulsion of the French Ambassador over blasphemous caricatures.

Among the dead are three policemen and seven TLP workers.

The Punjab chief minister’s office confirmed the death of a policeman on Saturday (23), while the TLP claimed that five workers were killed by the police during the protest in Lahore.

A day earlier, two policemen and as many Islamists lost their lives during the violent clashes in the city.

“A total of seven TLP activists have been killed by direct firing of police and over 700 suffered injuries in Lahore so far,” TLP official Ibn-i-Ismail said. He said the condition of many injured workers was critical.

On Saturday (23), police along with Rangers had clashes with TLP workers at Rana Town, outskirts of Lahore.

“Shahdara and adjoining areas turned into battlefields. Police fired teargas shells to disperse the protesters who in return pelted the law enforcers with stones. Many TLP workers carrying clubs appeared to be fighting back when the riot police tried to disperse them,” a source in Lahore police said.

He said the Rangers remained behind the police force and did not take part directly in dispersing the protesters.

“As the protesters were carrying some bodies of those who lost their lives during the protest and insisting to bury them in Islamabad, the law enforcers were ordered from the top (senior officials) to allow them to leave Lahore,” he said.

The source said the number of TLP workers who “are allowed to leave Lahore” was around 8,000.

“The Islamists are heading to the capital on buses, cars, motorcycles, on foot and even on a couple of police vans they have snatched (from law enforcers) during the clashes,” he said.

Lahore on the second consecutive day remained cut off from the rest of the country as the law enforcement agencies placed blockade containers at all its entry and exit points.

Internet and mobile service in most areas of the city also remained suspended.

In a statement, Punjab chief minister Usman Buzdar said: “Three policemen were killed during the violent clashes with TLP protesters. We salute their sacrifice. Strict action will be taken against those involved in the killing of the cops,” he said and directed the health authorities to provide best facilities to the policemen injured in the clashes.

“Rashid and two other provincial ministers are holding talks with a delegation of the TLP in Lahore,” a Punjab government official said.

He said the talks are underway and the government is expecting a breakthrough shortly. From the TLP side, Mufti Wazir Ali, Ghulam Abbas Faizi and Mufti Umair are talking to the government.

During the clampdown, police reportedly arrested more than 2,000 TLP activists.

Those arrested have been booked under terrorism, kidnapping, blocking roads, hooliganism and other charges.

As the mainstream broadcast media did not cover the TLP protest and its clashes with police, various videos of police firing tear gas shells at the protesters, containers on different places and Islamists marching towards Islamabad were posted on social media.

As the Islamists were heading towards Faizabad Interchange Islamabad (a junction between the Islamabad Highway and interior of the capital) to stage the sit-in, the government installed containers there as well. Rawalpindi police blocked almost the entire city by placing containers on roads. Rawalpindi falls on the route to Islamabad from Lahore connected by National Highway 5.

“If any hurdles are created, the party also has a plan B to thwart any official attempts,” he had declared.

Qadri declared: “The mission of the group’s founder, the late Khadim Hussain Rizvi, will continue even if we are martyred in the march. We will not end our protest till the government implements the agreement with us” regarding severing diplomatic and economic ties with France.”

Khadim Rizvi’s son Saad Hussain Rizvi has been detained by the Punjab government since April last under the maintenance of ‘public order’ following the TLP’s protest against the caricatures of Prophet Muhammad published in France and its demand that the French ambassador be sent back and import of goods from that country banned.

Subsequently, the TLP agreed to call off protests across the country on the Pakistan Tehreek-i-Insaf government’s assurance that it would present a resolution on the expulsion of the French ambassador in the National Assembly.

However, the government had called the NA session to debate the French envoy’s expulsion and before a vote could take place on the resolution, the speaker announced the formation of a special committee to discuss the matter and asked the government and the opposition to engage with each other to develop consensus on the issue. No meeting of this special committee has been held since April.

Meanwhile, a hearing on the detention of Saad Rizvi could not be held before a federal review board on Saturday (23) as the authorities did not present him due to security reasons.

The board comprising three judges of the Supreme Court was scheduled to hear the case of the government in Islamabad through a video link from the Lahore registry. However, the government officials did not bring Rizvi to the registry due to the law and order situation in the city.