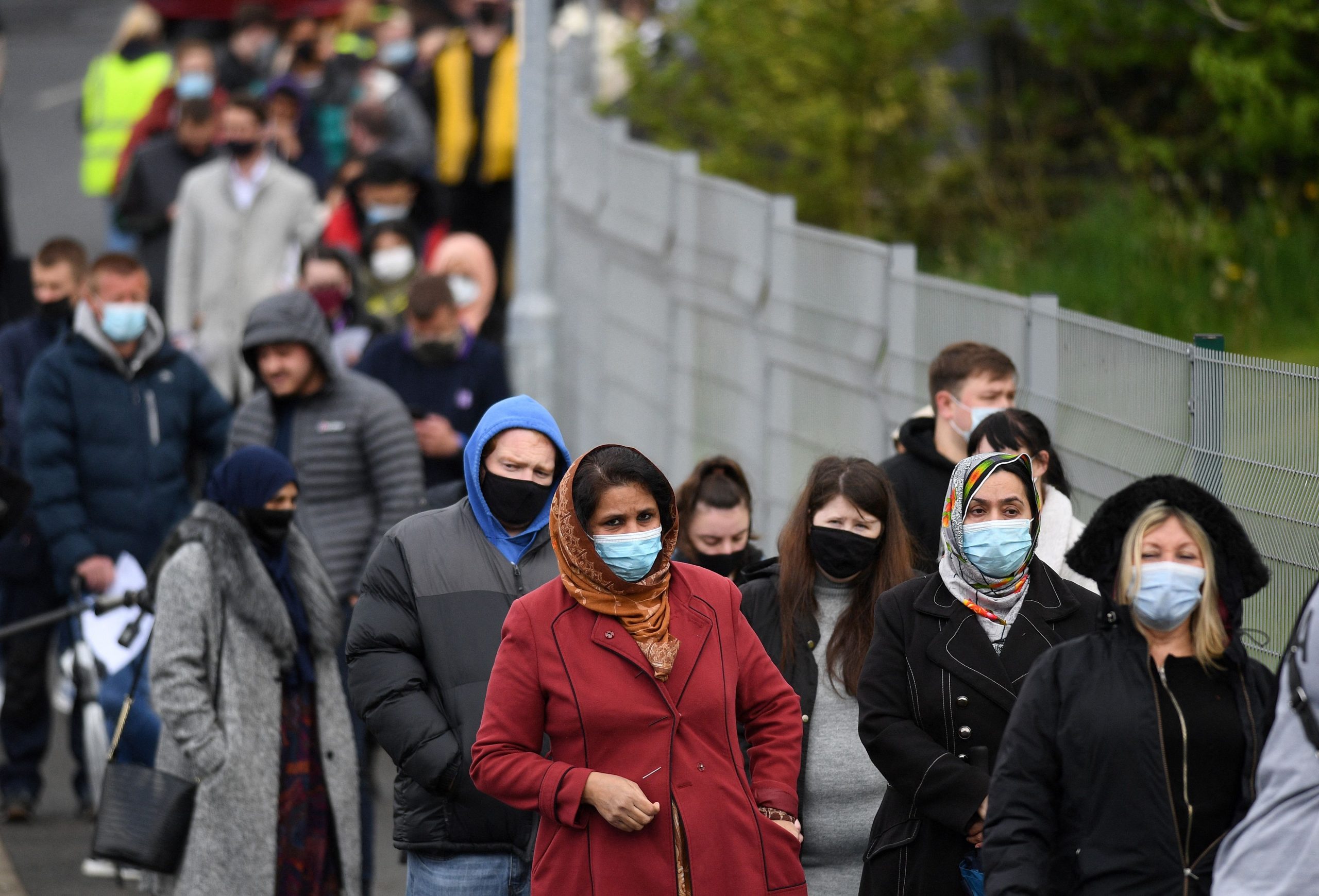 THE UK needs to remain vigilant against the Covid-19 virus, an influential doctor has warned, following concerns that the Indian variant could overwhelm the NHS and delay the easing of national restrictions next month.

Ministers have voiced concerns in recent days that the B.1.617.2 variant, first seen in India, could spark a third coronavirus wave in the UK and jeopardise plans to lift remaining lockdown rules in June.

According to figures from the Wellcome Sanger Institute on Tuesday (18), the variant was found in 127 local authorities in the week ending May 8. This was compared with 71 in the previous week.

Dr Kailash Chand, the honorary vice-president of the British Medical Association (BMA), cautioned that safety measures needed to be adhered to in light of the new variant – otherwise the healthcare system may be overwhelmed again.

“Well-established Covid behaviours, such as wearing facemasks and social distancing, will need to continue to reduce the spread of the virus as we improve first-dose vaccine coverage,” the Manchester based doctor told Eastern Eye. “We know that with any rapidly spreading variant, there will be some more severe cases requiring hospitalisation. So we need to be careful, particularly as NHS teams are trying to catch up with all the non-Covid medical backlogs.”

Although he believes the existing vaccines would offer protection from the latest variant, Dr Chand urged for more data on its impact. “We need to keep in mind, the new variants can always appear to be able to bypass the vaccine or natural immunity barriers – unless we keep readjusting our Covid-19 vaccines.”

On Monday (17), it was reported that officials were considering contingency plans for local lockdowns or a delay to reopening after June 21 in response to concern about the spread of the variant.

According to news first reported by The Times, ministers have drawn up plans modelled on the Tier 4 restrictions introduced last year. People would be advised to stay at home and non-essential shops and hospitality would be closed if the variant was not brought under control, the newspaper added.

Prime minister Boris Johnson has already warned the spread of the new variant may impact the country’s full exit from restrictions. “We’re serving notice that we do think, I think, that it certainly may cause disruption to our attempts to continue down the roadmap,” Johnson told a Downing Street briefing last week.

Health secretary Matt Hancock confirmed that early indications showed vaccines were protecting the elderly against the variant. He said there were 2,323 confirmed cases of the B.1.617.2 variant, and in the north-west town of Bolton, the majority of the 19 who had been hospitalised had not been vaccinated even though they were eligible.

“This shows the new variant is not tending to penetrate into older vaccinated groups, and it underlines again the importance of getting the jab,” Hancock told parliament on Monday.

Johnson previously confirmed the government would accelerate remaining second doses to the over-50s and those clinically vulnerable to just eight weeks after the first dose, and would prioritise first doses for those eligible who had not yet come forward.

In London, mayor Sadiq Khan estimated there were around 400 positive cases in the capital. Around 100 of those cases had a travel link to India, Khan said. “We are thoroughly contact tracing those who have tested positive to see who they have been in contact with,” he said on Monday.

The variant is thought to be on the rise in five of the capital’s boroughs – Bromley and Croydon, Ealing and Hillingdon, and Hackney. Khan confirmed he was in touch with the government about increasing the vaccination programme within those hot spot areas.

In Lancashire, experts said Blackburn with Darwen was entering its “most critical” stage in the pandemic as vaccination and testing were ramped up to halt the spread of the Indian variant. The borough’s public health director, Professor Dominic Harrison, appealed for anyone eligible for a jab to take it – even if they were under 36, which is the new lower age limit.

He said there was a “window of opportunity” to tackle the spread of the Indian variant as extra vaccines and surge testing were pumped in over the next two weeks. Harrison said he would oppose any new local restrictions in Blackburn with Darwen as it would just create a “yo-yo” effect of the borough going in and out of lockdown.

He was speaking as six new vaccination sites prepared to open this week across East Lancashire to combat the spread of the new variant. Two are in Blackburn, one in Darwen, one in Accrington and one in Burnley. Although the centres will not deliver Covid-19 jabs to everyone, they will offer immunisation to those between 18 and 36 with underlying health conditions or who live, care for or work with anyone with such conditions.

Surge PCR testing is being introduced in the three wards in Blackburn with Darwen where the Indian variant has been identified – Shear Brow and Corporation Park, Bastwell and Daisyfield and Billinge and Beardwood.

Harrison said: “The next two weeks are the most critical so far in the pandemic. This is because we now have a window of opportunity with the acceleration of vaccinations and testing. We do have high and rising rates and seven people from across Pennine Lancashire in the Royal Blackburn Hospital with Covid, so we need people to get vaccinated and tested now and to observe the ‘hands, face and space’ guidelines,”
he said.

“Although the new variant is more transmissible, we have no evidence to suggest that it can make you more ill or is more deadly. I would appeal to those who are hesitant about the jab to have it now.”

‘Only a matter of time’

In the West Midlands, health chiefs in Solihull said they were keeping a “close watch” on Covid cases after the variant was detected in the region. West Midlands-wide there have been 62 confirmed cases. It’s understood just “a couple” of these are in Solihull, although the council’s public health team has declined to give an exact figure, arguing it needed to ensure “anonymity” given “the numbers are so small”.

Councillor Karen Grinsell, deputy leader of the council, called for a “ring of steel” around hotspots in the north-west and said the situation locally was being closely monitored. “I have been in talks with the public health team, and we are really keeping a close watch,” she said. “We don’t want the virus running off again and escalating and we are very mindful of what’s going on.”

She said Solihull’s contact tracing team – which was now run directly by the council – had been in touch with anyone who needed to isolate.

Meanwhile, public health chiefs in Bedford believe the city is now back to where it was in October and November after the variant spread in recent weeks. Officials were told the majority of the 34 Indian variant cases so far identified were “not travel related” but may have been spread by social activities among friends.

Borough public health chief, Ian Brown, said: “I believe we’ve been unlucky in Bedford in that there were maybe a series of unfortunate events that led to a couple of gatherings and some super-spreading that’s now seeded into a number of our areas. We are seeing entire households infected in a short space of time.”

The situation in Bedford Hospital was described as “stable” and there has not been an increase in deaths. The council has requested that “surge testing” be carried out and more mobile test units are due to arrive in the borough.

Brown said: “The conditions are fairly ripe everywhere for this to happen in other places (and) unfortunately I suspect that much like October and November when we saw the Kent variant spread very rapidly, my suspicion is it is only a matter of time.”

In response to the further easing of restrictions which took place on Monday, the BMA called on the government to stand by its “cautious approach”. The BMA’s public health medicine committee co-chair, Dr Richard Jarvis, said: “To ensure we do not undo all the hard work and sacrifice of the previous lockdown, the government must continue to monitor the situation with extreme vigilance and have the willingness to act quickly and apply the brakes if needed to prevent the situation getting out of control for a third time.”

(With agencies and the Local Democracy Reporting Service)