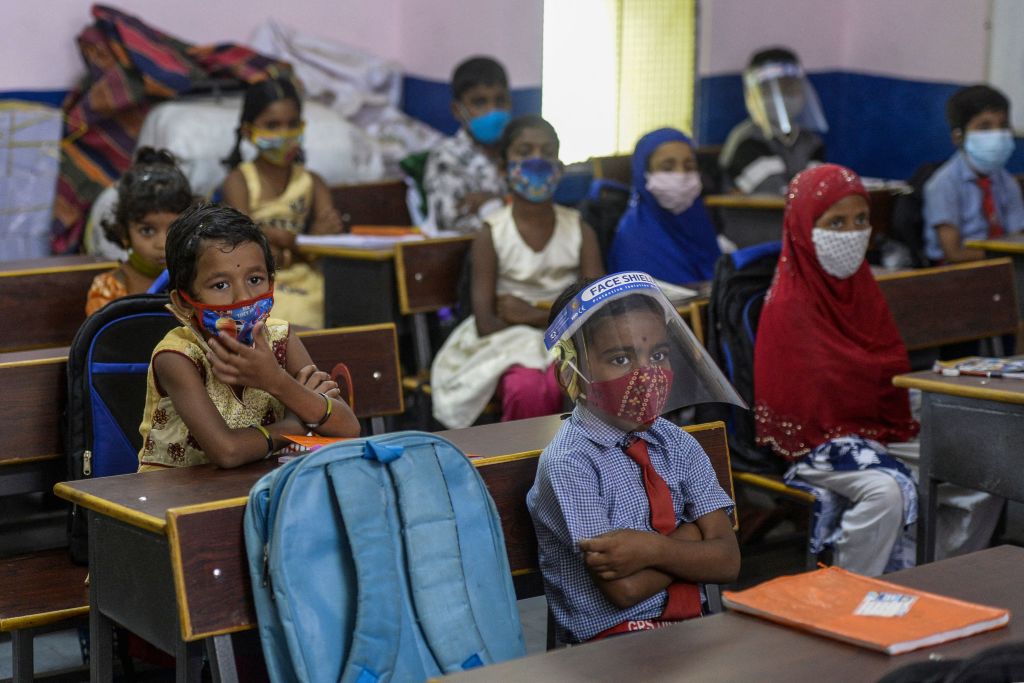 Students attend a class at a government school in Hyderabad on September 1, 2021 after the state government relaxed the Covid-19 coronavirus lockdown norms for educational institutions, allowing students to attend physical classes. (Photo by NOAH SEELAM/AFP via Getty Images)

INDIA’s school closures and its children’s lack of smartphone and internet facilities amidst the Covid-19 pandemic have worsened an educational divide, the UN cultural agency said, flagging risks to young people’s futures.

About 248 million students were hit by school closures since March last year, UNESCO said in a report, though many Indian states have started easing curbs as infections dwindled and vaccinations rose in the last two months.

Nearly 70 per cent of students lacked smartphones or other devices to access classes online, while a majority grappled with poor Internet facilities, or none, especially in rural areas, it added.

“There is an urgent need to plan to get students and their teachers back to school,” the agency said in its report on education in India issued on Tuesday.

Almost 40 per cent of parents could not afford internet costs, affecting learning, and so widening the educational gap between different parts of society, it said in the report, based on government data.

Widespread economic distress and job losses as people fled home to villages in the countryside have pushed families into poverty, worsening distress for children from such woes as malnutrition and early marriages for girls, the agency said.

Worst-hit were private schools that receive no government grants, but where many poor families aspiring for a better education send their children, as parents found themselves unable to pay fees after the reduced economic activity.

India’s economy contracted an annual 7.3 per cent in the fiscal year that ended in March 2021, in the worst recession since independence from colonial ruler Britain in 1947.

Salary cuts or job losses faced teachers in the private schools employing nearly 30 per cent of India’s total of 9.7 million, as many students were withdrawn or shifted to schools subsidised by the government.

UNESCO called for India to recognise teachers as “frontline workers” in the battle on the pandemic, and improve working conditions for them to ensure better outcomes in education.

“Quality of education is the core challenge of the next decade,” it said.