Conjoined twins separated in London after 50 hours of operations 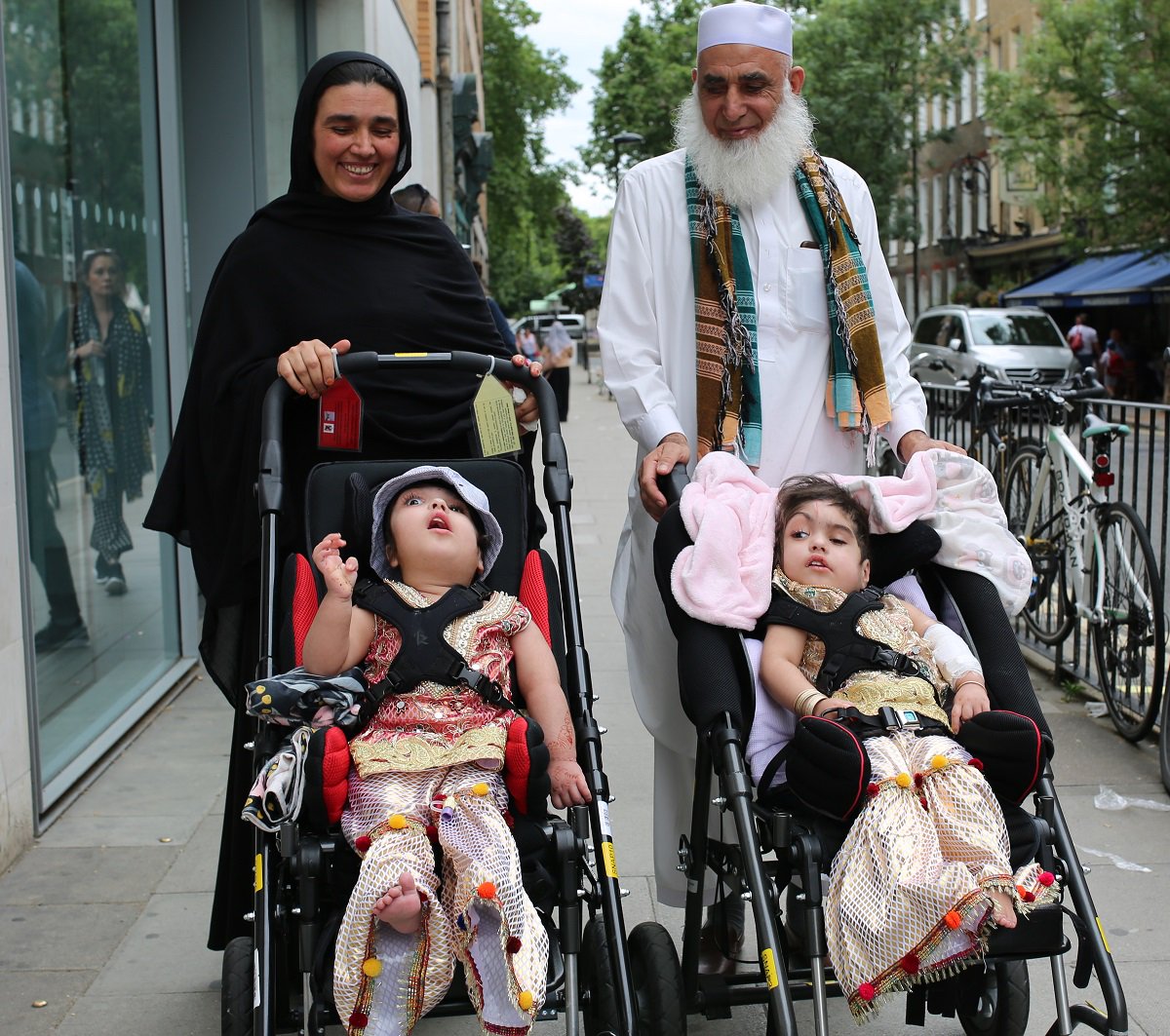 RARE conjoined twins joined at the skull have been separated after 50 hours of staggered surgeries at a London hospital, it was announced on Monday (15).

Two-year-old sisters Safa and Marwa Ullah, from Charsadda in Pakistan, underwent three major operations between October 2018 and February this year to separate their heads at Great Ormond Street Hospital (GOSH).

The twins had their first operation when they were just 19 months old, GOSH said.

To prepare for the surgeries, experts created a replica of the girls’ anatomies using virtual reality, helping them visualise the positioning of their brains and blood vessels.

They also used 3-D printing to create plastic models of the structures that could be used for practice.

The surgeries were not without complications.

The first surgery saw doctors separating the girls’ blood vessels and then inserting a piece of plastic into their heads to keep the brains and blood vessels apart.

During a follow-up surgery, the girls started to bleed after clots formed in Safa’s neck veins and she began to shunt blood to her twin.

Doctors feared they would lose Marwa during the operation after her heart rate fell. Following complications, doctors gave her a key vein that the twins shared. But the loss of the vein resulted in Safa experiencing a stroke within the next 12 hours.

The future looks bright for both Safa and Marwa. After their final surgery, they began their recuperation at @GreatOrmondSt – here they are enjoying ‘Twinkle, Twinkle, Little Star’ during a playful physio session! https://t.co/aKrOCMGu3q ?? pic.twitter.com/fk3jKbpukr

The operation was led by neurosurgeon Noor Ul Owase Jeelani and craniofacial surgeon Prof David Dunaway. The operations added up to more than 50 hours of surgery time and involved 100 members of staff from GOSH.

They said in a statement: “We are delighted we have been able to help Safa and Marwa and their family. It has been a long and complex journey for them … Their faith and determination have been so important in getting them through the challenges they have faced. We are incredibly proud of them.

“We are also incredibly proud of the GOSH team responsible for their treatment and care over the past 10 months. GOSH really is one of the few hospitals in the world with the infrastructure and expertise to carry out a separation like this successfully.”

Born on January 7, 2017 at Hayatabad hospital in Peshawar, the twins were delivered through a C-section and it was only after five days that their mother – Zainab Bibi – could meet them.

The girls’ father died of a heart attack while their mother was pregnant with them.

“They were very beautiful and they had nice hair with white skin. I didn’t even think about the fact they were joined. They are God-given,” Zainab was quoted as saying by the BBC.

When the family first decided to separate the twins, a military hospital in Pakistan offered to perform the surgery. But they warned that only one of the twins would survive.

Zainab was unwilling to take that risk and started exploring other options.

We’ve an incredible story to share with you: conjoined twins Safa and Marwa have been successfully separated – the first such procedure at @GreatOrmondSt since 2011! Discover their extraordinary story. https://t.co/aKrOCMGu3q ?? pic.twitter.com/zePGMMrdIt

The family was then put in touch with Dr Jeelani, a paediatric neurosurgeon at GOSH, when the twins were three months old. After analysing the twins’ scans, the surgeon was persuaded that they could be safely separated.

They were soon brought to the UK and their surgery was paid for by Pakistani businessman Murtaza Lakhani.

Lakhani said he wanted to help the twins as soon as he heard their story from Jeelani, “The twins are from Pakistan which is from where I am from originally. However, the true reason for me helping them was because it was an operation that was going to save the lives of two children. For me it was an easy decision, it’s how you build the future,” he told the BBC.

The twins were discharged on July 1 and have been undergoing daily physiotherapy as part of their rehabilitation programme. They have been moved to a London address with their mother, grandfather and uncle.