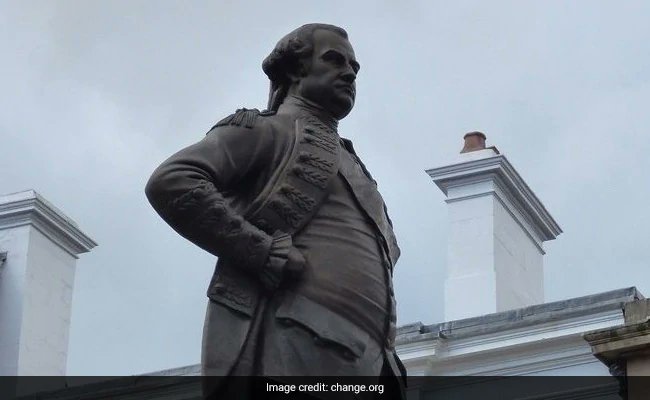 THE statue of Robert Clive will remain on its plinth in Shrewsbury town centre after Shropshire Councillors voted to take no action over calls for its removal.

More than 23,000 people signed two petitions asking for Clive to be replaced, arguing that he was not a figure deserving of such commemoration.

But Shropshire Councillors rejected the idea at a meeting on Thursday (16) in a move that has been described as “tone deaf” by campaigners.
A debate on the statue’s future ended with 28 councillors voting for a proposal by deputy leader Councillor Steve Charmley for “no further action”.

There were 17 votes against one abstention.

Councillor Julian Dean said he had only recently become aware of the background of Robert Clive, known as Clive of India, and his role in the East India Company which established British colonial control of India and large parts of south east Asia through looting, theft and crippling taxes.

Councillor Dean said: “Now that this is understood by those of us with responsibility, to suggest that the statue should stay is effectively saying that we are comfortable celebrating this man’s life as a corrupt mercenary.

“More than that, it’s saying we are not bothered by the offence it causes and people should just grin and bear it.”

He added that in other aspects of society it was accepted that “an injury to one is an injury to all”.

“On that basis, I don’t think there is any way we can justify continuing to have that statue here.”

Council leader Peter Nutting said the statue should remain but that more work should be done on education people about Clive’s life so that they could make up their own minds.

He suggested an information board be put up either next to the statue or in Shrewsbury Museum, adding that there was also a statue of Clive in Kolkata that the Indian people were “proud of” and did not want to be removed.

Councillor Charmley said the removal of the statue would not be straight forward due to its Grade II listing.

A rival petition set up in support of the statue was signed by 9,000 people but was not submitted to the council in time to be debated.
Following the vote, David Parton, who started one of the two petitions for the statue’s removal, said: “We are disappointed by Shropshire Council’s tone-deaf decision to retain the statue of the mass-murderer Robert Clive in The Square, Shrewsbury.

“It is vital we learn from our past, but we should not have to live in it.
“Despite more than 20,000 people calling for this statue to be moved to a museum, Council members chose to ignore the concerns of minority communities and revel in Clive’s murderous legacy.

“This vote was just the start of the movement to remove Clive’s statue. Like with Colston and Rhodes, Clive will fall. Today’s decision has simply delayed the inevitable.”

A motion was also tabled at the meeting by Councillor Nat Green, calling for a referendum to let the people of Shropshire decide the fate of the statue.

Councillor Andy Boddington, presenting the motion on Councillor Green’s behalf, said Shropshire Council was “not representative of the broader community” on the matter.

The motion failed to gain the necessary support with 10 votes for and 34 against, with two abstentions.