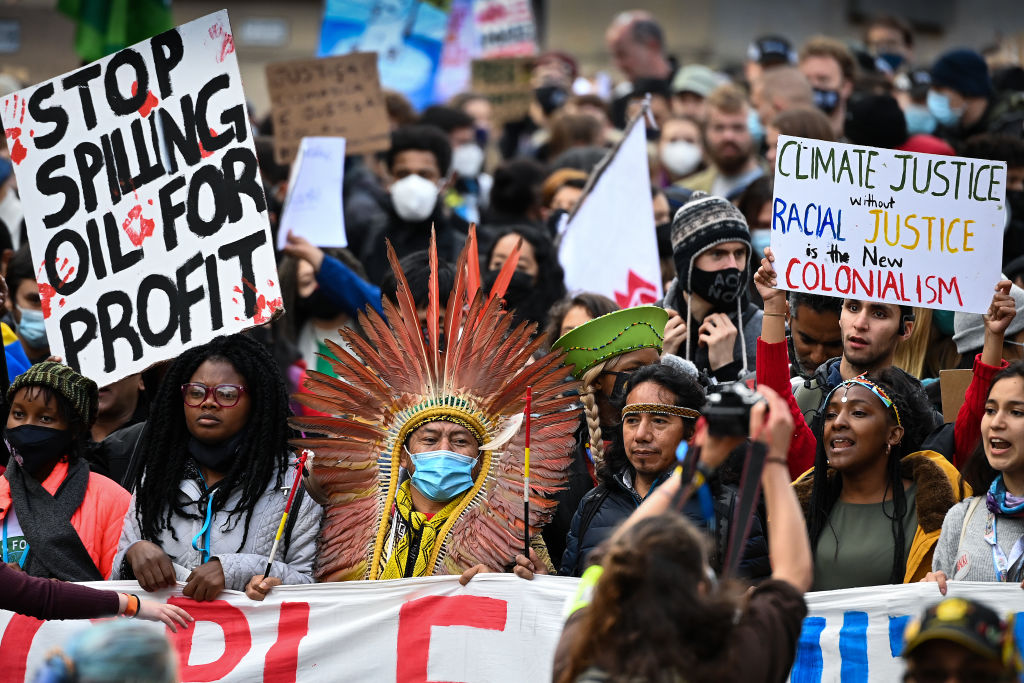 AS WORLD leaders met for COP26 in Glasgow, we were reminded of the sobering fact that we are currently in a climate emergency.

Climate activism is vital in the fight for social justice on a global level. The climate crisis highlights the divisions between the West and the global south.

Despite historically contributing the least to climate change, those in the global south are suffering the most. Therefore, intersectional activism is so vital.

While I welcome the fact that the EU, US, China, and India pledged to achieve a target of net-zero emissions over the coming decades – the US and EU by 2050, China by 2060 and India by 2070 – the truth is we need to halve carbon emissions now if we are to keep global temperatures down. We do not have time for climate delay.

These net-zero pledges are vital in ensuring that the global south do not continue to feel the dramatic and devastating effects of climate change – as is the pledge to end deforestation by 2030.

Instead of empty promises from world leaders, we must be listening to those who will suffer the most from climate breakdown – the youth. This cannot just be about political ambition; it is vital for our survival. We need to monitor changes in insect behaviour and be at one with nature.

We must pay more attention to the activism done by MAPA – representing the world’s ‘Most Affected People and Areas’ – and acknowledge that we are harming those across the globe. We are all interconnected globally.

Edwin Moses Namakanga, 27, from Uganda; Maria Reyes, 19, from Puebla City, Mexico; Farzana Faruk Jhumu, 22, from Dhaka, Bangladesh; and Jakapita Faith Kandanga, 24 from Namibia – these young people live miles apart, but are all connected as they live on the frontline of the climate crisis.

They made near-impossible journeys to Glasgow to influence COP26. It was a hassle getting visas and working out Covid-19 laws when the countries they travelled from were not offering young people vaccines. But they were there.

Unlike their European comrades in the youth climate strike movement (also known as Fridays for Future), their knowledge about climate change does
not come from schoolbooks or social media. It comes from their backyards, their very real, lived experiences. And it is not some future concern – it is
happening right now. They don’t have the privilege of blocking roads as many of their roads have already been washed away.

In Bangladesh, climate change has resulted in yearly cyclones and flooding, which displaces millions and kills thousands. Because of the flooding, seawater has ruined the soil, meaning that those whose livelihoods depend on the agricultural industry have no way of earning money. Climate breakdown is causing economic poverty.

In Uganda, too, there is flooding. In 2020, the Kasese floods displaced hundreds and the prolonged draught in the north of the country has led to crop failure.

Because of climate change, people are forced to migrate and cannot meet basic needs. Water scarcity in Namibia means they suffer from draught. As a country that depends on farming and agriculture, children must drop out of school as their families can no longer afford to send them there.

These are only a few stories. Poverty is a political decision – if global politicians decided on an intersectional approach to end poverty, it will happen. We can tackle both climate breakdown and poverty.

Climate change has not only killed those in the global south, it is also responsible for killing children in London. Ella Adoo-Kissi-Debrah died because of pollution. Her mother, Rosamund Adoo-Kissi-Debrah, founder of the Ella Roberta Family Foundation and World Health Organization advocate for health and clean air, said: “The coroner’s inquest into my daughter’s death made clear that all levels of government must work to get dirty cars off the road, to protect human health. Children suffer the most from air pollution, as their lungs are still developing up to the age of 10.”

Labour in power cares about the climate, as shown by City Hall’s (London mayor’s office) steps to reduce carbon emissions.

The Conservative government, however, are hypocritical. They make empty promises about climate ambitions, but fail to act, resulting in a continuation of global injustice and irreversible climate damage.

The virtual absence of the climate crisis from chancellor Rishi Sunak’s budget was astounding. Halving taxes on domestic flights, rather than investing money into far less polluting train infrastructure, was shocking. Only £1.5 billion was invested into public transport in the UK’s city region, when the Green Alliance estimates that £7.6bn a year is needed. It is appalling.

This isn’t a game. How can we trust this government to act on the climate emergency when prime minister Boris Johnson took a private jet back to London from Glasgow to go on a dinner date with a climate-sceptic friend? And he is planning to cut funding to London transport and has failed to invest in rail infrastructure in the north of England.

It is time to unite in the UK and globally – climate activism is political activism. I hope especially young people will get involved. It’s time we started working together to protect our planet.