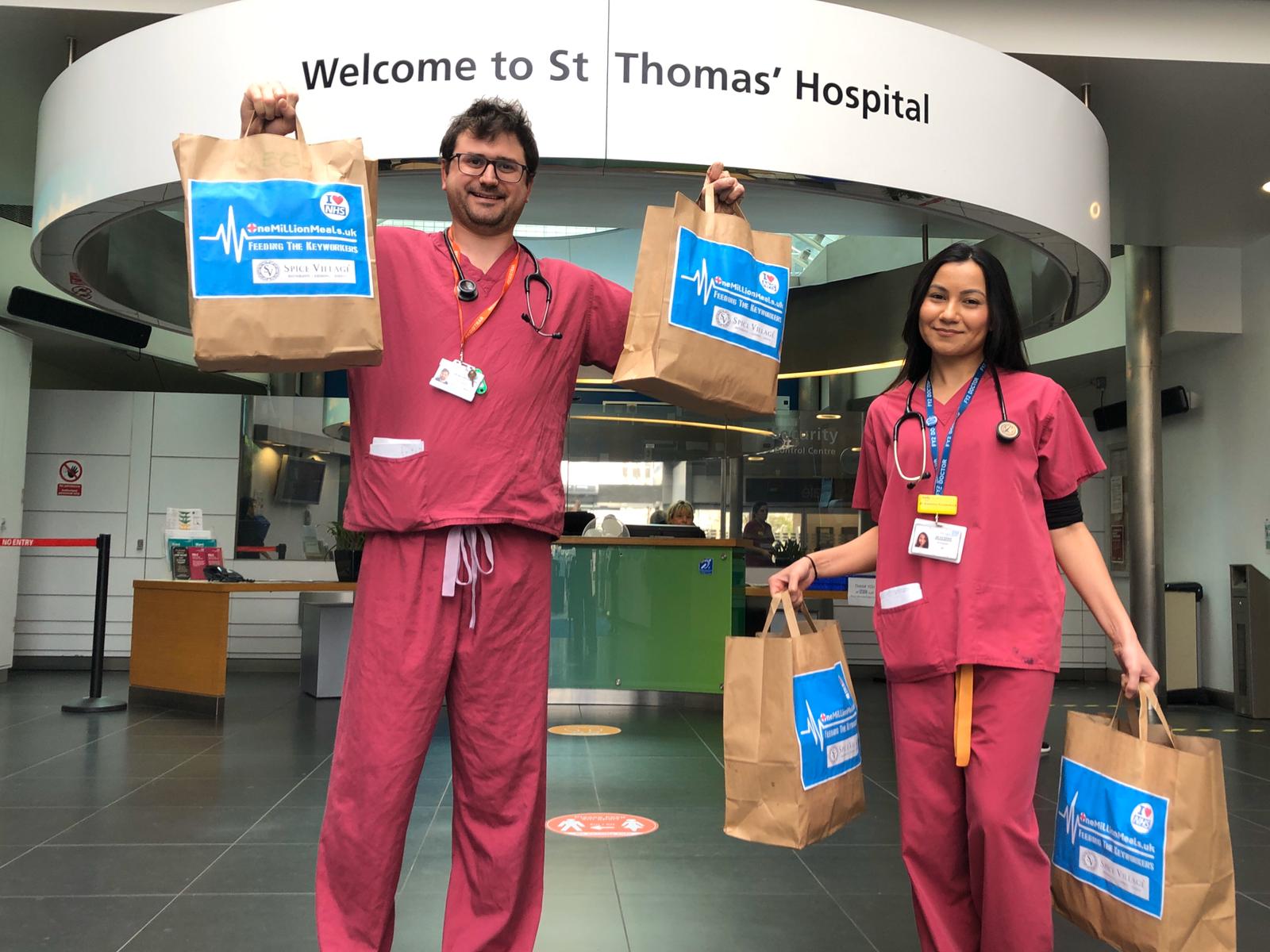 Produced in partnership with UK Government

SHOPS, pubs, restaurants and other businesses stayed shut during the UK Government-imposed lockdown to contain the spread of coronavirus earlier this year.

However, some of them saw an opportunity to show their appreciation for key workers who kept the country going during those weeks and to also help those less fortunate than themselves.

Suleman Raza, CEO of wedding venue Grand Sapphire in London, asked himself what he could do to help at the peak of the pandemic outbreak. It led to him launching the “One Million Meals” campaign at the end of March.

It is a non-profit initiative to provide meals to NHS and frontline healthcare staff, vulnerable people, key workers, the homeless as well as food banks, which saw a huge rise in demand.

“The aim was to provide support to vulnerable people and all those who have been exposed to substantial risks during the pandemic,” Raza said.

Initially, about 10 members of his staff prepared meals at the kitchen of his restaurant in Croydon, south London. Later, as Raza began to collaborate with other restaurants and food brands
up and down the UK, the campaign grew to include partners in England, Scotland and Wales.

“We served more than 47 hospitals across the UK, as well as foodbanks, and fed the homeless,”

Raza said. More than 80,000 meals and nutritious drinks have been provided till date.

Raza ensured that kitchen and delivery staff followed strict safety procedures while meals were prepared and delivered. Hand sanitisers were installed in the kitchen, staff went online to learn how to stop the spread of coronavirus. They were also provided masks and gloves and instructed not to wear their uniform outside the kitchen.

Delivery drivers collected the food from designated points and they were not allowed to step into the kitchen. They also wore protective clothing so as to not expose themselves to any risk when they dropped off the parcels at hospitals.

“Going to hospital was probably the biggest challenge we had,” Raza said.

Delivery was arranged at a specific time and place and staff at the hospital were informed when the drivers were 10 minutes away. At the start of the campaign, the meals were either biryani, salad or rice with butter chicken.

Later, as more restaurants joined the project, there were more options, such as Italian, Lebanese, Moroccan, in addition to salads, sandwiches and steaks.

Raza said, “Other organisations were doing similar work, but we were getting feedback that our meals were popular as they were fresh. Even if we were going to the same hospital seven days a week, we tried to offer them different meals every day. Staff were excited and also thankful for our meals.”

Raza himself made trips to hospitals and said the response was “very encouraging and heartwarming”.

“They praised our efforts, especially when healthcare staff didn’t have time to shop for food as they were busy saving precious lives.

“They were thankful and were looking forward to our meals.

“It felt absolutely great to be able to support our local community and the NHS frontline staff. It was important to support all those affected due to Covid-19,” he said.

Following the success of his project, Raza revealed he has started thinking about pursuing this in the long term, in order to support vulnerable people and those who are homeless.

“Our journey will continue, it won’t stop,” he said. Raza is heading a food industry-led initiative to eliminate homelessness.

He said the aim is to not only support homeless people by providing them meals or financial support, but to also enable them to become “significant contributors to society”.

When his restaurant reopens, customers will be encouraged to contribute £1 or £2 in their bills so as to pay towards the initiative.

“We are planning to launch this in August; so the journey of one million meals will continue,” he said.

Initially the project was funded by Raza himself, using his own resources, including his staff. Later, he built partnerships with food brands, other restaurants as well as corporate firms, who helped with funding.

Among those were Santander Bank, the London School of Economics and Political Science, Yakult and Innocent Drinks.

Raza said more than 10 of his employees worked on a voluntary basis, and afterward, 81 volunteers helped throughout the campaign. “We had a website where volunteers were asked to sign up if they wanted to help and we were overwhelmed by the response,” he said.

In order to get the project off the ground, Raza and his team initially worked 16-18 hours a day as everyone was hands on.

“The project became much bigger than we thought,” he said, adding that he is currently still working more than 12-14 hours a day to put things in place.

As for the wedding venue, Raza said the future is uncertain, but he hopes to be back in business later in autumn.

The businessman arrived in the UK in 1999 from Pakistan as a young man. He started working as a chef in a restaurant where he learned how to cook before opening his own in 2004.

Another business that also helped frontline staff during the pandemic is popular chain Dishoom, which has restaurants in London, Manchester and Edinburgh.

It signed up to the FeedNHS initiative, a non-profit campaign founded by the married film and television actors Damian Lewis and Helen McCrory, TV personality and comedic actor Matt Lucas, and John Vincent of Leon restaurants. The aim was to raise money to feed NHS workers.

Dishoom founder Shamil Thakrar said, “We wanted to do something; we wanted to help out. Our restaurants are shut. It’s a national effort; it’s a hard time for everyone. How could we help? We knew there was a group of people coming together to help the NHS so we decided to get involved in that. “We thought it was a great idea and we heard Damian Lewis and Helen McRory talk about it. We think it’s a really important thing to do for restaurants to be pulling together at this time.”

At Dishoom’s Kensington branch, the kitchen was a hub of activity as chefs made chicken biryani and a vegetarian option, jackfruit biryani. Served with raita, a yogurt-based side dish, biryani is what many regard as nourishing, comfort food, and best of all, it can be eaten straight out of the container it is packed in.

These tasty treats were delivered (with couriers following UK Government safety guidelines) to staff at St Mary’s Hospital in Paddington. More than 2,500 meals were provided in the first few days since Dishoom got on board with the charitable initiative.

Thakrar’s father Rashmi Thakrar, who passed away in 2016, was among the thousands of Asians who arrived in the UK from Uganda in in the 1970s, and set up Tilda, which is synonymous with high quality Basmati rice.

Thakrar paid tribute to his father, saying, “I’m sure he is glad we’re doing it. It’s certainly true in my family there is a tradition of service. And we like to continue with that work at Dishoom.”