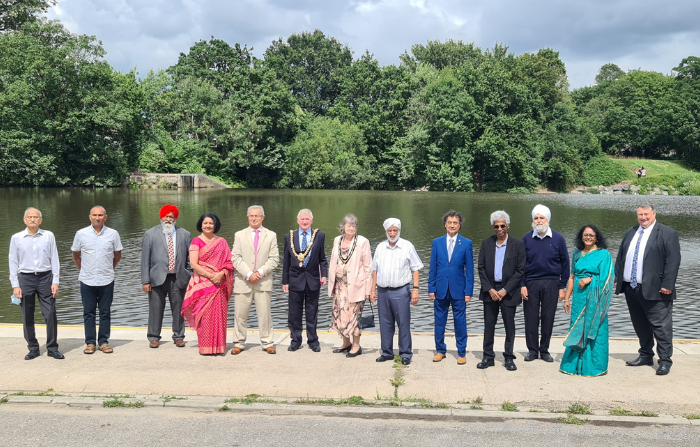 A NEWLY approved site where the Hindu and Sikh communities of Britain can scatter the ashes of their loved ones after funeral rites have become operational by the River Taff in Wales following many years of campaign.

On Saturday (31), the inauguration of the site took place with offering of Hindu prayers by Radhika Kadaba, Sikh Ardaas by Verinder Bhogal and a welcome speech by Vimla Patel, chair of the Antim Sanskar Group Wales (ASGW).

The ASGW, which was set up in 2012, worked towards raising funds since the Llandaff Rowing Club in Cardiff got the nod for the site and marked its formal opening over the weekend.

The site located at Llandaff Rowing Club on Bridge Road, Llandaff, Cardiff, is a first of its kind facility in Wales which is officially supported by Cardiff Council and will serve both the communities. However, anybody who follows the booking procedures can use this facility.

“Cardiff Council funded the construction and the Llandaff Rowing Club and members of the Hindu and Sikh communities of South Wales contributed financially to meet the final costs,” said Patel.

“After many years of hard work we, at last, have an established and sanctified area where families can come and disperse the funeral ashes of their loved ones,” she said.

The issue was first brought to the attention of Cardiff Council by Jaswant Singh, a county councillor, in 1999. Fourteen years later, the search for a suitable location was given a new boost by Channi Kaler of the ASGW, who contacted many Hindu and Sikh institutions to find a solution to the problem.

Kaler, a Tanzanian-born Sikh, began searching for a site after his sister almost slipped into a river while trying to scatter his father’s ashes at Pontsarn, Merthyr Tydfil, in 2012.

“There are more than three generations of Hindus and Sikhs settled in Wales. The first generation of our community tended to take the ashes back to their motherland. However, the later generations, either born or have lived most of their lives here, prefer to scatter the ashes of their loved ones in Wales, with respect and dignity,” Patel said.

The site was sanctified by performing bhumi puja and Ardaas on July 22, 2020. This is believed would purify the land and pave way for a smooth operation of the site.

Patel also said that a booklet was launched on the occasion containing necessary guidance and information to support the bereaved. The booklet has been designed by Rajendra and Nirmala Pisavadia.

“It has taken some time to get the platform in place due to engineering issues, as well as problems caused by the pandemic, but we now have a permanent and managed location that will be used by the current and future generations of the Sikh and Hindu communities,” a spokesperson of Cardiff Council said.

Raj Aggarwal, the honourable consul for India in Wales, said, “I must congratulate the Antim Sanskar Group for their dedication and huge efforts in establishing this valuable site at the Llandaff Rowing Club on River Taff in Cardiff. It is a proud day for the community and Wales as this superb facility will support the final necessary ceremonial rites for loved ones with safety and dignity.”

The Hindu Forum of Britain (HFB), an umbrella group for British Hindus, has also worked on this issue over the years.

“As a part of the ‘Cremation and Crematoria’ in liaison with the UK government and the Hindu community, the Hindu Forum of Britain has campaigned to improve such facilities and had a few new sites registered with the Environmental Agency for dispersion of ashes,” HFB president Trupti Patel said.