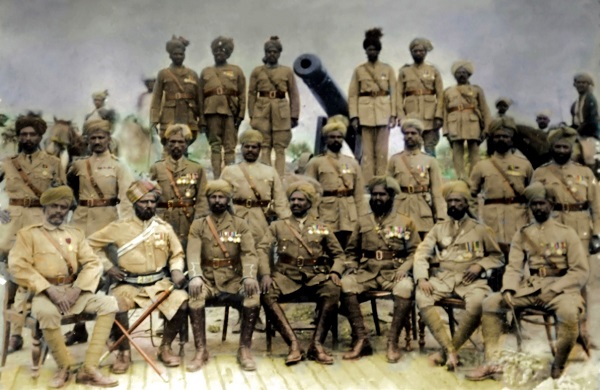 The Dulmial First World War veterans in 1925.
Follow Us

THE crucial contribution and valour of Indian soldiers in the two world wars are rec­ognised in a book the Royal British Legion is bringing out to mark its 100th anni­versary on May 15.

Its author, Julie Summers, told Eastern Eye she had been inspired as a little girl by her maternal grandfather, Lt Col Philip Toosey, who had served alongside Gurkhas in the Sec­ond World War and told her: “Well, we never would have won the First World War with­out the Gurkhas.”

“And so, I’ve grown up always knowing there was a much bigger picture to the British Army than just what white history tells us, basically,” she added.

The Indian contribution had been “written out” in the 1950s, noted Summers, but her book cannot be faulted from the British Asian point of view.

We Are The Legion: The Royal British Legion at 100, which is coming out on May 6, examines the battle of Kohima in 1944, when British and Indian soldiers eventually prevailed despite being heavi­ly outnumbered by the Japanese.

Summers referred to the ‘Kohima Epi­taph’ – “When you go home, tell them of us and say, for your tomorrow, we gave our today” – and commented: “I’ve al­ways been struck specifically about the Second World War, but also to some ex­tent about the First World War, that when you get men together and they’re fighting, they are all fighting against a common enemy. And they lose, not to 100 per cent extent, but to a very great extent, any no­tion of race and ethnicity. They are much more interested in what they can do to support each other.”

The book also mentions the Memorial Gates in London which commemorate “five million men and women from the Indian subcontinent (Bangladesh, India, Nepal, Pakistan and Sri Lanka), Africa and the Caribbean”.

As for the Khadi Poppy, first proposed in 2017 by Lord Jitesh Gadhia, she com­mended it as “an absolutely brilliant idea” and expressed surprise that it will be dropped this year. “I thought it was abso­lutely fantastic to launch it with the Eng­lish and Indian cricket captains (Joe Root and Virat Kohli, respectively).”

Summers believes Lord Gadhia had set an example: “It is his fervent wish that young Indians and Asians in Britain own their story. They are proud of the story as they should be – it’s remarkable. But until they start telling the story and bringing out the names of their ancestors and their deeds, it isn’t going to chime. It has to come from that community.”

She has written about the 12-pounder canon gifted to the village of Dulmial, now in Punjab in Pakistan, as an expres­sion of gratitude for the high proportion of its men who had served the British ar­my in several wars.

The author had her attention drawn to “the Dulmial gun” by Dr Irfan Malik, a GP in Nottingham, who discovered one of his ancestors, Captain Ghulam Mohammad Malik, had asked his grateful British supe­riors for the cannon as a reward instead of money or land.

“I could have written a whole book on this village,” enthused Summers. “The vil­lage had a very proud link to the British Army and had fought with the British from the early 19th century onwards.”

Summers, the author of 14 books, in­cluding British and Commonwealth War Cemeteries, explained: “I’m a Second World War historian. But I’m not a mili­tary historian. I’m much more interested in the social history behind the war. So, what happened to the women particular­ly, but also what happened when the men came home.”

She wanted to dispel the notion that Britain had won two world wars on its own: “One of the things that makes me so very, very upset are the white (Nigel) Far­age Brexit supporters, who describe how ‘plucky little Britain’ stood on the edge of Europe and valiantly beat off those wretched Nazis.

“And it’s utter rubbish. We had this huge slew of volunteers from India, from the Caribbean, from Africa. It wasn’t till 1941 we had the Americans: before that we had all the other support. None of it could have been done on our own, it just wouldn’t have happened.”

The book includes an observation from Field Marshal Sir Claude Auchinleck, who commanded the Indian forces in the Middle East. He said later that the British “couldn’t have come through both wars if they hadn’t had the Indian Army”.

Summers hopes her book will serve as a unifying influence. “I very much hope that people will read it and will see that the Legion has a much bigger view than the narrow field that people tend to asso­ciate with it.”

British Asians will obviously be disap­pointed if the Legion drops the Khadi Poppy because it connected them to the organisation for the first time. Lord Ga­dhia said: “It’s great to see its recognition in the book. I am hopeful we can keep the flame alive in future years.

“When we first launched the Khadi Poppy in 2018 to mark the centenary of the Armistice of World War I, it was al­ways intended as a limited edition. Given the strong positive reaction it received, the Royal British Legion extended the production for a further two years.

“I understand that production will be paused this year, especially as the Royal British Legion needs to stabilise its opera­tions after a difficult year during the pan­demic. However, I hope the door will be kept open to producing the Khadi Poppy in future years, given its deep symbolism recognising the extraordinary contribu­tion made by undivided India during both World Wars.”

Catherine Davies, the Legion’s head of remembrance, said: “In our centenary year, the Royal British Legion continues to recognise all those who served and sacrificed in defence of our freedom from the UK and across the Commonwealth.

“The book highlights the Legion’s proud heritage and the contribution of thou­sands of men and women from across the Commonwealth who have come to Brit­ain’s aid over the last 100 years.

“During the First and Second World Wars, a collaboration of ethnicities, reli­gions, languages and cultures were unit­ed against a common enemy. Not only did they play a crucial role in these con­flicts, they were also instrumental in shaping modern Britain and creating the richly diverse society we live in today.”

We Are The Legion: The Royal British Legion at 100 by Julie Summers is pub­lished by Profile Books; £18.99.