Bollywood is perhaps the biggest influence on south Asian weddings around the world and for many, such has been the impact that it has overtaken age-old traditions.

From the couples and families to guests and wedding planners, many are using their favourite films for inspiration to add a more contemporary edge to proceedings.

This has also spilled over into non-Asian weddings getting inspired the colourful energy of Hindi films to add that extra element of fun.

With that in mind, Eastern Eye took a closer look at weddings to find the top 10 Bollywood influences.

10. Family performance: One Bollywood-inspired trend that has gone unnoticed is the family performance. Today, many family members will get together to perform a heartwarming dance at the weddings and the roots of this are firmly in Bollywood when all ages are celebrating together in big musical numbers like Maahi Ve from the movie Kal Ho Naa Ho.

9. Popularising existing trends: Many trends like hiding the groom’s shoes had been pushed into the background, but then found a new lease of life when they appeared in movies. One of the reasons why weddings do seem like they go on forever is that Bollywood magnified all the elements, which subsequently means each section of the wedding got longer, from the mehndi to the receptions.

8. Locations: Films songs being shot at exotic locations around the world along with popular Bollywood couples like Ranveer Singh and Deepika Padukone having destination weddings have inspired couples to go abroad. Whether it is destination weddings, honeymoon or just being photographed in the same place, couples are clocking
up the air miles because of Bollywood. One recent example was a sudden rush to Iceland after Dilwale song Gerua was shot at the beautiful locations there.

7. Outfits: Choosing the perfect outfit is a huge challenge for those getting married and one of the first places prospective brides look is Bollywood. The regal designs worn by leading ladies have inspired many women to get bridal outfits specially made to resemble ones seen on Hindi film heroines. Bollywood even illustrated this trend in Humpty Sharma Ki Dulhania, because Alia Bhatt’s character is determined to get an expensive dress designed by celebrity designer Manisha Malhotra.

6. Dance: Bollywood musicals have a heavy dance influence and that has twirled its way into weddings. Many popular dance numbers have been replicated in marriage ceremonies, including at the sangeet and wedding receptions. Many couples and guests perform their favourite movie dances, and such is the popularity that many dances performed by everyday people have clocked up millions of views on YouTube. Nick Jonas even got into the Bollywood dance spirit at his own wedding to Priyanka Chopra. 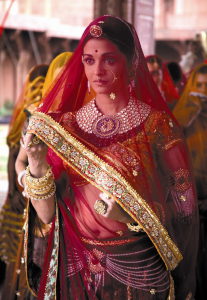 5. The look: It isn’t just the outfits that are inspired by Indian cinema, many brides will replicate the makeup, hair and jewellery they see on their favourite heroines. One of the most popular inspirations on real-life brides and makeup artists has been the timeless look from Aishwarya Rai Bachchan in historical epic Jodhaa Akbar. This shows that every bride wants to look like a queen on their wedding day.

4. Love marriages: More couples than ever have set aside arranged marriages and are choosing the more romantic option when selecting their life partner. Love marriages have been pretty much the staple of most Bollywood films and one that had the biggest impact was undoubtedly the record-breaking romance Dilwale Dulhania Le Jayenge.

3. Opulence: If you, as a parent, are reading this and wondering why the bill for a wedding is sky-high nowadays, then Bollywood can shoulder a lot of the blame. Pretty much all weddings on the big screen are extremely lavish and many couples want to replicate that in real life. That is perhaps one of the reasons why the south Asian wedding industry is a multi-billion dollar business and why couples often request “no boxed gifts”, which translates into, “give us money, we spent a bomb on our big day”.

2. Hum Aapke Hain Koun: The record-breaking film has influenced most south Asian weddings since it was released. Opulence, music, dance, magnifying tradition, family fun, romance, influential outfits, finding love and more, the Hum Aapke Hain Koun effect can be seen in weddings all over the world, including in movies being made about the subject.

1. Music: By far, the biggest Bollywood influence on real-life weddings is the countless songs the industry has produced. Whether it is a grand entrance song, first dance, sangeet ceremony performances, the sad departure numbers, hired performers or the DJ setlist, Hindi film music can be seen throughout a south Asian wedding. It is the music that has most crossed over into non-Asian weddings, with many couples of all cultures using the celebratory songs to light up their big day.

‘She came with a pundit & married my…,” Ranbir Kapoor shares an interesting incident about…

30 years of Shah Rukh Khan in cinema: 7 times he floored us…

India one of largest opiate markets in terms of users,…

IAF receives over 94,000 applications under Agnipath scheme in four…