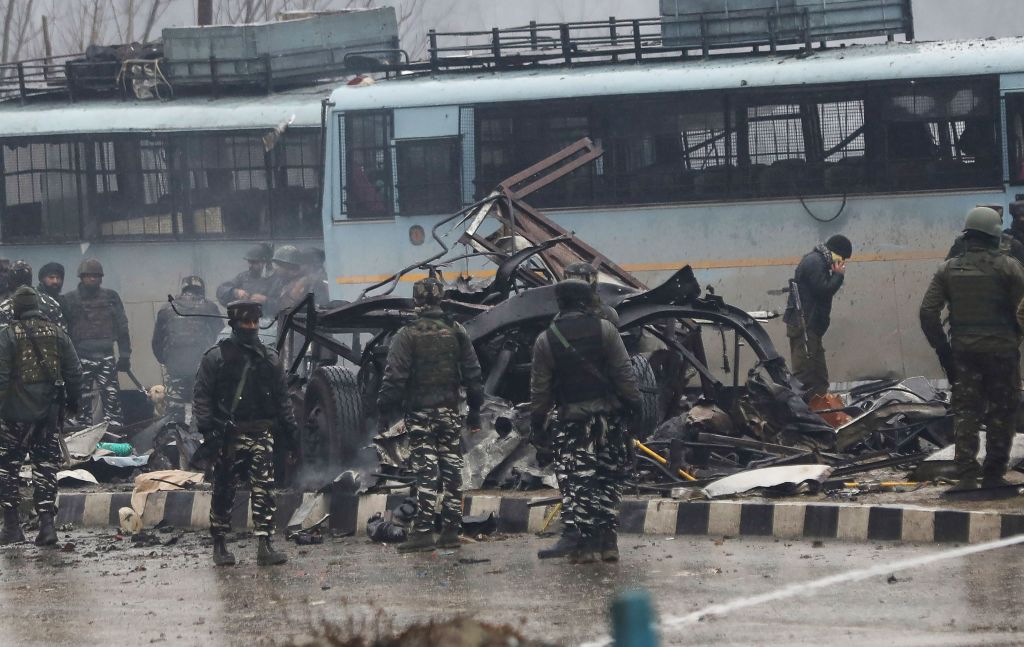 Indian security forces inspect the remains of a vehicle following an attack on a paramilitary Central Reserve Police Force (CRPF) convoy that killed at least 16 troopers and injured several others near Awantipur town in the Lethpora area of Kashmir about 30 km south of Srinagar on February 14, 2019. Both India and Pakistan have long suffered from terrorism. (Photo by STR/AFP via Getty Images)

PAKISTAN is the biggest perpetrator and supporter of terrorism while the country masquerades as its victim, India said at the UN.

Islamabad should also stop “cleansing its own minorities including Hindus, Christians, Sikhs, and Buddhists”, India added.

Emphasising the fight against terrorism has to be unrelenting and across all fronts, legal adviser at India’s Permanent Mission to the UN, Kajal Bhat, said all member states must fulfil their obligations enshrined in international counter-terrorism instruments and conventions.

“Let me express my dismay that Pakistan has once again misused this august forum to repeat at ad nauseam their litany of lies,” Bhat said.

“Here is the biggest perpetrator and supporter of terrorism masquerading as its victim. We condemn their Pavlovian response wherever the name of India is mentioned and reject all their allegations and insinuations,” she said on Wednesday (6).

“Jammu and Kashmir is, and will always be a part of India,” she said.

“We call on Pakistan to stop cleansing their own minorities including Hindus, Christians, Sikhs, Buddhists and others,” Bhat added.

While some states lack the legal-operational frameworks and necessary Combating of Financing of Terrorism (CFT) capacities, others are “clearly guilty of aiding and supporting terrorism by providing financial assistance and safe havens to terrorists,” she said.

“We must enhance the capacities of the former, but must collectively call out the latter and hold them accountable,” she said.

As a member of the Financial Action Task Force (FATF), India is already in the process of upgrading its Financial Intelligence Network to ensure quicker referral of terror-financing cases to law enforcement agencies, she said.