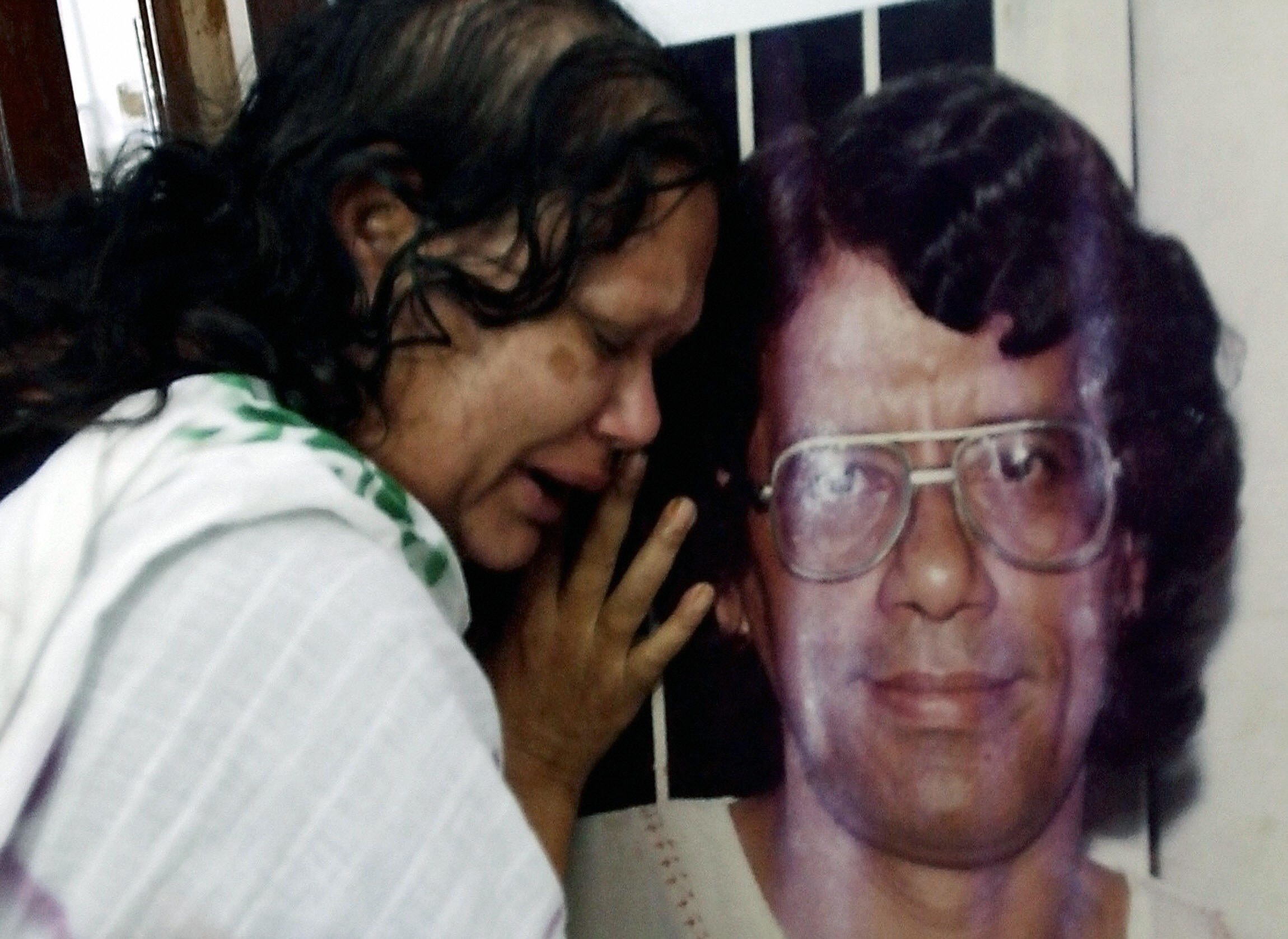 A female relative of Bangladeshi author professor Humayun Azad weeps next to his portrait upon receiving the news of his death in Dhaka, 13 August 2004. PHOTO/Farjana K. GODHULY
Follow Us

A Bangladesh court sentenced four extremists to hang Wednesday for their fatal machete attack on a celebrated writer, in a case that took nearly two decades to reach a verdict.

The men brutally maimed award-winning author and language professor Humayun Azad outside a book fair in 2004 — the first in a wave of violent attacks on free speech advocates in the Muslim-majority country.

Images of a blood-soaked Azad after the attack shocked the country, and a legion of fans mourned when the 56-year-old died several months later while seeking treatment in Germany.

Two of the attackers are still at large, and a fifth member was shot dead by police in 2014 after reportedly attempting to flee a prison van.

“Four were handed down the death penalty over the murder including two who were sentenced to death in absentia,” Abdullah Abu, chief prosecutor in the capital Dhaka, told AFP.

The perpetrators were members of Jamayetul Mujahideen Bangladesh (JMB), a banned Islamist outfit whose leader ordered Azad’s murder after the author penned a book that mocked and criticised fundamentalists.

The organisation was also responsible for a series of deadly bomb blasts around the turn of the century, and several senior members were executed in 2007.

Security outside the courtroom was tight, with dozens of officers standing guard.

Mizanur Rahman, one of the two men in custody over the murder, mocked reporters as he was led back into a prison van after the sentence.

“Journalist friends, are you satisfied? Did you get your desired verdict?” he asked.

The author’s daughter Mauli Azad welcomed the verdict and said authorities should chase down the two perpetrators still on the run.

“Though it took a long time to get justice, we are still happy,” she said.

“Now we want to see the execution as soon as possible.”

But other family members have expressed their dismay at the glacial pace of the trial.

Azad shot to fame in the 1980s as a regular columnist before branching out into novels and books of poetry.

He won the Bangla Academy Award, the country’s top literature prize, in 1986.

The writer’s murder was followed years later by a series of fatal machete attacks on secular and atheist writers as well as gay rights activists by a JMB offshoot.

Eleven years to the day after the attack on Azad, US-based writer Avijit Roy was hacked to death as he was leaving the same book fair.

Bangladesh has since launched a nationwide crackdown on Islamist groups, killing more than 100 militants in raids across the country and arresting more than 1,000 suspected extremists.