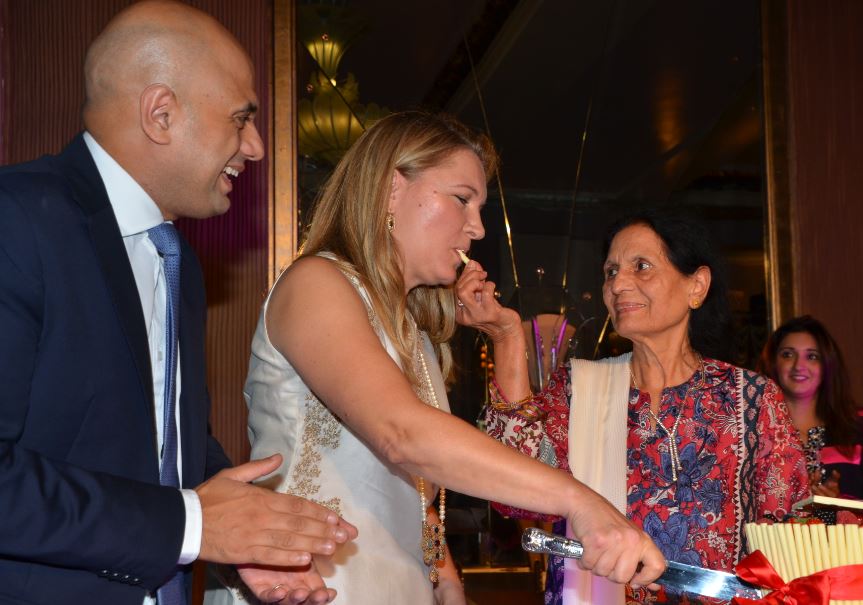 SAJID JAVID has written his “isolation diary” in the Spectator, expressing satisfaction that after more than a year in the political wilderness, he is back in the cabinet as health secretary.

Matt Hancock’s misfortune brought Sajid good luck. He reveals, “my mum was delighted – like many Asian mothers she wanted at least one of her five sons to be a doctor and she was thrilled that I would be, as she put it, ‘working in healthcare after all these years.

“My wife was concerned about the pressures of the role and what it might mean for our family.”

I remember both his mother, Zubaid, and wife, Laura, were present when Rami Ranger and Zameer Choudrey gave a party in 2018 after Theresa May appointed him home secretary, the first Asian to hold one of the great offices of state.

But when Sajid stepped down as chancellor in February last year after differences with Dominic Cummings, it was Rishi Sunak’s good luck to take over – and win plaudits as the cleverest man in government. It is entirely possible that “dishy Rishi” and “our Saj” may, one day, have to fight it out in order to be Boris Johnson’s successor.

In the middle of a pandemic, being health secretary is as important a job as chancellor, but Sajid mustn’t “cower” when confronting the Tory jihadis who have had their way in getting all lockdown measures lifted sooner than many medical experts would have liked.

Sajid has seemed a little too keen to keep in with the anti-lockdown extremists who control the far right of the Conservative party.

The dictionary definition of cower is “crouch down in fear”. After testing positive for Covid recently, Sajid had to isolate for 10 days, but announced he had made a “full recovery” and that his “symptoms were very mild, thanks to amazing vaccines”, of which he has received two doses.

“Please, if you haven’t yet, get your jab, as we learn to live with, rather than cower from, this virus,” he added.

The shadow justice secretary, David Lammy, one of many who questioned Sajid’s use of “cower”, wrote: “129,000 Brits have died from Covid under your government’s watch. Don’t denigrate people for trying to keep themselves and their families safe.”

And Devi Shridhar, professor of global public health at Edinburgh University, said his remarks would be “painful for those who were severely ill” or had lost loved ones. “Wanting to avoid getting Covid isn’t ‘cowering’ – it’s being sensible & looking out for others,” she tweeted.

Sajid apologised immediately for his “poor choice of word”. He must realise the government has to strike a delicate balance between getting life back to normal and keeping people safe.

Conservative Home commentator Andrew Gimson wondered: “How does one represent the views of the large number of people who did not feel in the slightest bit offended by what Javid wrote? It seems clear enough to many of us that he intended no harm.”

In his Spectator article, Sajid said: “While I didn’t hesitate to accept the role of health secretary, I’m acutely aware of the scale of the challenge we face. I decided from the outset to do everything I can to be straight with people about what lies ahead – the huge simultaneous tasks of tackling the NHS backlog, making the vital reforms we all know are needed to social care, and, of course, getting us out of this pandemic.”

Since taking over, he had “eaten samosas and spoken broken Punjabi in our care homes. Listening to frontline NHS and social care staff has been inspiring – and I am determined to do all I can to support them.”

“Although it is tempting to imagine a day where we can declare that the pandemic is over and quickly move on with our lives, the reality is that there will not be a big victory moment.

“This virus will still be with us in one form or another for the foreseeable future, and even if you’ve had both doses of a vaccine, there’s still a small chance that, like me, you can catch Covid – albeit with a far smaller chance of being hospitalised as a result. That’s why instead of fully releasing the handbrake – or as some might prefer, keeping us under state control forever – we’re encouraging a shift towards personal responsibility.

“This week, I haven’t been able to celebrate Eid with my mum, and I spent my 24th wedding anniversary unable to embrace my wife,” he went on.

“But as hard as it is, we must all persevere, and look out for one another – so we can protect the incredible progress we’ve made.”

There is an odd phrase at the end of his Spectator diary: “Written by Sajid Javid.”

Incidentally, Private Eye has had a little fun this week at Sajid’s expense. The cover shows Boris cowering away from a Sajid embrace.

“Are you sure this is a good idea?” asks the prime minister, to which Sajid replies, “I’m positive!”

THE court of appeal has set aside the wrongful conviction of Hasmukh Shingadia for stealing £16,000 from the Post Office.

It turns out the organisation’s Horizon computer was at fault and led to the prosecution of 736 sub-postmasters and sub-postmistresses across the country. There are now calls for the Post Office CEO, Paula Vennells, who was responsible for presiding over “one of the biggest scandals in British legal history”, to be stripped of her CBE. A more fitting outcome would be to see her and her senior executives jailed for 20 years.

I know Hasmukh and his wife Chandrika, who run a sub-post office from their Peach’s Store in the village of Upper Bucklebury in west Berkshire. They were invited to the wedding of Prince William and Kate Middleton on April 29, 2011, because their customers included the bride’s parents, Michael and Carole Middleton. He cleared Chandrika to wear a sari to the ceremony in Westminster Abbey.

I drove down to see Hasmukh and Chandrika and their daughters, Meera and Maya, just a few days before the wedding. They were a traditional Gujarati family who lived above the shop.

They showed me the elaborate wedding invitation card which they have retained. Being Indians felt they couldn’t go without wedding presents.

So, I arranged for a couple of Indian designers to send in outfits for the Duchess which her father picked up from the shop. One was a silver-chain dress made by Rishti Dewan, who now lives in California.

While Hasmukh wore a morning suit, Chandrika flew to Gujarat to buy a blue sari. She told me she was complimented by David Emmanuel, who had designed Princess Diana’s famous wedding dress with his former wife, Elizabeth Emmanuel: “‘Oh, my God! What a beautiful sari.’ Considering who he was, it was a great compliment.”

I was shocked when a couple of months after the wedding, Hasmukh was told he would be prosecuted unless he pleaded guilty to theft.

I wish he had taken me into his confidence when I had gone to see him. I could have urged him to contest the charge. He was not jailed, but given a two-year suspended sentence and and told to pay the £16,000 he hadn’t stolen. He was made to carry out 200 hours of community service by working at a local Sue Ryder charity shop. His reputation was, of course, ruined.

Since the slate was wiped clean, the Duchess of Cambridge’s father has dropped by to say, “Well done.”