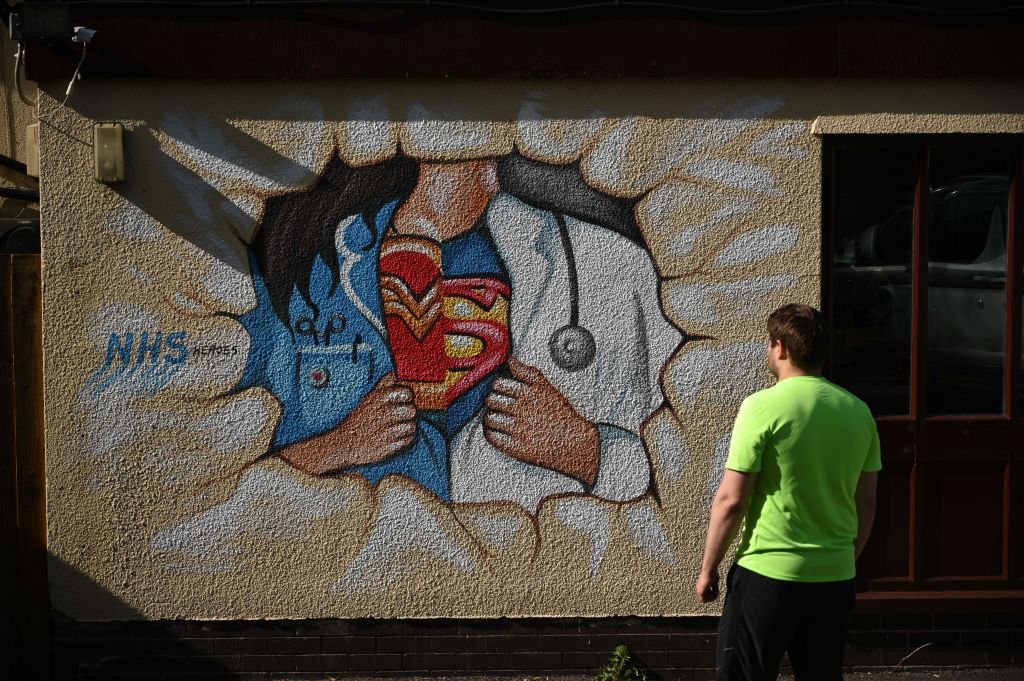 FILE PHOTO: A man looks at graffiti depicting the badge of a superhero under a nurse’s and doctor’s uniform in homage to the efforts of NHS staff during the coronavirus crisis on a wall in Pontefract, northern England on April 14, 2020. (Photo by OLI SCARFF/AFP via Getty Images)

A NEW survey has revealed that more than a third of NHS doctors have recently experienced verbal abuse including threats, The Guardian reported.

Treatment delays and changes to the health service during Covid have increased abusive behaviour towards staff, it added.

The British Medical Association (BMA) survey said that half of all medics have also seen NHS colleagues such as nurses and fellow doctors being abused or assaulted, The Guardian report added.

The culprits were patients or their friends or relatives who accompanied them to an appointment.

Doctors said that abuse occurred most often in their consulting rooms while hospital doctors said it happened on the wards.

“We get shouted at, spoken to harshly and called unkind and unhelpful, often for things that are not within our control, such as hospital waiting lists, and the fact that we have to ask people to be considerate of others to keep everyone safe, by doing things such as getting tested for Covid, and not coming in when they have Covid symptoms,” one female GP partner in the south-west, told the newspaper.

“Our local practice managers are so distressed by the unrelenting complaints and poor behaviour that they are leaving in droves.”

The BMA surveyed 2,400 doctors in England, Wales and Northern Ireland earlier in July. It found that while 37 per cent of respondents had experienced abuse first-hand in the preceding month, many more GPs (51 per cent) than hospital doctors (30 per cent) said they had. In addition:

Hospital medics had most often seen nurses being abused while 96 per cent of GPs said verbal hostility was usually directed at receptionists.

“The last year-and-a-half has been an incredibly challenging time for both doctors and patients, and many doctors share the frustration of their patients around unfamiliar ways of working, or if waiting times are too long,” said Dr Richard Vautrey, the chair of the BMA’s GP committee.

“However, abuse, violence and threats are absolutely unacceptable and should never be tolerated.”

Dr Vishal Sharma, the chair of the union’s consultants committee, told The Guardian: “We understand that when people interact with the health service, they are often in pain and distressed – with the Covid-19 pandemic increasing feelings of apprehension due to services working in different ways, or some treatments being delayed.

“However, we cannot let people take out their frustration at a system on individual doctors or their colleagues who truly are doing their best in the most difficult of situations.”

An NHS England spokesperson said: “It is not acceptable that NHS staff – who have devoted their days, nights and weekends to protecting patients in one of the most challenging environments ever faced – are experiencing abusive, intimidating and violent behaviour.”