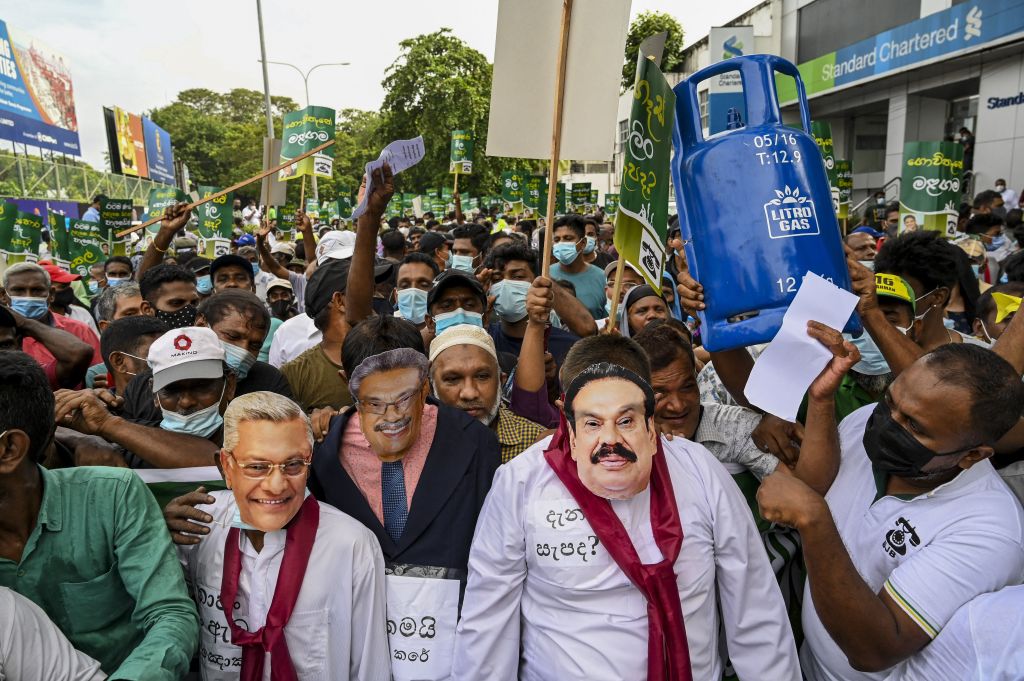 Sri Lanka’s main opposition activists wearing masks of the country’s president Gotabaya Rajapaksa and prime minister Mahinda Rajapaksa take part with others in a demonstration to denounce the shortage of cooking gas, sugar, kerosene and a few other commodities as the country faces a major foreign exchange crisis, in Colombo on November 16, 2021. (Photo by ISHARA S. KODIKARA/AFP via Getty Images)

SRI LANKA is investigating a sharp rise in kitchen explosions caused by cooking gas that have reportedly killed at least one person and wounded dozens of others, parliament heard Monday (28).

The island is in the grip of an economic crisis with serious shortages of fossil fuels and other essential goods because of depleted foreign currency reserves.

“During a short space of time there has been a very sharp increase in gas accidents,” he said.

“We don’t want to have 10 to 15 homes blowing up daily, so I have ordered an investigation.”

An official in Sri Lanka’s consumer affairs agency, who asked not to be named, said higher concentrations of propane were increasing pressure on LPG cylinders, causing leaks that led to explosive fires.

Police have denied the death was due to a gas leak.

Sri Lanka’s only oil refinery shut for the first time in its 52-year history this month because it could not source dollars to import crude.

A resulting foreign exchange shortage prompted authorities to shore up Sri Lanka’s trade imbalance with a broad ban on imports, including some food and agricultural products.

That decision eventually sparked food shortages, with supermarkets rationing rice and the price of some staples doubling earlier this month.