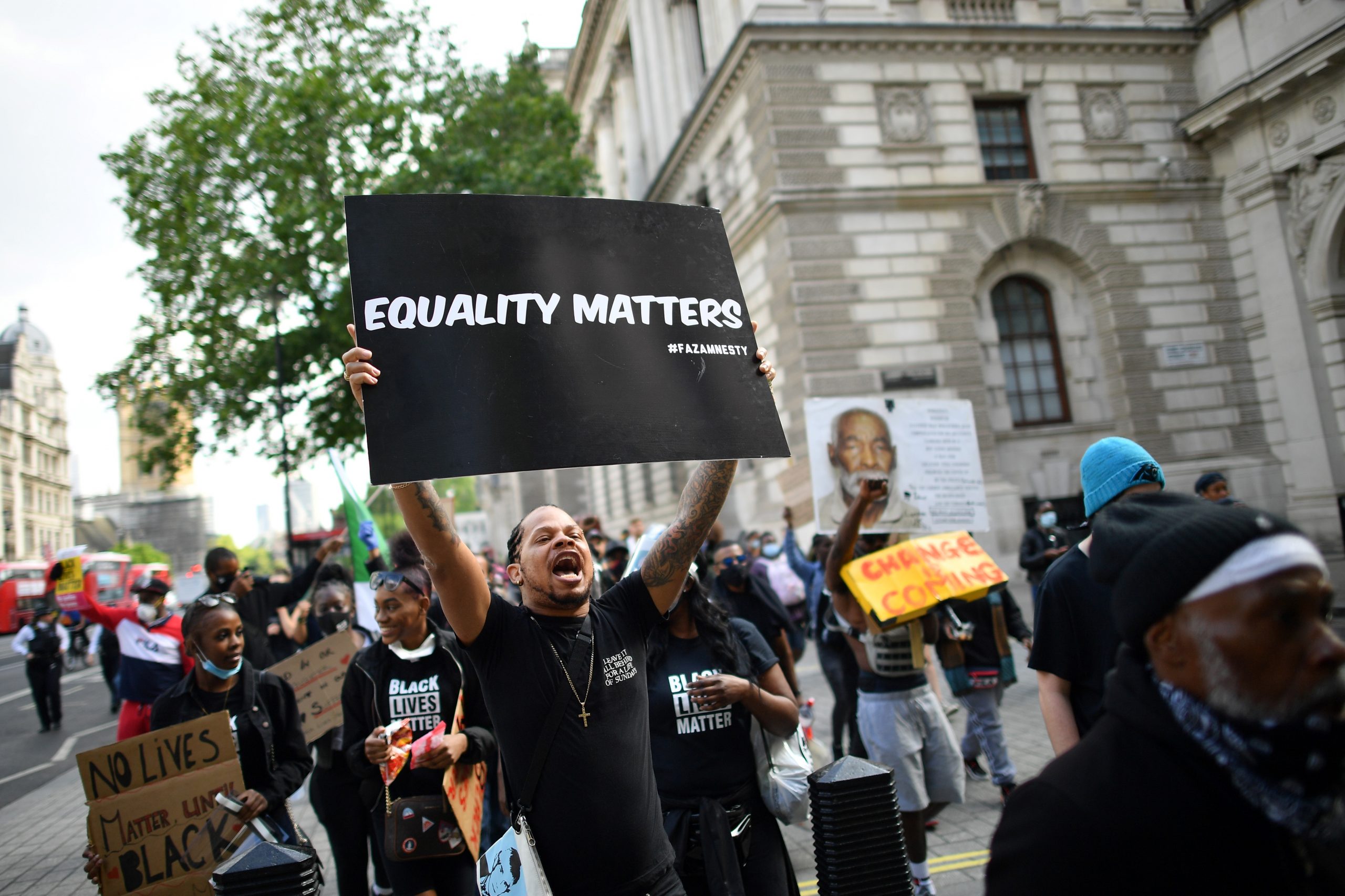 EQUALITY: Discussions on race equality have been heightened in recent years, especially following the rise of the Black Lives Matter movement. (Photo by JUSTIN TALLIS/AFP via Getty Images)

How can higher education students be aware of the brutal inequalities and hypocrisy they may encounter in the corporate world?

In a world of increased awareness around identity and multiple ethnicities, a generic term like Black Asian Minority Ethnic’ (BAME) fails to reflect the voices and values of the groups it seeks to represent.

The Racial Commissions report published by the UK cabinet office, has recognized the need to scrap the BAME label. The widespread usage of this term (BAME) has led to an oversight of its authentic meaning. Thus, raising doubts as to whether it truly reflects the minority ethnic communities by making everyone feel represented in society.

The BAME term reinforces discrimination and does not represent cultural identities, or the distinct challenges faced by these communities. For example, The Black Lives Movement highlighted the ongoing and widespread prejudice currently present towards the black community.

This was further heightened by the death of George Floyd purely because of the colour of his skin. He died from asphyxiation, caused by Derek Chauvin (ex-Minneapolis Police officer) who blocked his airwaves. The father of a young child had lost his life and his murderer is only paying less than twenty-three years in prison.

This tragedy helps to unravel the devastating legal system embedded into our economies. Where crimes are overlooked due to an individual’s colour and social status. Had it been an individual of colour, in Derek Chauvin’s instance, they would have faced a life sentence.

Furthermore recently, the Asian community has faced a backlash in the form of extreme discrimination/ personal attacks by the public. Public figures like Donald Trump, have labelled the Covid-19 disease as the “Chinese Virus”. Thus, not only should the use of the acronym be eradicated from being used in the media, but is inappropriate jargon for representing diversity on any individual, small, mediocre, or large scale/ for culture or ethnicities or communities.

Why we are choosing to disregard the BAME term

The student group representing the interests of this community in the School of Business and Management at Royal Holloway (RHUL), have discarded the BAME label and are now embracing DIA (Diversity Inclusion and Acceptance) for several reasons.

First, the persistent presence of a generic term like BAME disregards the rich diversity that exists amongst ethnic minority communities by treating all ethnicities as a homogenous group and hence reinforces the stereotypes and lack of awareness about this group. Specifically, the RHUL students felt that being referred to as BAME ambassadors limited the representation of the diverse collection of ethnicities and cultures that is evident amongst the Royal Holloway Students.

In contrast, DIA more accurately reflects the richness and beauty of individual back grounds, in terms of languages, culture, religions, customs and ideologies at Royal Holloway.

Furthermore, the label BAME has had very negative connotations in the media. Historically, it has been associated with representing, for instance, statistics in which “BAME” students are disadvantaged. Individuals are perceived as disadvantaged in terms of the attainment gap. A recent study based on 55 semi-structured interviews with Royal Holloway students by the DIA student cohort indicated that there was a perceived attainment gap at 74.54 per cent in the School of Business and Management.

Whilst it is important to extend the necessary support by making necessary changes in the curriculum, care must be taken to ensure students do not feel patronised by reinforcing these stereotypes. Whilst these initiatives to support disadvantaged students may be well intentioned, if they are not implemented carefully, it can result in reinforcing negative stereotypes affecting minority ethnic students’ self-confidence/ image.

Finally, the term BAME failed to demonstrate a celebration of togetherness, originality, and diversity of ideologies, skills talents, and values that we represent.

Whereas DIA better captures the values/aim of upholding the interests of the diverse minority group of students and to give them a voice, whilst educating and removing unfair stereotypes surrounding our communities.

We intend to do so by creating an awareness and above all making a positive difference in the world. Rather than upholding and reinforcing the misconceptions and stereotypes that dominate popular media headlines we must celebrate our individuality by realizing our potential. We are enlightened minds and should be unfettered by artificial limitations imposed by superficial labels related to the colour of our skin or gender. We hope DIA celebrates and embraces these differences.

The BAME acronym may be used by organisations as a passport to access wider representation of diversity, without having to take much action at all. Hence, potential employees and especially students must be aware of the several organisations that seem to misuse the BAME term rather liberally. It is seen as a mere tick box exercise to fulfill the legislative requirements in diversity quotas and gain leverage from it without making any substantive qualitative differences to the ethnic communities at the workplace.

Consequently, projecting a more tolerant society that exists in theory but not in practice. This makes one question the integrity of the recent initiatives. In a world of Instagram and marketing where appearances and image matter and translates into financial gain, is this just another marketing strategy that will gain financial leverage without making a difference?

Therefore, it is recommended that before applying to work for any corporation, research how the company represents of Diversity, Inclusivity and Acceptance amongst their employees and how many of them are in managerial positions. Coming across as embracive will only cause your interviewer to admire your integrity and beliefs.

As we have educated ourselves within our student collective, we have understood that there is strength in diversity.

The Racial Commissions Report 2021 being published after The Black Lives Matter Protest is testimony to the fact that change is brought about if fought for it.

The ongoing oppression that minorities face should not be trivialized by using the ‘generic’ term BAME. The presence of these atrocities, such as the genocide in East Turkestan of Uyghur Muslims has just recently been brought to light. As this eradication of identity has finally been recognised as a genocide by the UK Parliament. One can argue that this recognition may have been delayed as this genocide began early on in 2014 and it has taken 7 years to be noticed. Change must be made now, before all else fails.

There has also been a genocide in Sri Lanka where Tamils and Muslims have been facing structural oppression and ethnic cleansing since the end of the British Independence in 1948. Its only in times of need where struggles have been highlighted.

But what has been done to make a difference? Thus, changing our Student Cohort group name to DIA, is the initial step in the right direction. After all, a journey of a thousand miles starts with a single step.

To conclude, the concept of Diversity Inclusion and Acceptance is built on the intrinsic values of celebrating our individuality as human beings in doubt with creative minds and limitless potential. Thereby transcending superficial labels that society and legislation imposes on us. In addition, labels based on gender and ethnicity create divisions rather promoting cohesion, equality, and tolerance. Which is why RHUL DIA student cohort is here to embrace.

It is here to stay.