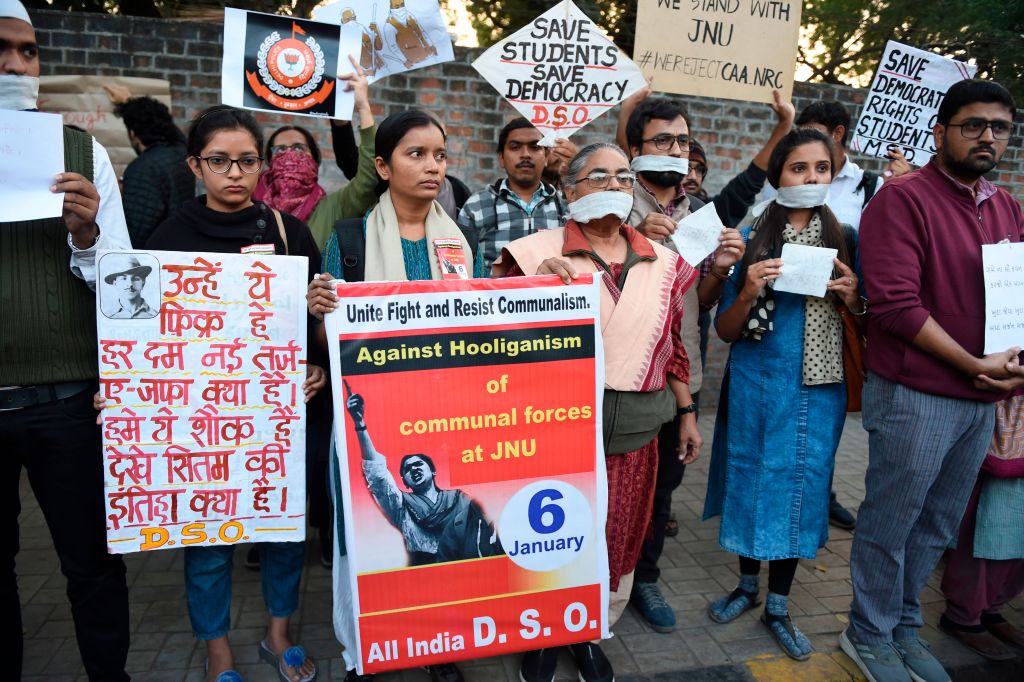 Students and supporters hold placards during a protest against an attack on the students and teachers at the Jawaharlal Nehru University (JNU) campus in New Delhi a day before, outside the Indian Institute of Management (IIM) in Ahmedabad on January 6, 2020. – Protests were held across India on January 6 after masked assailants wielding batons and iron rods went on a rampage at a top Delhi university, leaving more than two dozen injured. (Photo by SAM PANTHAKY / AFP) (Photo by SAM PANTHAKY/AFP via Getty Images)
Follow Us

Protests were held across India on Monday (6) after masked assailants wielding batons and iron rods went on a rampage at a top Delhi university, leaving more than two dozen injured.

Controversy over Sunday’s violence at Jawaharlal Nehru University (JNU) comes as a new challenge to the government as it confronts major nationwide protests against a new citizenship bill that critics say is anti-Muslim.

Some students blamed the university attack on right-wing activists, but they also accused police of doing nothing to stop the violence.

At least 28 students and teachers were injured, while doctors and nurses from a nearby hospital who went to treat them were also attacked, their union said.

Scores of riot police on Monday patrolled the university — the alma mater of several key ministers in prime minister Narendra Modi’s cabinet — picking their way past shattered glass and broken doors and furniture.

They made no immediate arrests, but blamed the violence on “rival student groups”.

As condemnation of the attacks spread, more than 1,000 people held a vigil in Mumbai. Other demonstrations were held in Bangalore, Kolkata and other major cities.

Nobel economy prize winner Abhijeet Banerjee, a former JNU student, said the attacks had “echoes of the years when Germany was moving towards Nazi rule”.

Modi’s Bharatiya Janata Party denied claims by the opposition Congress that it was responsible, and in turn blamed left-leaning student groups which dominate the university’s politics.

The government has promised an investigation, while home minister Amit Shah — a close Modi aide — told university administrators and police to maintain order at the campus, which has been tense since protests in November over fee increases.

The unrest comes as nationwide protests continue against a citizenship law passed in December that bars Muslims from a measure granting nationality to minorities from three neighbouring Islamic-majority countries.

Hundreds of thousands of people have taken to the streets across the country, and more than 25 people have been killed.

The street protests have further divided a country that gave Modi a landslide return to power in May last year.

Modi’s opponents blame his policies for the country’s sluggish economy and social unease.

India’s leading trade unions Monday called for a general strike on January 8 to protest against the government’s “anti-people” policies. More than 60 student unions have supported the one-day strike.