Barbara Woodward stated that the UK also supports an expansion of the non-permanent category of membership, taking the Security Council’s total membership to somewhere in the mid-20s. 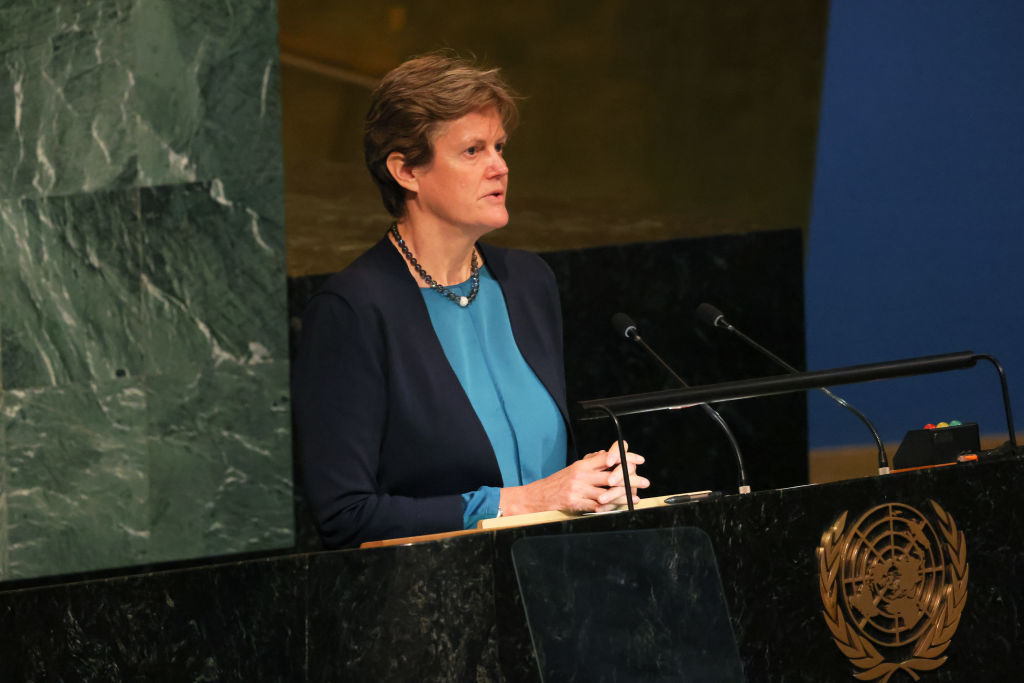 British Permanent Representative to the European Union Barbara Woodward speaks during a meeting of the General Assembly for a special session in the General Assembly Hall at United Nations Headquarters on November 14, 2022 in New York City. The UNGA continued its Eleventh Emergency Special Session to hold a vote on a draft resolution brought by the Permanent Representative of Ukraine to the United Nations Sergiy Kyslytsya, calling for the UNGA to create an “international register” to document claims of damage, loss, or injury to Ukrainians caused by Russia. (Photo by Michael M. Santiago/Getty Images)
Follow Us

The United Kingdom has reiterated its support for the creation of new permanent seats in the United Nations Security Council (UNSC) for India, Germany, Japan and Brazil and also called for the expansion of the council in both permanent and non-permanent categories.

Addressing the UNSC’s annual debate on Security Council reform on Thursday, UK Ambassador to the UN Barbara Woodward said, “Our position is well known. The United Kingdom has long called for the expansion of the Security Council in both the permanent and non-permanent categories.

“We support the creation of new permanent seats for India, Germany, Japan and Brazil, as well as permanent African representation on the Council,” she further said.

Woodward stated that the UK also supports an expansion of the non-permanent category of membership, taking the Security Council’s total membership to somewhere in the mid-20s.

The General Assembly opened its annual debate with speakers renewing their appeals for enlarging the 15-member organ and updating its working methods to make it more transparent, inclusive, representative, accountable and effective in a world gripped by a cascade of interlocking crises.

Meanwhile, India’s Permanent Representative to the UN, Ambassador Ruchira Kamboj spoke on behalf of the G4 countries including Brazil, Germany and Japan. She voiced her regret over the lack of substantive work after four decades of equitable representation.

“Representation is an inescapable precondition for legitimacy and effectiveness,” she said, adding that the longer Council reform is stalled, the greater its deficiency in representation.

“The longer the Security Council reform is stalled, the greater its deficit in representation. And representation is an inescapable precondition for its legitimacy and effectiveness,” she added.

“This will not be achieved without enhancing the membership in both categories. Only this will enable the Council to effectively manage today’s global conflicts and increasingly complex and interconnected global challenges it faces today,” she added.

Ambassador Kamboj said the G4 has been consistently asking for a single consolidated text and for renewed working methods to bring about an open, inclusive and transparent process, with webcasting, record-keeping and the application of the rules of procedure of the General Assembly.

“A single consolidated text, preferably with attribution, is the only means to move away from the cycle of repetition of well-known positions that have been the trademark of the IGN (Intergovernmental Negotiations) in the recent past,” she said.

Reiterating G4’s position, India’s senior diplomat said the four nations uphold the need for a comprehensive reform of the Security Council, with the expansion of seats in both categories of membership, equitable regional representation, more transparent and inclusive working methods and an enhanced relationship with other UN bodies, including the General Assembly.